HomeNewsMicrosoft now envisions Teams as the ‘gateway to the metaverse’
News 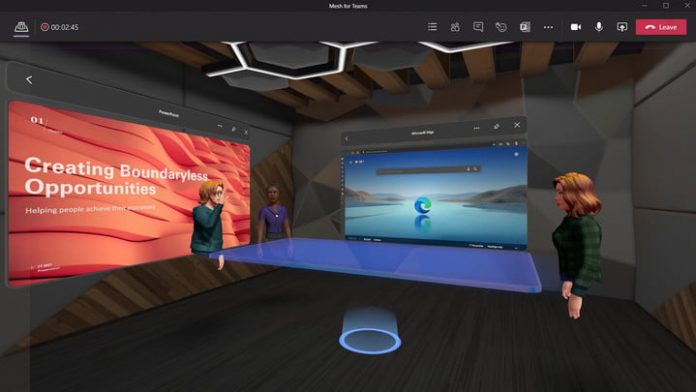 Microsoft has announced a new feature for Teams that transforms the collaboration tool into its own version of the metaverse. The announcement came out of the Microsoft Ignite conference, just days after Facebook (now known as Meta) announced its own initiative to make the futuristic idea of the metaverse a reality.

The technology being brought over to Teams is called Mesh, which is Microsoft’s own mixed-reality platform, and is used in devices such as the HoloLens. So, what will it be doing in Teams? Well, Microsoft wants to make meetings feel more personal, immersive, and efficient, as well as make remote and hybrid meetings more collaborative.

A bit like the reasoning behind Facebook’s rebrand to Meta, Microsoft envisions the multiverse as the next version of the internet. Since Microsoft says a new metaverse is now inhabited by digital twins of people, Mesh in Teams will purportedly be a way to allow people to gather to communicate, collaborate and share via a personal virtual presence on any device.

One of the ways it does that is to let people use a customized avatar of themselves in a meeting instead of using a static picture or video or having a webcam turned on. Microsoft says that anyone will be able to access Mesh for Teams on standard smartphones, laptops, and even mixed-reality headsets. It is all about letting Teams users feel involved and engaged without having to be on camera.

You can send an avatar to a Teams meeting in lieu of your webcam feed.

“Ongoing studies in Microsoft’s research organization prove this out:People feel more present and engaged in meetings when everyone turns on their video cameras, for example,” says John Roach, executive architect for Digital Transformation Services, in a press release. “But the video option can be awkward and binary – on or off. Too many people, too much of the time, are a static picture or bubble with initials.”

So yes, for starters, you can send an avatar to a Teams meeting in lieu of your webcam feed. According to Katie Kelly, a principal project manager at Microsoft, Mesh avatars will have moving hands, facial expressions, and animated faces. Mesh will use your audio and video to do this, as well as Microsoft’s A.I. technologies, to bring that avatar to life. When you want it, Teams can use the camera to approximate where your mouth is and mimic your head and facial movements.

But Microsoft’s loftier implementation of Mesh goes beyond that simple use case. You can also take your avatars into a completely virtual meeting space, and toss on a VR headset while you’re at it for full immersion.

“Remote workers are far more efficient than most business leaders ever imagined, and they miss each other,” says Roach. “They miss hallway moments, kitchen catch-ups and chance encounters. They miss the body language from across the conference room table that says things that can’t be said.”

Organizations can even create their own digital immersive experiences within Teams, so Teams users can take their avatars into these spaces and mix, mingle, and collaborate. This is where Microsoft hopes to build its own bubble multiverse, a truly virtual office or classroom that recreates the experience of being somewhere physically.

Microsoft plans to launch Mesh for Teams over time with a set of prebuilt immersive spaces, supporting a wide range of contexts from meetings and social events. Some sample situations of Mesh in Teams include a design firm using the space for a virtual wall to keep customer pictures, or using it to keep a whiteboard for color-coded tasks, and even showcasing product prototypes on tables.

Rolling out in preview in the first half of 2022 and building on existing features like Together Mode and Presenter view, Microsoft hopes Mesh in Teams can make remote and hybrid meetings more collaborative.

Mesh for Teams is just one feature Microsoft is working on for the new year. At the November edition of the company’s Ignite 2021 conference, a host of other features for Microsoft 365 were announced covering other areas of Teams, as well as Word, and Office.

In Teams, those new features include a new chat with self feature to let you send ideas and reminders, as well as chat density, which lets you see how many chats you want. There’s also a compact mode to let you minimize the need to scroll up and down by fitting 50% more messages on the screen. Other features icclude new emojis and reactions that were teased a few months ago. Delayed delivery of messages and a new search results page cap out the new features for Teams rolling out between now and early 2022.

As for Office.com and Office, Microsoft is updating the experience on Office.com and the Office app for Windows to serve as a hub for files, content, and apps. With the updates, users can easily find content across multiple file types, whether they are stored in the cloud or shared through Microsoft Teams or Outlook.

Smart Alert in Outlook and Recording Studio in PowerPoint cap out the list of new consumer features. Smart Alert is in preview for developers and can eventually be used to alert you before you send an email or appointment on ways to help improve it. And with Recording Studio in PowerPoint, Microsoft is helpingto make recording your presentations easier.