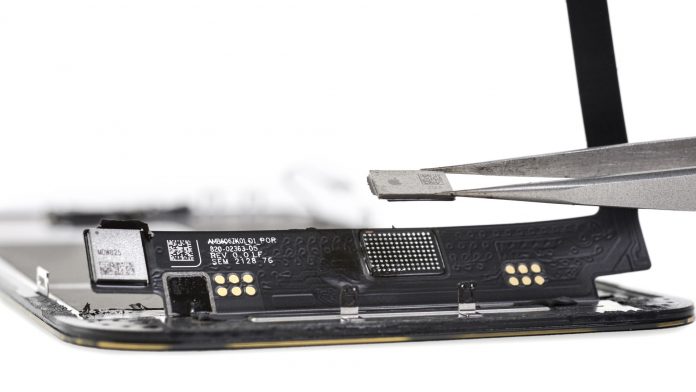 An inability to replace the iPhone 13’s display without breaking Face ID could have a major impact on companies that offer iPhone repairs, iFixit said today in an article advocating for Right to Repair laws.

iFixit first pointed out this repair issue in its iPhone 13 Pro teardown, and has confirmed it with multiple tests. Replacing the display of the ‌iPhone 13‌ renders Face ID non-functional, so at-home repairs are not an option. Swapping an ‌iPhone 13‌’s display with a display from a new ‌iPhone 13‌ results in an error message that says “Unable to activate Face ID on this ‌iPhone‌.”

An ‌iPhone‌ display repair, which could previously be done with hand-held tools, now requires a microscope and microsoldering tools or access to Apple’s Independent Repair Provider Program, which repair shops have criticized for its “draconian” contracts and requirements.

At issue is a small microcontroller that pairs the ‌iPhone 13‌ to its display. Apple does not have a tool that allows ‌iPhone‌ owners or repair shops not affiliated with Apple to pair a new screen to an ‌iPhone 13‌. Authorized technicians who do work with Apple need to use Apple Services Toolkit 2 to log a repair to Apple’s cloud services, thereby syncing the serial numbers of the ‌iPhone‌ and the display.

Some repair shops have found a workaround, but it is difficult and work intensive. A soldered chip must be moved from the original screen to the replacement, which iFixit says is “completely unprecedented” as screen repair is “incredibly common” and accounts for a good amount of the revenue that independent repair shops bring in.

iFixit says that Apple’s decision to disable Face ID with a screen repair could cause small repair outlets to shut down, spend thousands on new equipment, or lose out on Apple repairs. The site also does not believe that the Face ID repair issue is an accident, as Apple has previously introduced similar repair restrictions for Touch ID, True Tone functionality with display repairs, and iPhone 12 cameras.

Technically, yes: Face ID failure could be a very specific hardware bug for one of the most commonly replaced components, one that somehow made it through testing, didn’t get fixed in a major software update, and just happens to lock out the kind of independent repair from which the company doesn’t profit.

More likely, though, is that this is a strategy, not an oversight. This situation makes AppleCare all but required for newer iPhones, unless you happen to know that your local repair shop is ready for the challenge. Or you simply plan to never drop your phone.

Other independent repair shops that iFixit spoke to believe that Apple has implemented this change in an effort to “thwart a customer’s ability to repair,” directing ‌iPhone‌ owners to Apple retail locations or Apple Authorized Service Providers for help with their displays.

With the ‌iPhone 12‌, camera repairs initially required Apple’s proprietary system configuration tool to function properly, and cameras that were replaced were non-functional. Apple addressed this issue with an update that notifies customers that the camera in their device might not be genuine, but doesn’t disable it entirely. Apple could do something similar for Face ID in a future update, but it’s not clear yet if that will happen.

Customers with an ‌iPhone 13‌ would be best served by visiting an Apple Authorized Service Provider or an Apple Store for any kind of repair due to the difficulty of display replacements and the potential for Face ID failure. Without AppleCare+, display repairs are expensive, priced between $229 to $329 for Apple’s ‌iPhone 13‌ models.Related Roundups: iPhone 13, iPhone 13 ProTag: iFixitBuyer’s Guide: iPhone 13 (Buy Now), iPhone 13 Pro (Buy Now)Related Forum: iPhone
This article, “iPhone 13 Screen Replacements Can Break Face ID, a Repair Restriction iFixit Calls ‘Completely Unprecedented'” first appeared on MacRumors.com

Apple Stores to Drop Mask Requirement for Customers in Many U.S. States