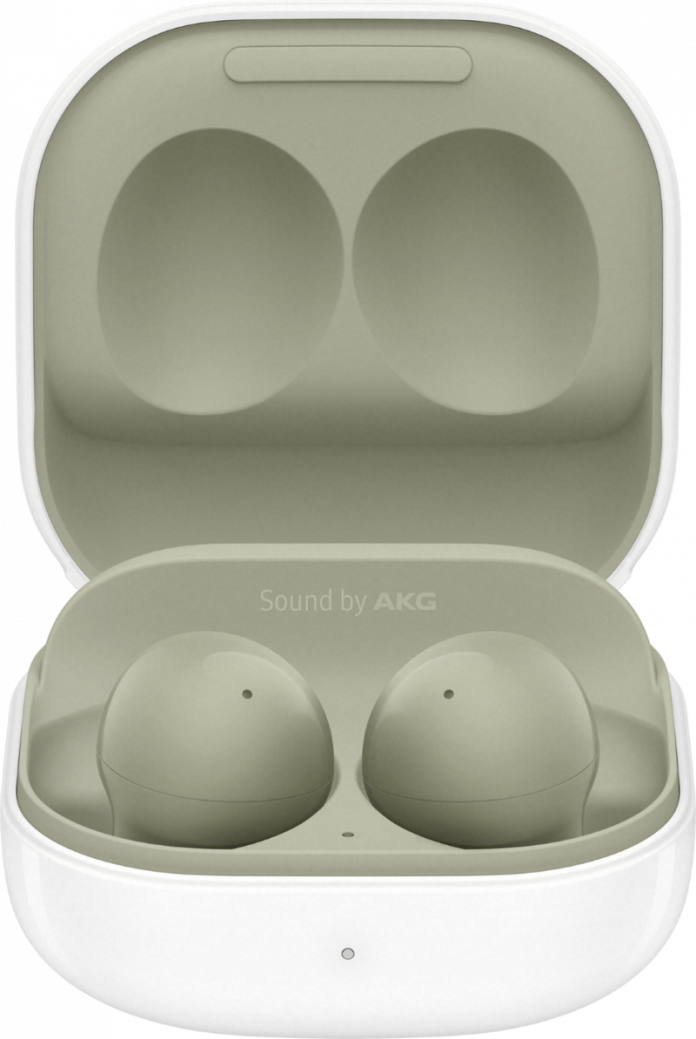 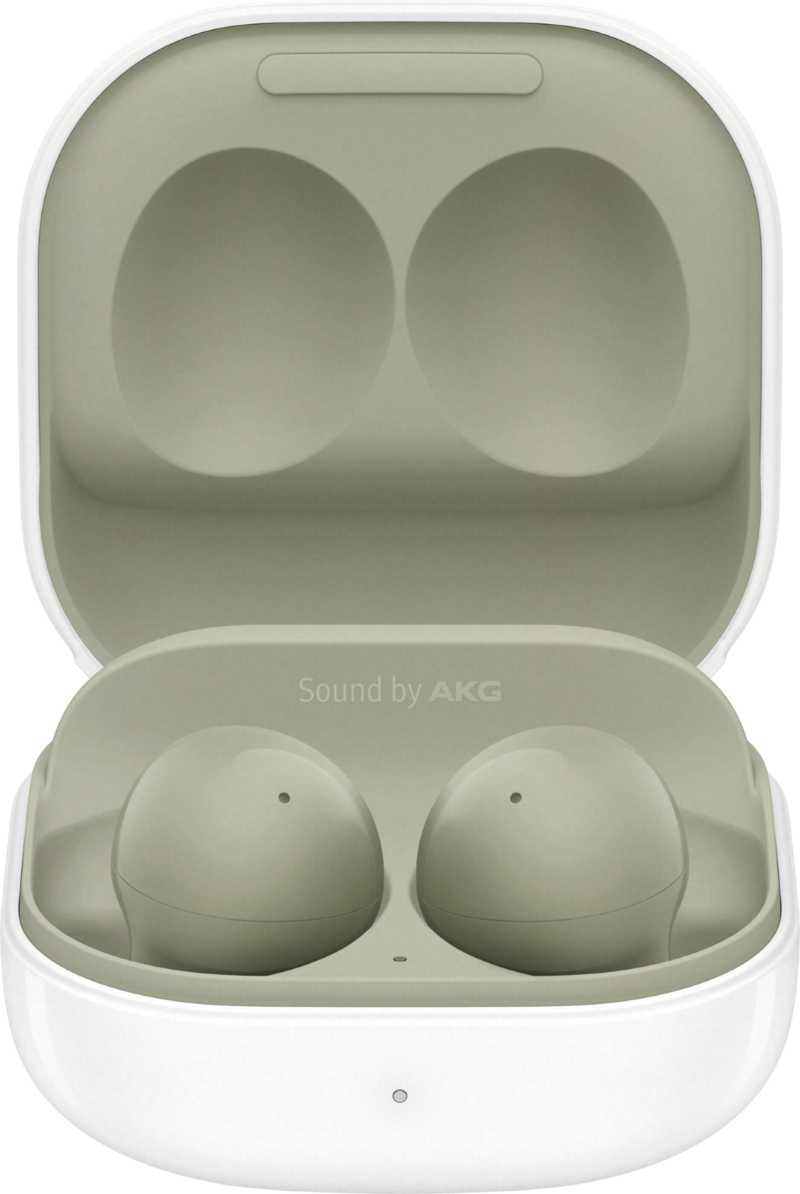 Samsung trimmed down the original Galaxy Buds to make the Galaxy Buds 2, and it makes a real difference in fit and comfort. It also added solid audio performance to round out an effective package anyone can enjoy. You shouldn’t use these for strenuous workouts, but you will like that you get more features in spite of the smaller frame. 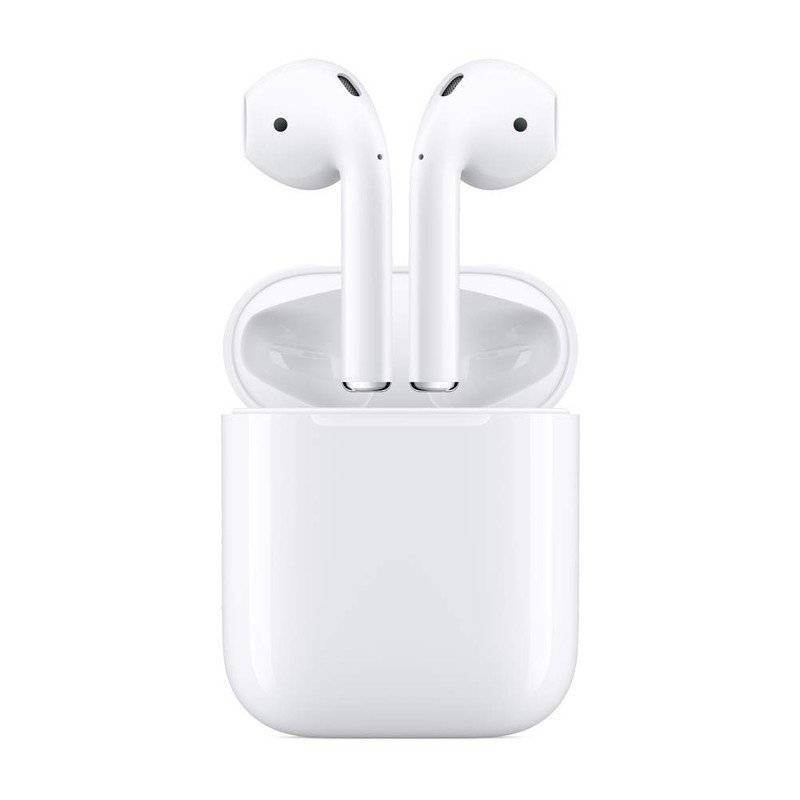 Apple breathed real life into the wireless earbuds category with the AirPods, and they continue to be ubiquitous because of their convenience. However, they no longer carry the same weight against other pairs because the sound quality and passive noise isolation could be better.

Apple and Samsung are always up against each other in one way or another, so why not another wireless earbuds shootout? These are both sequels, but they’re also somewhat sequential because they didn’t come out at the same time. The Galaxy Buds 2 came out in 2021, whereas the AirPods (2nd Gen) dropped into Apple’s lineup in 2019. Two years makes a big difference in this category, and contrasts stand out even more when diving into what each pair can do. 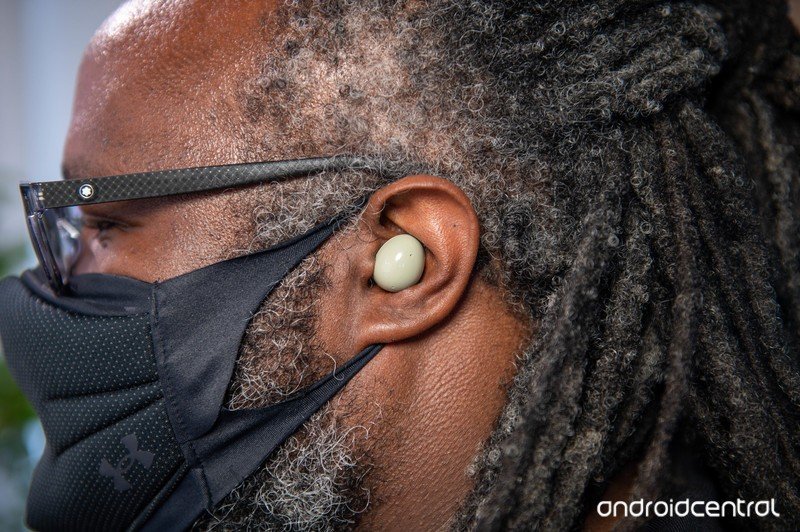 The differences are already apparent just looking at their respective specs. Apple has only ever put active noise cancelation (ANC) in the AirPods Pro, leaving its standard AirPods to make due without any noise control. For Samsung, the Galaxy Buds 2 are actually the third iteration, following the original Galaxy Buds and the Galaxy Buds+, and the first to have ANC for the company’s entry-level earbud lineup.

Despite these differences on paper, both earbuds roughly cost the same. They also have proprietary features made to work with their own product ecosystems. Cross platforms between them, and things get a little muddy along the way.

To start with, neither of these earbuds are especially durable. Samsung barely even bothered to give the Galaxy Buds 2 a modicum of water resistance, which is worth knowing if you plan to exercise while wearing them. Likewise, the AirPods (2nd-Gen) are a toss-up on whether they can withstand much punishment during workouts. For me, neither pair engenders confidence in those types of scenarios.

The launch gap — plus two preceding iterations — gave Samsung plenty to figure things out with the Galaxy Buds 2, not to mention the Galaxy Buds Pro and the influence they hold over these. earbuds. Longer battery life, better connectivity, bigger drivers, ANC, ambient mode, wireless charging — it’s all there. And all of those things trump the second-generation AirPods. 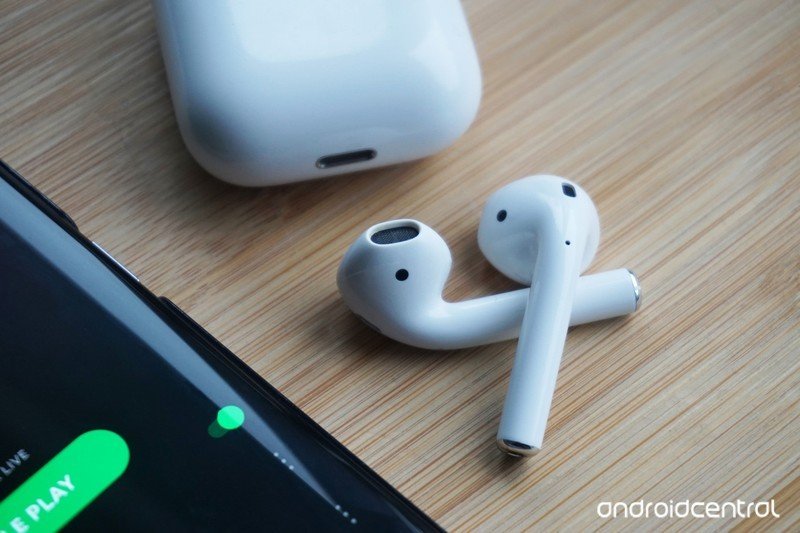 So, why even compare them? It’s because the nuances matter, and based on these specs, Samsung should win that, hands down. That’s undoubtedly true for Android users, where the Galaxy Buds 2 are more in tune with Google’s operating system. It’s not just how fast they pair; it’s also how well they perform in some key respects.

For example, the Buds 2 just sound better than the AirPods. The drivers make that clear playing anything on them, though fit and comfort are equal contributors. As is usually the case, Samsung uses ear tips to help you determine which size gets you the best seal, which is the best way to preserve as much of the bass as possible. They’re also one of the most comfortable pairs of earbuds Samsung produced to date. It also offers some equalizer presets (EQ) in the Galaxy Wearable app, which you, unfortunately, can’t manually tune to your own custom sound preferences, but at least you get something.

The AirPods (2nd Gen) do none of that. The open-fit design proves problematic when it comes to isolating audio content from the outside world. Without ear tips, you can’t do much to adjust the fit and seal as a remedy. Not only that, but custom options are limited and practically non-existent for non-Apple users. An ambient mode isn’t necessary because of how much sound passively leaks in anyway, and as for ANC, you realize quickly that the fit you end up with in your ears is as good as it’s going to get for Apple’s earbuds.

The open-fit design proves problematic when it comes to isolating audio content from the outside world.

And yet, despite missing all those features, the AirPods are poorer on battery life. Leave ANC on, and the Buds 2 can go for six hours, give or take, whereas the AirPods only max out at five hours but usually do less because you have to raise the volume when it gets busy around you. You do get more juice out of the AirPods charging case, but it’s a moot point if they don’t last as long per charge for a number of reasons.

Onboard controls are probably a wash, though Apple might be a little more consistent. Samsung is getting better in this area, and it shows with the Buds 2. Both pairs rely on touch controls that sometimes act finicky but get the hang of them, and you’ll be alright. 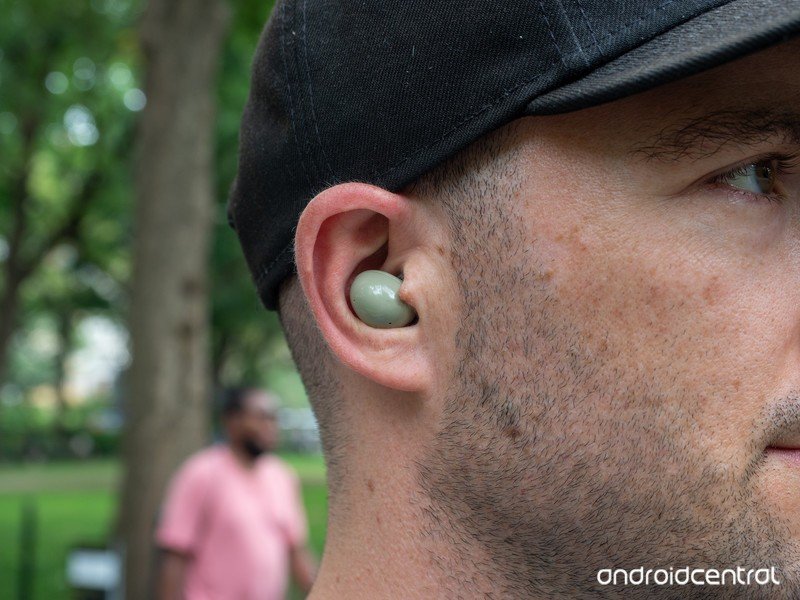 Both have their own voice assistants, and each have their share of issues. Siri is a non-factor in Android devices, whereas Bixby is arguably a non-factor with everything. Unlike Apple, Samsung doesn’t paint you into a functional corner by forcing you to choose Bixby. You can ignore it completely and go with Google Assistant. You can use Google Assistant with the AirPods using workarounds, but it’s not a native integration and requires some compromises to get it to work.

That can be a problem if you simply want the assistant to wake up and do something on command. The Galaxy Buds 2 hold an inherent advantage that way because they can do that with any Android device (and even iOS ones, too). You don’t need a Samsung phone to make that work.

Samsung Galaxy Buds 2 vs. Apple AirPods (2nd Gen) Getting on a call Samsung drastically improved call quality from past efforts with the previous Galaxy Buds+ and added further enhancements in the Buds Pro. The Buds 2 lie in the middle, with excellent call quality that falls shy of what Samsung’s flagship earbuds can do. For their part, the AirPods (2nd Gen) are very reliable for calls, thanks in part to the robust connection and solid microphones Apple equips them with. It’s just a lot easier to drown out more of the background with the Galaxy Buds 2.

The Buds 2 also have the ability to automatically switch between devices. You will need Samsung phones and tablets running on the company’s One UI 3.1 overlay on top of Android, but if that’s where you’re at, you are good to go. The integration enables you to watch or do something on a tablet and have the audio switch over to the call you just took on your Galaxy phone.

Samsung Galaxy Buds 2 vs. Apple AirPods (2nd Gen): Which one should you go with? 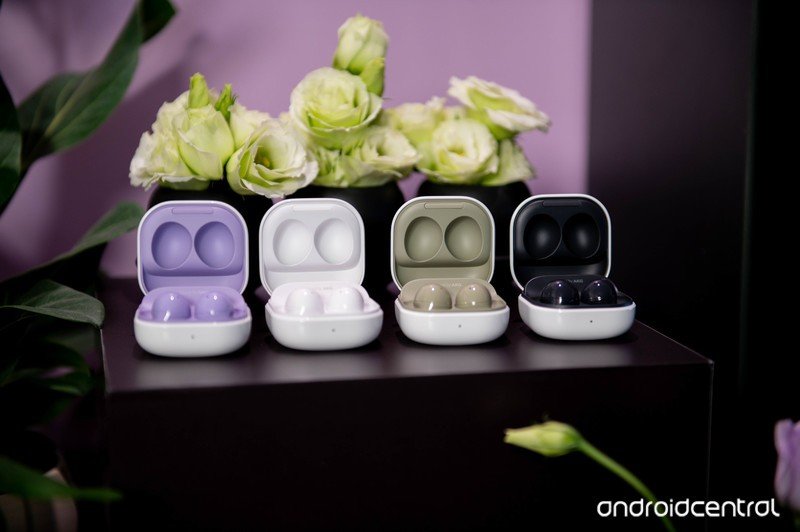 For Android users, regardless of whether it’s a Samsung-made Android device or not, the Galaxy Buds 2 simply offer more for the dollars you spend. Had the AirPods (2nd Gen) been considerably cheaper, they might make a case as alternatives, but in the same pricing ballpark, Apple’s earbuds just feel like they’ve fallen too far behind. One look at the best wireless earbuds currently available makes it clear how much the needle’s moved on that.

The Galaxy Buds 2 are super comfortable, play good sound, offer more tweaks in the app, and come at a good price. Then there are the color options. They make for a better experience all around and easily win this duel between rivals.

Samsung takes its latest entry-level true wireless earbuds up a notch by focusing on a solid combo of performance and comfort. 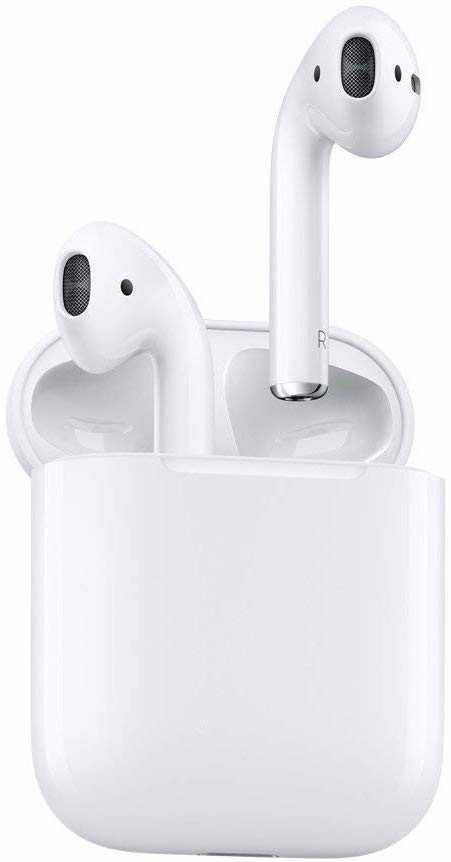 Everyone recognizes the AirPods, and while sometimes convenient, they aren’t the best when you want good sound or are on Android.