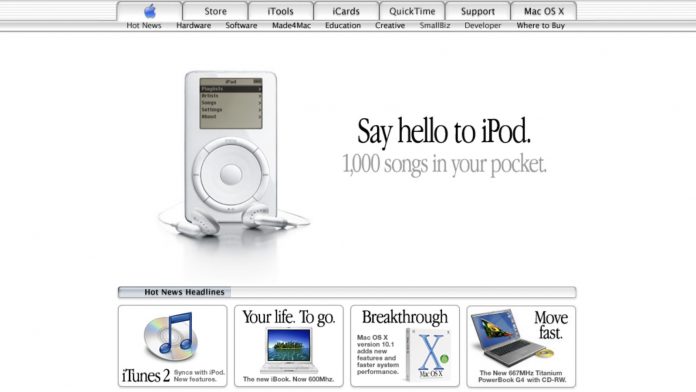 In what has become one of the most defining moments in Apple’s history, today marks the 20th anniversary of Steve Jobs introducing the original iPod at a small press event at the Town Hall auditorium at Apple’s former Infinite Loop headquarters.

Above is a snapshot of what Apple’s website looked like on October 23, 2001, the day the iPod was announced, courtesy of the Wayback Machine.

Our news story covering the original iPod’s announcement is still live on our website, and the comment section on the story is well known for containing several negative comments about the device. One commenter described the iPod as “far from revolutionary” and another commenter wrote “all this hype for something so ridiculous!”

Of course, the iPod turned out to be one of the most important products in Apple’s history and, along with the original iMac, helped the company become successful again after it flirted with bankruptcy in the late 1990s.

Jobs famously pitched the iPod as offering “1,000 songs in your pocket,” and he unveiled the device by pulling it out of his own pocket.

“With iPod, Apple has invented a whole new category of digital music player that lets you put your entire music collection in your pocket and listen to it wherever you go,” said Jobs in a press release. “With iPod, listening to music will never be the same again.”