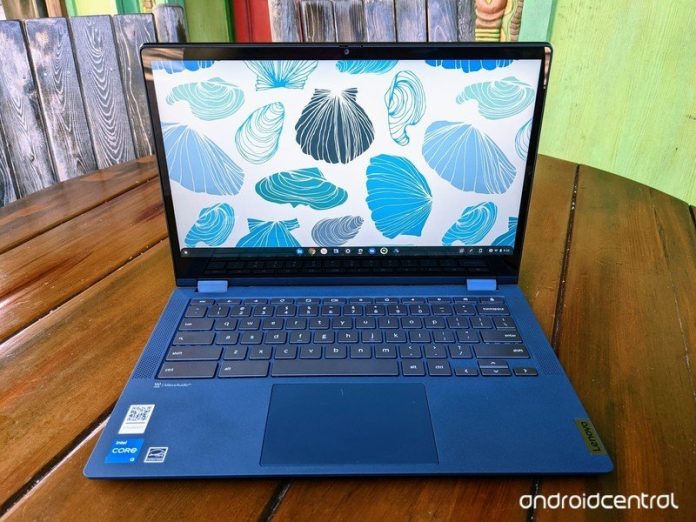 The Flex 5i is a dark mirror reflection without the homicidal tendencies. 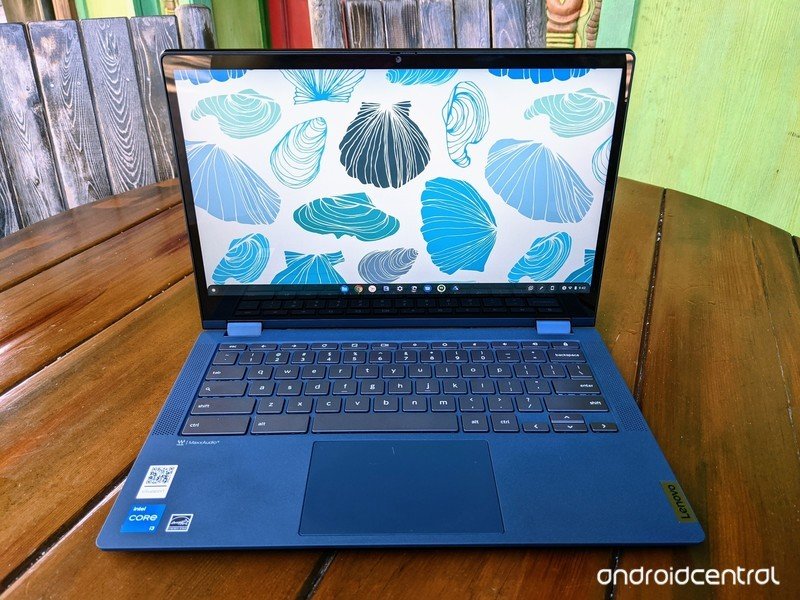 This year we’ve seen a few iterations of the Flex 5 hit the market — and we’re still waiting for one more to arrive — but the one that I was absolutely positive would rule 2021 (and 2022) was its direct successor: the Lenovo Chromebook Flex 5i. It brought new processors, higher storage configurations, and the Abyss Blue color that I absolutely fell in love with on the ThinkPad C13. It seemed like the minor upgrade to turn greatness into perfection. 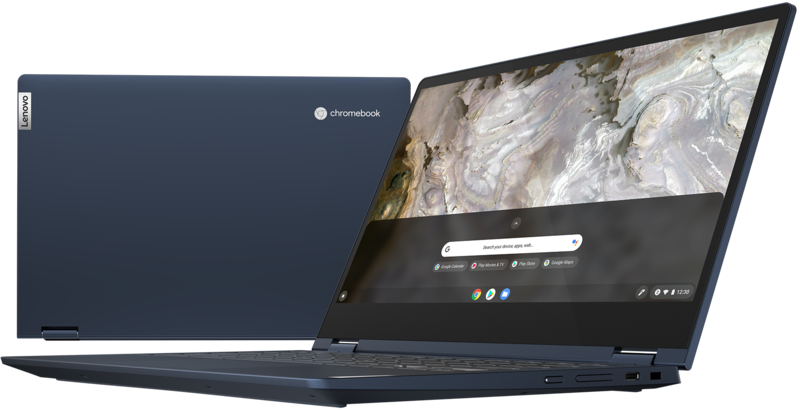 Bottom line: Lenovo doesn’t like to mess with a good thing, so not much has changed from last year’s Flex 5. We’ve got a faster processor, a fun new color, and the same excellent performance. It’s an iterative update, but that’s all it needs to remain competitive. 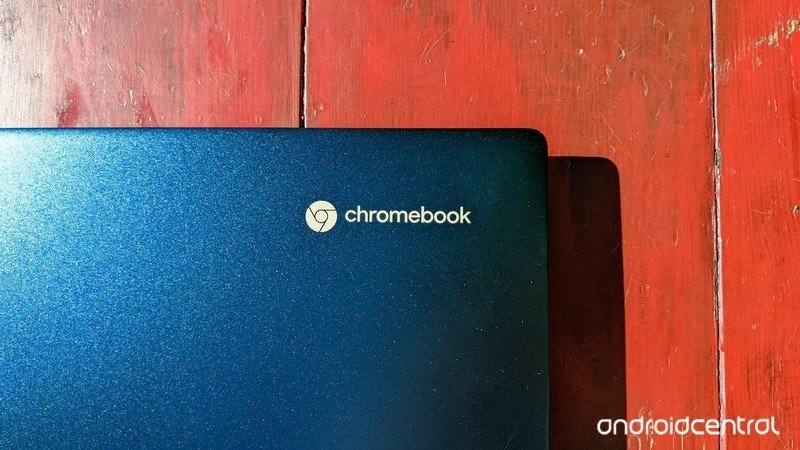 Lenovo announced the Flex 5i in late June 2021 alongside its clamshell cousin, the Lenovo 5i Chromebook. They were supposed to go on sale in July but didn’t start to appear at retailers until September. Even now, the Flex 5i is only available at a handful of retailers, each with its own configuration.

Best Buy currently only sells the Pentium version of the Flex 5i, and Lenovo’s website has the i3 model with 4GB of RAM and 64GB of storage. If you want 8GB of RAM — and if you want this laptop to be usable from now until its June 2029 Auto Update Expiration date (AUE), you definitely do — you’ll have to scope out your local Costco or hit up third-party vendors through marketplaces like Newegg. Walmart and Amazon both only sell the Flex 5, not the Flex 5i, at the time of this review.

Lenovo Chromebook Flex 5i The best gets better 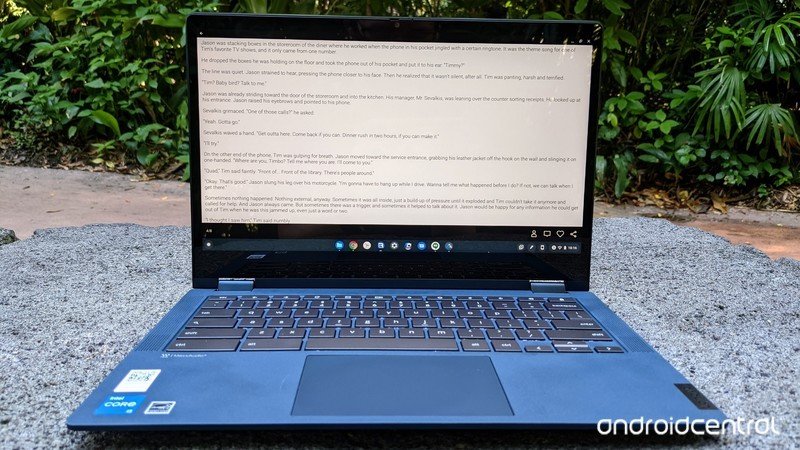 Oh, this blue is just darling when you catch it in the light. It’s an understated blue, but when the lid is closed under overhead lighting or in that super-sunny glass-walled airport terminal, it will light up like the Atlantic ocean at dawn. The grey keyboard inside plays nicely with the blue to help keys stand out without clashing with the overall look. If you played with the Flex 5 last year, nothing has changed in regard to ports: USB-C on each side with USB-A, microSD, and audio combo jack on the left. The buttons and Kensington lock port are on the right side.

Lenovo kept the same weight and dimensions as last year’s Flex 5, as well as the same connectivity, up-facing speakers, and general performance. It upgrades from 10th Gen Intel processors to 11th Gen Intel processors, but honestly, you’ll barely tell the difference in your day-to-day use of Chrome OS. Unless you spend lots of time in Linux or you’re an absolute tab-hoarder like my dad, who keeps over a hundred tabs open on a regular basis, both the 10th Gen Intel Core i3 and 11th Gen are capable processors, especially given that Chrome OS is written to run on more modest hardware.

The keyboard is evenly backlit, comfortable to type on for long periods of time, and it has a good spring to the keys. While it can feel slightly mushy to those of you who’ve been spoiled by mechanical keyboards while working at home (like me), I’ve spent weeks typing on mine and find it quite comfortable. The trackpad sitting under it is fairly smooth, and the palm rests have the perfect texture, with just the right amount of grain and resistance. 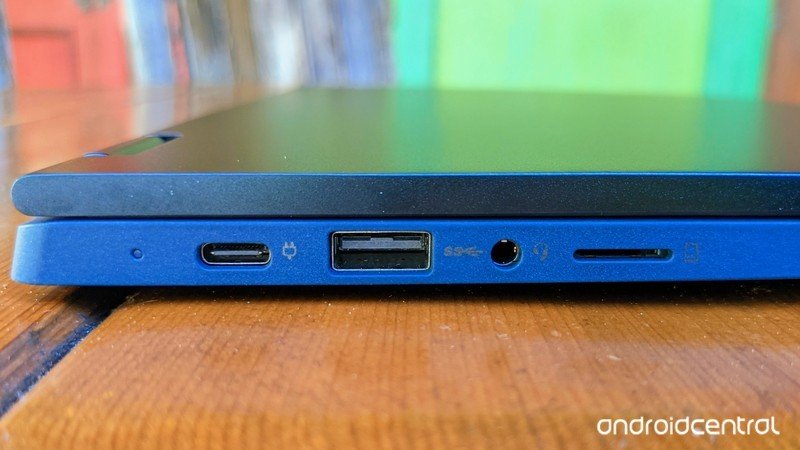 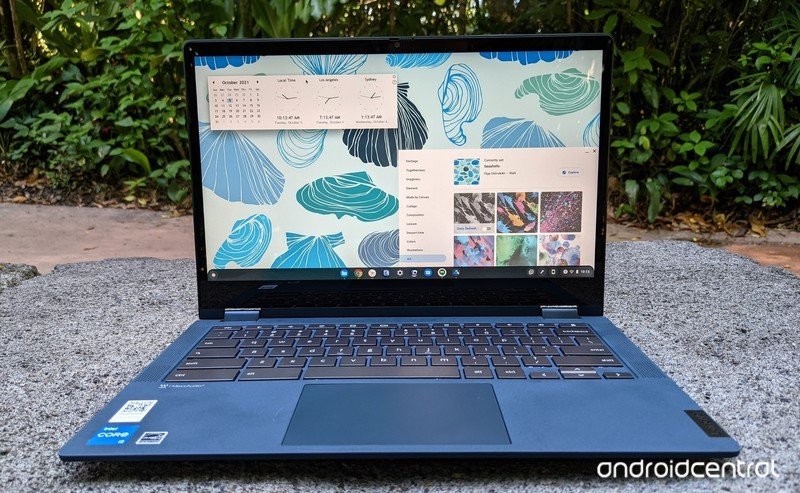 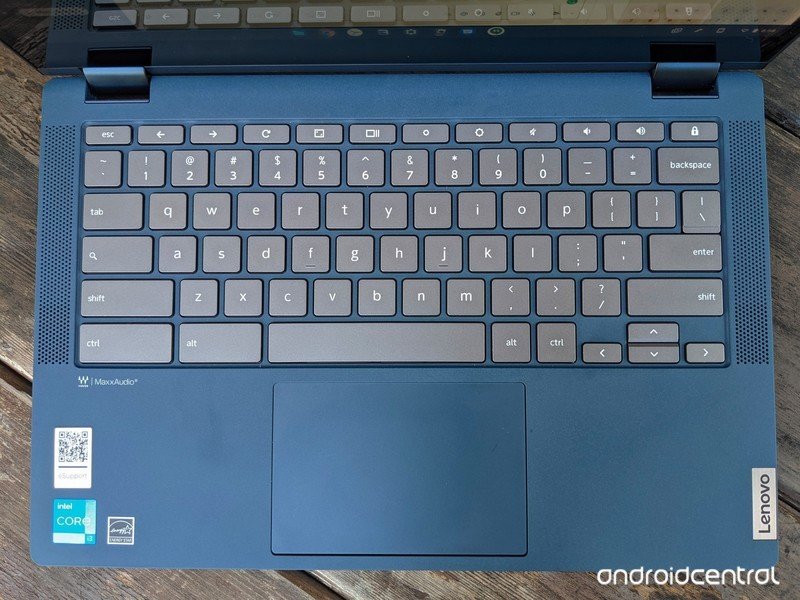 During day-to-day use, the Flex 5i has been great for sitting at my desk and banging out three thousand words in a day, and it’s been good for curling up on the couch and playing Freecell long into the night on weekends. My review unit had 8GB of RAM with the i3 processor, so it handled 20-30 tabs just fine. Like the Flex 5 before it, the webcam is okay for Google Meet or Zoom, but it’s not high-quality.

Lenovo Chromebook Flex 5i The best gets bland Lenovo had to sacrifice something to bring more powerful processors to the Flex 5i while still maintaining the same size and weight. In this case, it ended up being battery life. While I consistently got 9-10 hours on a single charge with the Flex 5, the Flex 5i usually begs for a top-off around 7-8 hours.

Considering most people do most of their work at or near a desk with a charger, Lenovo thought that trade-off was acceptable. However, I spend most of my work time with my laptop either in my lap or on my fancy new lift-top coffee table, so the difference was almost instantly apparent to me. If you tend to have long days away from a charger, the Flex 5i won’t be as good a fit as its predecessor. 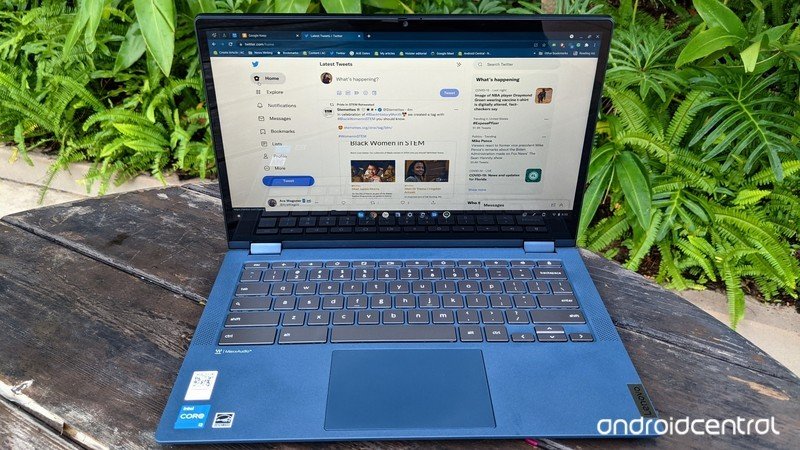 The screen here is the same as the last couple of years: a 13.3-inch, 1920×1080 pixel, 250 nits glossy IPS touchscreen. That was perfectly fine last year, but if Lenovo was going to give us an upgraded processor, I wish they could’ve given us a brighter screen. Even a bump to 300 or 350 nits would’ve made it easier to use in brighter offices or outdoors. The 13-14-inch segment is getting more and more crowded, and since most of their screens are only 220-250 nits, that allows higher-brightness screens like the Acer Spin 713 to stand out all the more.

My screen, in particular, had a bit of light bleed in the upper left corner, but Lenovo said it was within tolerance. If you’re concerned about light bleed, after your initial setup, go to Google Photos, click on any of your backed-up screenshots, and then hit the fullscreen key. That’ll be pure black on all four corners and both of the sides, where light bleed is more common. 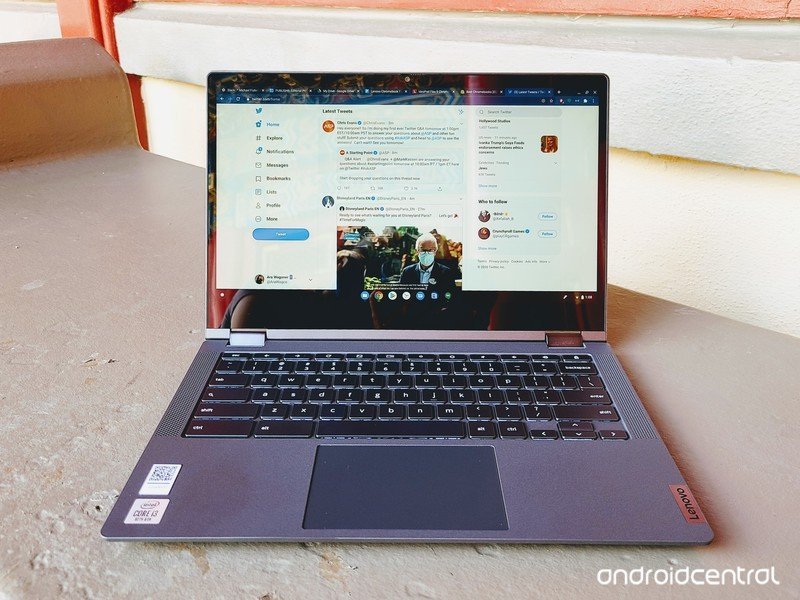 The biggest argument against the Flex 5i is that its predecessor is getting discounted left and right. The i3/4GB/64GB dropped down to $300 this week, and the usual price bounces in the range of $330-$375. That’s a much better deal than the $540 that the Flex 5i is running right now, and the Flex 5i is still not widely available now outside the Pentium model available at Best Buy (which is absolutely not worth its typical $420 price tag).

If you’re looking for a workhorse computer that has more RAM or more storage, you’ll want to take a look at the Acer Spin 713. The screen sports a 3:2 aspect ratio — which some people swear is better for working on — and it’s 400 nits so that you can use it outdoors (just not in direct sunshine). The Spin 713 has an 11th-gen i5 processor, double the RAM, and quadruple the SSD storage, but it is more expensive.

Want that Lenovo style but a brighter screen? The Lenovo Chromebook Duet 5 is coming out any day now, and it will have a 400-nit 13.3-inch 1080p screen. It will also be a Chrome OS tablet, with the keyboard and kickstand in the box, so you’ll be able to ditch the keyboard when you’re one with work and want to watch Netflix in bed. It won’t be quite as powerful with the Snapdragon 7c Gen 2 compute platform, but it’ll be better than the Pentium Flex 5i and since it’ll be a tablet, it won’t be quite as good for using in your lap.

Lenovo Chromebook Flex 5i Should you buy it? Little changes can elevate a good product to a great one, but the Lenovo Chromebook Flex 5i’s changes are minor, and so is the payoff for it. The result is a solid Chromebook that looks good on its own but is stuck in the shadow of its big brother. I like the Flex 5i, but I still love the Flex 5 more.

Especially with the higher pricing on the Flex 5i’s Intel Core models compared to the 2020 model and the impending release of the Duet 5, the Lenovo Chromebook Flex 5i is facing stiff competition on all sides. The Chromebook itself is solid, but it needs more help if it wants to stand out.

The next best thing

A worthy replacement for 2021’s most popular Chromebook

The Flex 5i brings more power and style to a winning Chromebook, and while more power means slightly lower battery life, it’ll still get you through the workday.