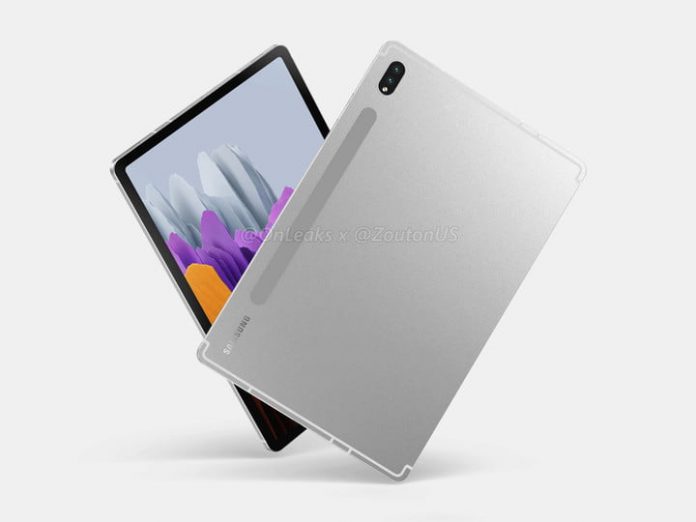 Despite Android’s lackluster reputation in the tablet market, Samsung has worked hard to build up a respectable slate of tablets. These include both the Galaxy Tab S7 and Galaxy Tab S7 FE in recent times. With high-resolution displays, stylus support, and clean design, these tablets manage to match and rival the iPad on a pure hardware basis, though the available app library and screen optimization ned work.

The new renders show off a very sleek-looking tablet in silver. There’s a dual camera on the rear, like with the Tab S7, and the front has very slim bezels. There’s also a slot for attaching the S Pen, useful for those who are artists or note-takers.

Specs-wise, the tablet is said to have an 11-inch 2K display complete with a 120HZ refresh rate. It’ll be powered by the Snapdragon 888 chip, with the RAM starting at around 8GB and going up to 12GB RAM for the Galaxy Tab S8 Plus. These specs come from a relatively unknown YouTube source, the Galox, so don’t necessarily take it at face value.

The Galaxy Tab S8 was supposed to launch in 2021, but the chip shortage hitting the entire market is affecting it as well, and the latest rumor is that the slate has been pushed back to 2022. If Samsung does end up launching the S8 Tab in early 2022, it will find itself in good company, with the S21 (FE), and the S22 also expected at the same time. Samsung may very well end up with a stronger lineup than it originally planned.

Facebook
Twitter
Pinterest
WhatsApp
Previous articleHP is having an early Black Friday sale today — here are the best deals
Next articleApple Watch Series 7 Review: The best smartwatch you can buy, by far
- Advertisment -