HomeNews"Hey Disney" is cute, but not cute enough to overlook privacy problems
News 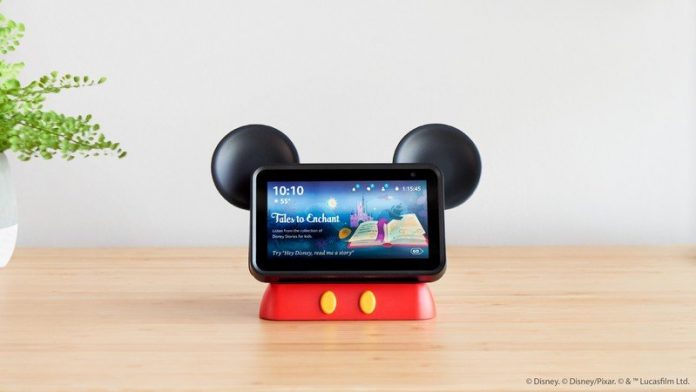 Hey Disney can’t do as much as Alexa — but it can still listen to your family. 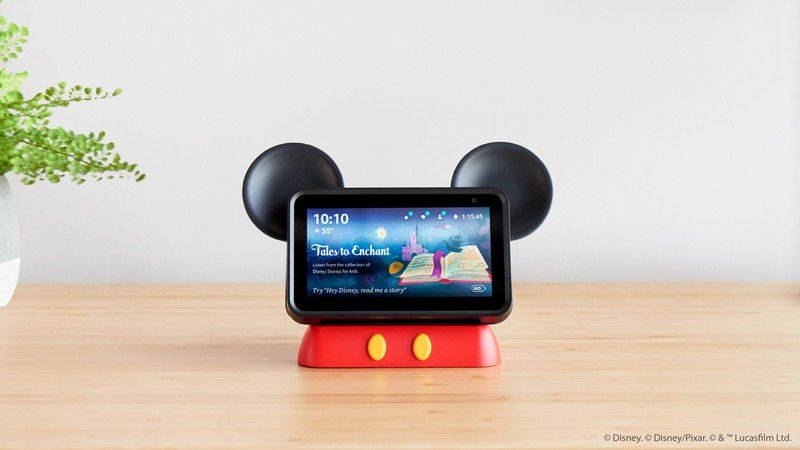 When the new partnership to put Amazon Echo Show 5s into Walt Disney World hotel rooms with a Disney-fied, Alexa-backed assistant called Hey Disney was announced, the Disney nerd in me had two questions:

“What the heck took them so long?” and “Who had the brilliant idea to stick a camera and microphone in every Walt Disney World hotel room?”

The first question requires a complicated conversation. It would take time to build custom AIs with uniquely-spoken character voices, find feasible monetization methods, and optimize it to a level of quality worthy of the Disney name. Even more time was undoubtedly spent tying this service into Disney’s theme park services with Alexa for Hospitality, so you can ask Alexa for extra pillows or fresh towels instead of having to ring the front desk.

An answer to the latter question, on the other hand, is much easier to guess: Amazon wants to get you used to always-listening devices being in more and more locations. And Disney almost certainly wants to see the usage statistics from how Hey Disney is used to anticipate guest needs and character popularity better. 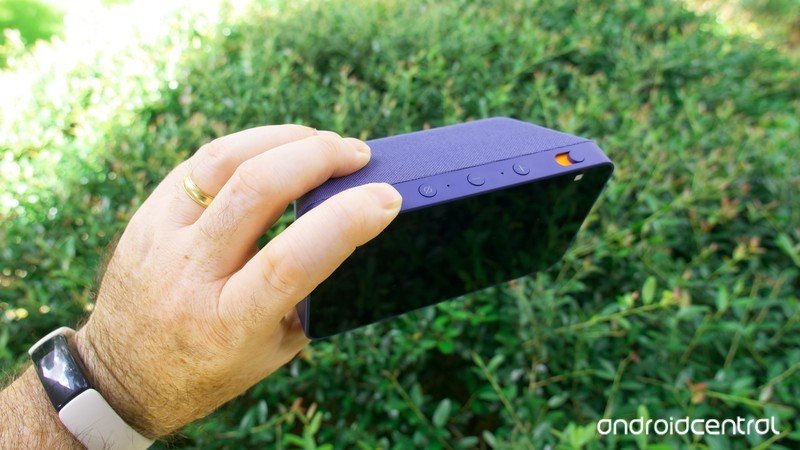 Before we get our tin-foil hats on, let’s start with the most important part of this whole Alexa/Amazon in every single Disney hotel room snafu:

Yes, you can (and should) disable the mic and camera in the Alexa Show 5 that will be in your hotel room. The switch is on top of the upper right corner of the screen. Before Hey Disney activates on the Echo Show 5 your family will be using, you’ll have to grant it permissions, as your kids will be using it as much as (if not more than) you. 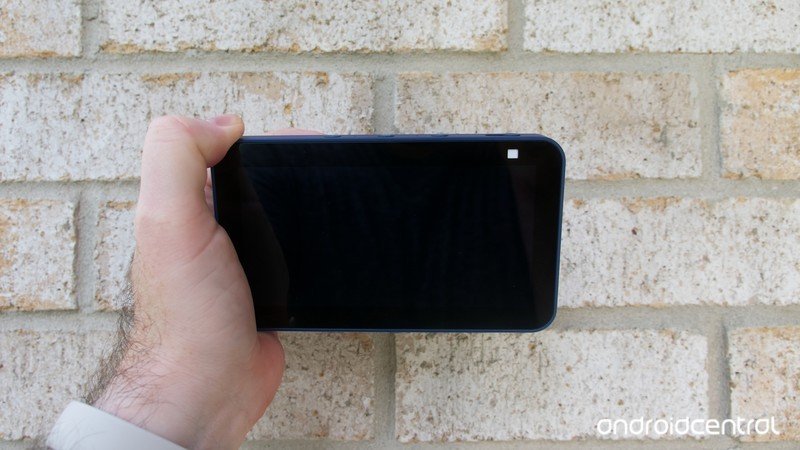 Being able to disable this or turn the device off entirely — it’s unlikely the Echo’s wall adapter will be caged or screwed in, so you can always unplug it — does not excuse putting a smart display that many guests will be unfamiliar within thousands upon thousands of hotel rooms. Especially when it’s aimed at kids, as most hotels that currently use Alexa speakers or displays in their rooms are targeted towards adults.

I love Disney. I live at Walt Disney World, and I’m willing to forgive a lot of the rampant greed on display at Disney Parks right now — but the instant I heard the announcement, warning klaxons went off in my head. Yes, yes, Disney can already spy on you through the My Disney Experience app — along with every other Disney service you use, including ESPN — but there’s a distinct difference between my phone listening to me when I say “Hey Disney” and having a smart display that I don’t own and can only partially control listening to and interacting with me and my family. 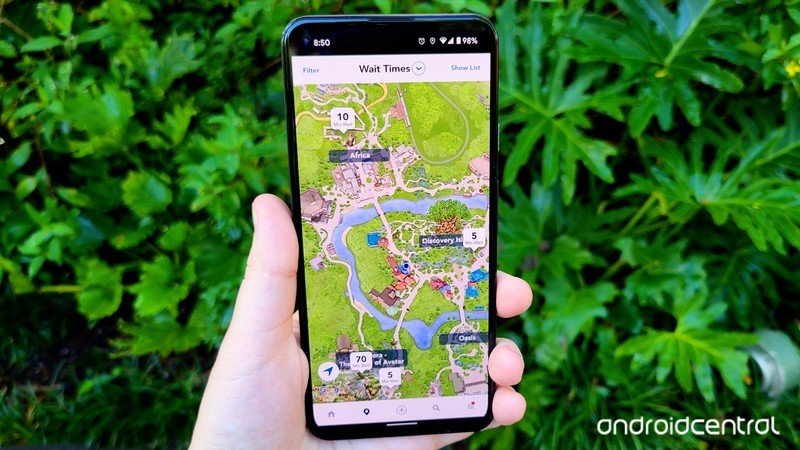 As a sidenote, here’s another fun Disney privacy tidbit: thanks to Android 12’s clipboard permissions, I can see the My Disney Experience app paste whatever my last copied link, text, or password was into the app without ever turning on the keyboard every time I open it. That’s kind of sketchy, Disney, especially when you already pull location data and god knows what else through the app and MagicBand tracking.

There are upsides of the Echo Show 5 in your hotel room: you could get Ring or Blink camera alerts through the display to see who came to the front gate while you were on vacation. That hasn’t taken any extra setup, by the way; whenever my dad comes to visit, my Echo Dot chimes with motion alerts from his Ring camera three states away, even without him ever touching or talking to my Dot. 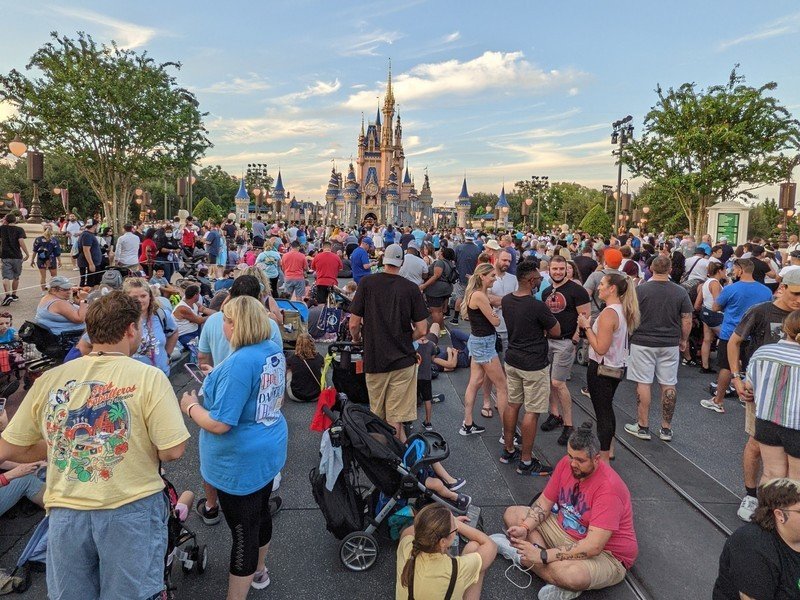 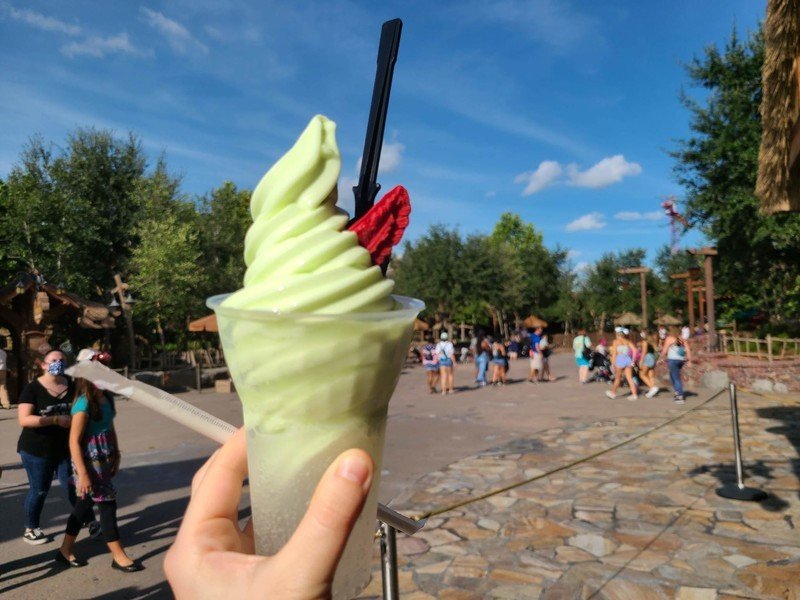 Want to avoid these crowds? Use Hey Disney.

You can also use the display to get useful information like what time the park opens today — so that you can go take advantage of Early Entry — or hearing what the day’s weather will bring, or even where to buy a Turkey Leg or a Dole Whip. (Key Lime at Storybook Treats is the best one, just FYI.) This means less you’ll need to look up through various apps and the quicker you can get up, prepped, and out the door to theme parks and the unhealthy breakfast of champions!

Is that convenience worth all the headaches that will come with this? The in-room Echo Shows will be owned and managed by Disney, which can complicate device management. This could cause your recordings to be deleted after a vacation or previous room guests to accidentally trigger the Show once after they’ve gone home.

As I’ve mentioned, my dad’s Ring account synced up with my Echo Dot just from being on the same Wi-Fi, and Disney uses a massive mesh system across its resorts. What if your Ring alerts go to the Echo Show in the wrong room? And this is setting aside the information Disney and Amazon will be able to collect once you opt-in. 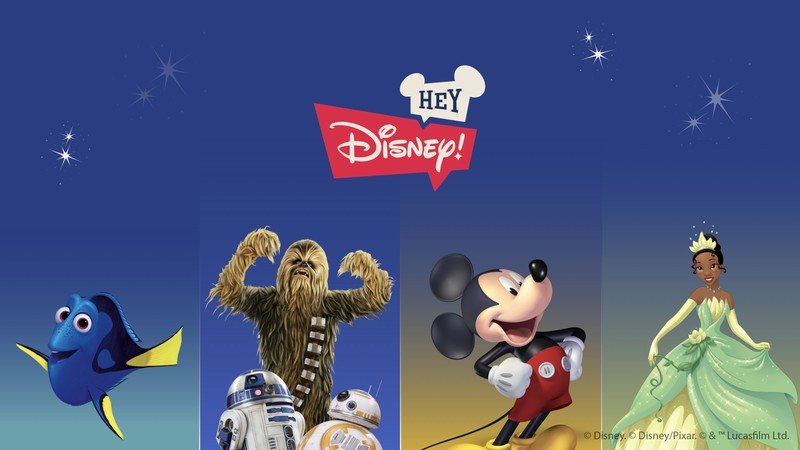 You’ll also be able to use Hey Disney at home as a paid custom AI on top of Alexa, but the AI is limited in what it can do. This is less of an Alexa replacement and more of a souped-up Alexa Skill. And while it could be fun for those with small kids and plenty of Echo devices around the house, pricing will likely be higher than the service is worth unless you live at Walt Disney World and can ask it about the parks regularly.

Hey Disney won’t be available until 2022 — though you can sign up for notifications right now — and it won’t be appearing in hotel rooms until next year, too. There’s time for Amazon and Disney to iron out the details and make what it does and doesn’t collect crystal clear.

For now, though, the only useful announcement yesterday was the cute Mickey stand from OtterBox, which will be handy for owners of the best budget-friendly smart speaker.