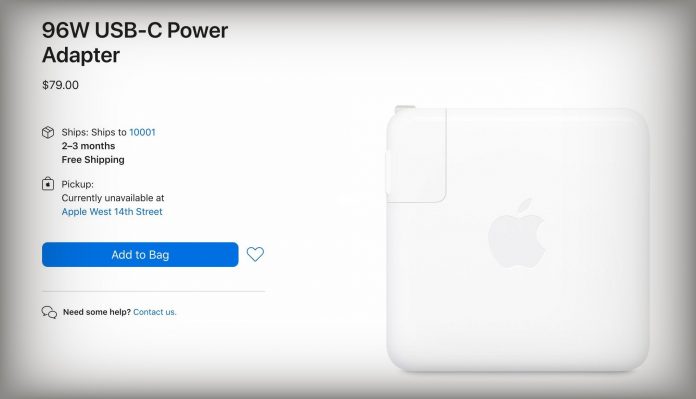 Apple’s 96W USB-C power adapter that is designed for use with the 16-inch MacBook Pro currently faces a lengthy 2-3 months shipping estimate on the company’s online store in the United States and many other countries. The adapter is also listed as unavailable for in-store pickup at most Apple retail stores around the world.

In some countries like Japan, the 2-3 months shipping estimate began showing up in August, and the delay has since extended to more countries.

While redesigned 14-inch and 16-inch MacBook Pro models are rumored to launch later this year, many tech companies are facing supply constraints due to a global chip shortage, so the reason for the 96W power adapter’s shipping delay is ultimately unclear.

Apple’s smaller 20W, 30W, and 61W power adapters are currently not facing any extended shipping delays in the United States.

A source at an Apple Authorized Reseller informed MacRumors that their distributors currently do not have any stock of the 96W power adapter, suggesting that the power adapter is facing significant supply constraints across multiple channels.