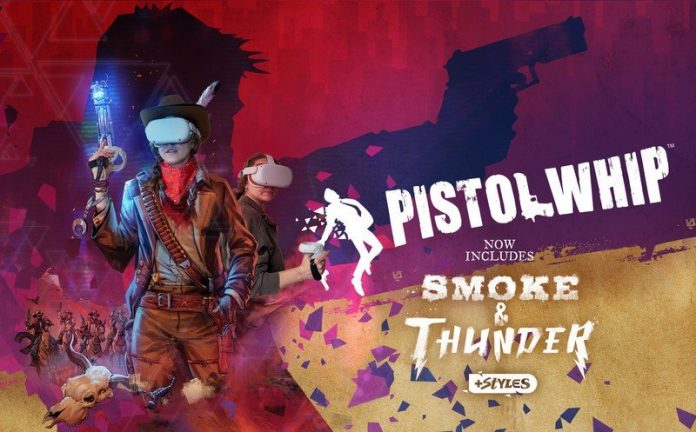 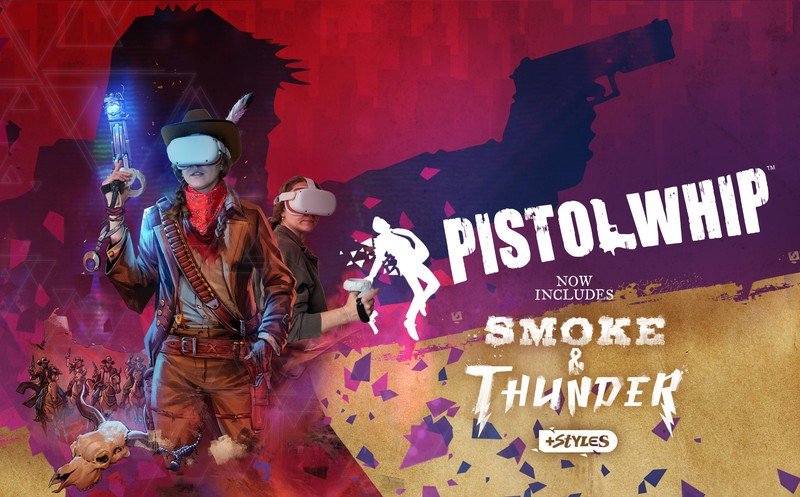 Pistol Whip: Smoke & Thunder marks the second cinematic campaign released in the game’s nearly two-year history. It’s the culmination of everything that developer Cloudhead Games has been working toward since the rhythm shooter debuted and the most complete version of the game we’ve seen to date. Smoke & Thunder debuts a brand new five-scene campaign with a Wild West theme, bringing the total number of scenes to 28.

Unlike other rhythm games where songs are the main distinction between experiences, Pistol Whip’s scenes are more like proper levels in a classic shooter. They only take a few minutes to complete and bring the player on a linear trajectory from start to finish. Each level has its own theme, color scheme, enemies, and even sometimes weapons, but all of them have one thing in common: the visuals around you are synced to the music playing.

Earlier this year, we saw the first “cinematic release” for Pistol Whip debut with Pistol Whip: 2089. 2089, as you might assume from the name, touted a dystopian futuristic theme complete with killer robots, alien worlds, and electronic weaponry from another time. Smoke & Thunder is a sort of the antithesis of 2089. The Wild West theme alone is massively different, and there’s far more customization this time around thanks to the new Styles addition. It’s also totally free, just like all the other Pistol Whip updates, which is just part of what makes it one of the very best Quest 2 games. 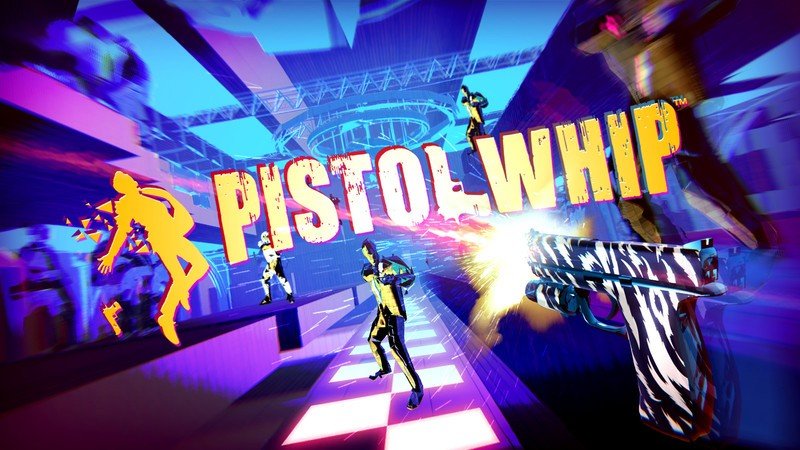 Bottom line: The latest free update to Pistol Whip brings us to the Wild West and introduces new weapons, new enemies, and a new customization system that’s been sorely needed since the beginning. Each new custom mode creates a new online leaderboard, further expanding the concept of competition in a surprising and exciting new way. It’s just a shame the new campaign is so short. 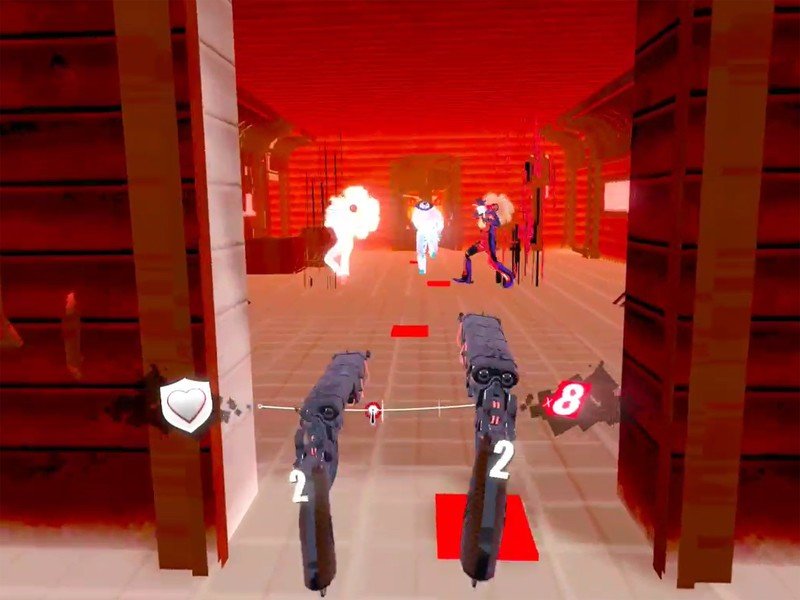 Pistol Whip has been the rhythm shooter to beat since its debut in late 2019 and is available on all major VR platforms. Smoke & Thunder is yet another free update for all platforms, but it comes at a $5 increase in the base price of the game for all new players. Still, at $30, you’re effectively paying $1 per scene — for 28 in total — and that’s not even counting all the replayability you’ll get with the new Styles feature.

Smoke & Thunder’s campaign is quite short but feels a lot more personable than Pistol Whip: 2089.

While Smoke & Thunder’s campaign is quite short, I found the story feels a lot more personable than 2089. The story revolves around one woman’s attempt to bring her sister back from the brink of transforming into the worst criminal the West has ever seen and is told in short bursts between scenes.

As in 2089, players will see their weapons evolve from the simple dual revolvers in the beginning of the game into lighting-shooting boomsticks by the end. These are purpose-built guns that fit well with the theme and the new gameplay elements introduced throughout the story.

I particularly loved how much emphasis is placed on dual-wielding pistols in this expansion. Originally, Pistol Whip only allowed players to use a single gun for those first few campaigns, later adding in the option to use two pistols with a slight score penalty. Even after this penalty was removed in one of the updates, dual-wielding didn’t feel like a natural addition of the game — that is, until Smoke & Thunder came along.

Dual-wielding finally feels natural in a game that used to discourage it.

You’ll regularly find yourself shooting from the hip as you might envision a sheriff from the Wild West might do. In fact, this type of gunplay is advantageous to players in later campaigns, as the boomsticks only have two shots apiece before needing to be reloaded.

While the full campaign can be blown through in less than an hour on easy or normal modes, hard mode introduces a challenge that was missing in the 2089 campaign. In fact, these are the hardest hard levels I can recall playing in the game, which is saying something given the challenges that players will need to overcome in many of the game’s scenes.

Pistol Whip has famously caused sore legs since its initial release due to the requirement to move your body around in order to dodge bullets Keanu Reaves-style. The new styles functionality brings this to a new level, introducing several new modifiers that often make the game even more challenging than it was before.

One style, called Brawler, disables the bullet-shooting functionality from your guns, forcing you to weave and duck while mercilessly pounding any enemy that steps in your way. It’s an unbelievable workout, to say the least. 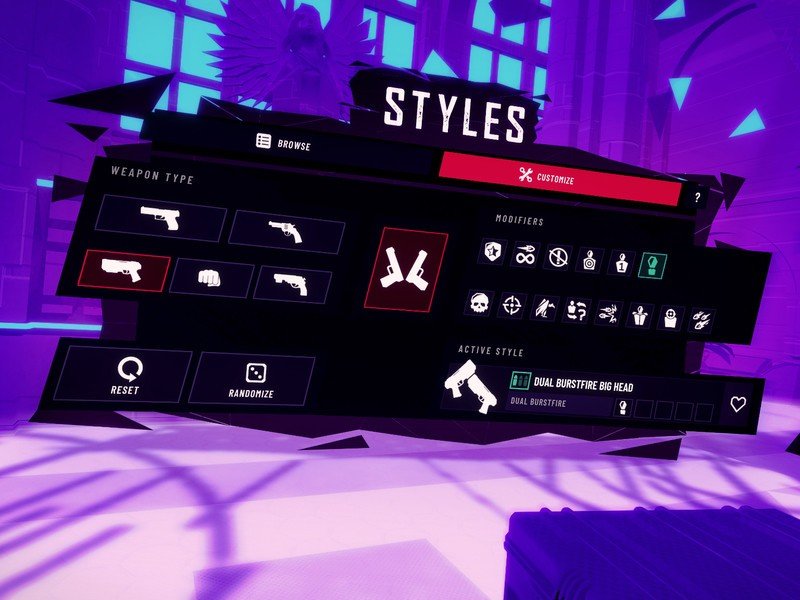 At this point, the list of negatives looks more like a wishlist for future updates rather than things the team needs to fix or change. As an arcade-style game, Pistol Whip revolves around relatively short gameplay sessions that don’t always play well with a storyline. Just like 2089, Smoke & Thunder is an incredibly short campaign with a shallow story. It’s used more as a way to piece scenes together than anything, although the story itself is a lot more cohesive and personal feeling than 2089’s campaign was.

Pistol Whip is still very much a high score leaderboard-style game. If that’s not your thing, the experience will be short-lived.

Normal mode is as easy as I would have expected, being a veteran Pistol Whip player, and you’ll likely breeze through the five new campaign missions in no time flat. Just like 2089, I finished it in one sitting (or, rather, standing). The draw here doesn’t come with the story itself though; it’s all in the replayability. If you’ve come here for some robust story that’ll deliver hours of witty dialog, you’ve come to the wrong place.

Conversely, folks who love real-time multiplayer with friends will be disappointed. Pistol Whip has always revolved around arcade-like leaderboards to keep players coming back regularly, and Smoke & Thunder only further solidifies that gameplay design. With the new Styles modifiers, new leaderboards are created every time you make a new style for a campaign, meaning you could find yourself at the top of dozens of leaderboards. If you’re more about shooting other players in real-time, something like Population: One will be a better choice.

While some rhythm games support custom songs — either officially or via mods — such functionality doesn’t make much sense for Pistol Whip because the game doesn’t revolve around using songs. Instead, Pistol Whip is all about level design with an accompanying song. That’s why developer Cloudhead Games refers to them as scenes rather than songs. There are ways to mod custom songs into the game but it’s pretty obvious that it wasn’t intended for this functionality. Maybe in a future update.

Pistol Whip: Smoke & Thunder: Should you play it? 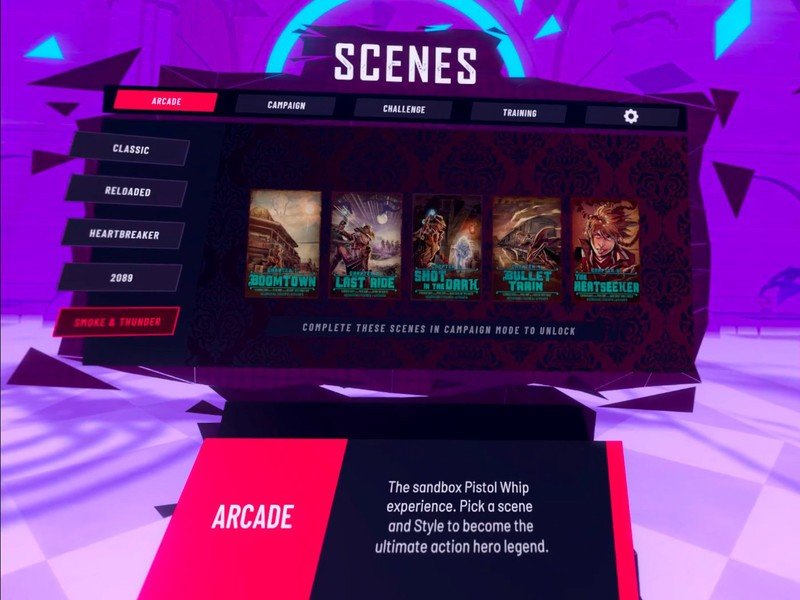 Pistol Whip was already a near-perfect experience to begin with. It’s one of those games that immediately makes sense in VR and nowhere else. It’s easy to jump in and play, yet challenging to master. While the new campaign is incredibly fun, like 2089’s campaign, it’s also very short-lived.

Thankfully, the new Styles mechanic ensures that players who want more out of the game will get it seemingly forever thanks to the ability to randomize or mix and match styles. In addition to that, every time a new style combination is made, a new online leaderboard is created, giving you the ability to place high on dozens of leaderboards at once. That’s some incredible replay value that’ll keep you coming back every day, making this one amazing way to simultaneously have a ton of fun and get a great workout.

Bottom line: Pistol Whip is the defining rhythm shooter in VR. This new free Wild West expansion isn’t just about a fun new campaign, though, it adds deep customization and plenty of new scenes and gameplay types to keep things going for months.