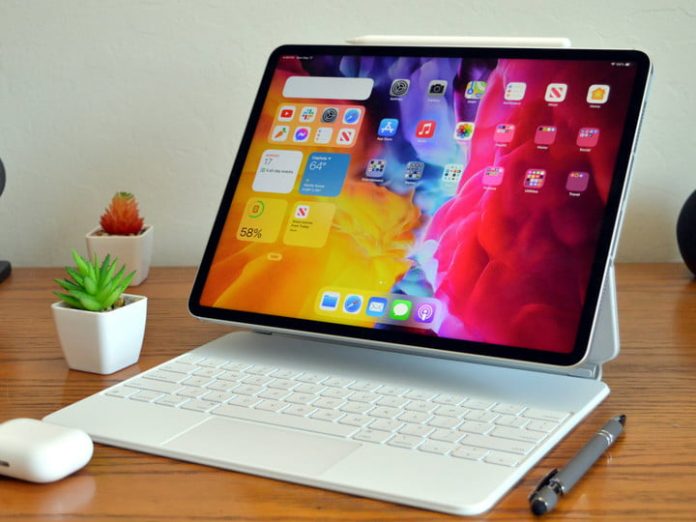 Tablets have come a long way in the past few years, and now they are legitimate laptop alternatives. Tablets like the iPad Pro are lightweight and versatile devices perfect for students, designers, and professionals alike. Starting at $750, it’s definitely on the top end for students, but it can last them for many years.

Yet there’s another device starting at $750 that’s ideal for students and professionals alike: Microsoft’s Surface Pro 7. It’s not quite the dedicated tablet that is the iPad Pro, but has the benefit of a full desktop operating system. Which device is best for most people? Let’s break it down.

For more on the iPad Pro, check out how it stacks up against the M1 MacBook Pro and last year’s iPad Pro.

While both of these devices are designed to be 2-in-1 devices — complete with detachable keyboards — it’s pretty obvious just by looking at which one is the more modern device.

The Surface Pro 7 is the older model, and it is really beginning to show its age. The chassis of the Surface Pro lineup hasn’t changed at all since the product’s 5th generation. It’s hefty at 1.7 pounds, compared to 1.03 pounds for the 11-inch iPad Pro. The 12.9-inch iPad Pro is more comparable but also gives you noticeably more screen real estate.

The bezels on the Surface Pro 7 are also chunky, making them a bit of an eyesore compared to modern devices. The iPad Pro also has bezels all around too, and a certain amount of bezel is understandable on tablets to prevent accidental inputs, but the ones on the Pro 7 are tough to look at.

The Pro 7 comes with a built-in kickstand, which instantly makes it more convenient to use than the iPad Pro, but that hardly makes up for the outdated design of the device.

The only thing that really stands out about the Surface Pro 7 is its 2,736 x 1,824 display. Compared to the 11-inch iPad Pro’s 2,388 x 1,668 Liquid Retina display, the Pro 7 still holds its own. It’s a lovely screen that has aged far better than the rest of the device. It doesn’t stand up to the 12.9-inch iPad Pro’s mini-LED Liquid Retina XDR display, but that comes at a substantial markup.

There is one benefit to the Surface Pro 7’s older design, and that’s the more robust I/O. It isn’t mind-boggling by any means since the ports only consist of a USB-C port, a USB-A, and a headphone jack along with the magnetic connector. That doesn’t seem like much, but compared to the iPad Pro’s measly single Thunderbolt port, it’s leaps and bounds ahead. The USB-A port makes it easy to connect an external keyboard or wired mouse, and the headphone jack still comes in handy for video editors and sound engineers. The new iPad Pros have a leg up by adding Thunderbolt this generation, but a dongle is all but necessary for both of them.

These two tablets also diverge significantly with their operating systems. The iPad Pros run iPadOS, a fork of iOS explicitly built for the iPad. While the iPad Pro is fully capable of outpacing regular laptops (more on that later), it is limited by the capacity of the mobile operating system. There are potent apps like ProCreate and LumaFusion that take advantage of the iPad Pro’s M1 chip, but thus far, the iPad Pro’s beefy hardware is underutilized. Some day, iPad users may see a mobile version of Logic Pro or Final Cut, but those seem to be far-off fantasies at the moment.

The Surface Pro 7, however, is running a full version of Windows 10. That means owners get the full benefits of a desktop OS in a tablet form factor. You can download any 32-bit or 64-bit apps from the web without relying on the App Store (another limitation of the iPad).

As for all the other features, they are sold separately for each device. That’s a downside for both since you have to further add to the cost to get the most out of them. The iPad Pro can be paired with the outstanding Magic Keyboard from Apple or something more affordable like the Logitech Combo Touch. Both use the iPad Pro’s smart connector pins to pair the keyboard to the iPad. That means you don’t have to rely on Bluetooth and you get a consistent and lag-free typing experience. Both keyboards also include a trackpad to replace touch gestures, and it supports swipe gestures for simple navigation. The iPad Pro is also compatible with the Apple Pencil, debatably the best tablet stylus on the market. The second-generation Pencil can charge via the magnetic connector on the top of the iPad, replacing the awkward port of the first generation Pencil and providing a convenient place to store it.

Like the iPad Pro, the Surface Pro sells its Type Cover separately from the device itself. The keyboard is very high quality, and the Alcantara fabric is comfortable to the touch and comes in various colors. The Surface Pen is also available, and it is also a stellar writing experience on the tablet. Perhaps most notably, Microsoft sells a full-fledged dock that connects to the Surface Pro 7. This dock lets the tablet connect to an external monitor and provides a plethora of ports to attach accessories. It’s the kind of no-brainer productivity device that makes you wonder why Apple hasn’t made its own yet.

If the design doesn’t indicate the Surface Pro 7’s age, its performance certainly will. You can get the Surface Pro 7 with either a 10th Gen Intel Core i3, i5, or i7 processor. When it was released two years ago, the Surface Pro 7 had impressive performance for its shape and size. However, it can hardly be compared to the M1 in the iPad Pro — especially the i3 in the base Pro 7 model.

The M1 is Apple’s in-house silicon, and it delivers performance that far outperforms Intel’s offering here despite being an ARM-based architecture. And since the M1 is basically a beefed-up mobile processor, it also crazy power efficient. That makes the iPad Pro more powerful with longer battery life. That’s a big deal, especially considering the Pro 7’s battery life was an issue when we reviewed it.

The iPad Pro does just about everything for most people. It lacks some creative tools for serious professionals, but for students and general business purposes, the iPad Pro can more than handle the tasks you throw at it. Where it lacks in pro apps, the iPad Pro makes up for with its modern design, portability, and the plethora of apps on the App Store.

While the Surface Pro 7 does have the benefit of a full Windows operating system, it’s probably best to wait for Microsoft to release the inevitable update, likely sometime this year.

The iPad Pro is also the wiser long-term investment because of its recent hardware refresh. If you want to see more on the iPad Pro, check out our comparison between it and the Surface Pro X — Microsoft’s ARM-based iPad alternative.