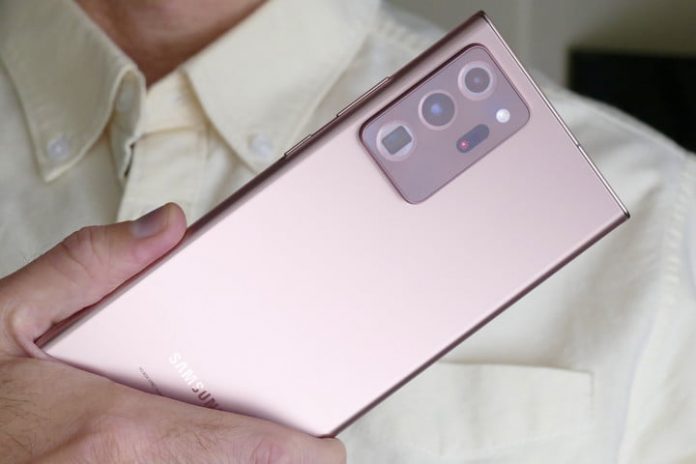 If Samsung doesn’t release a new Galaxy Note smartphone in 2021, which is looking highly likely, should you still consider buying the Galaxy Note 20 Ultra? Released at the end of August in 2020, the phone received our coveted Editor’s Choice award at the time but has since been largely passed by the excellent Galaxy S21 Ultra.

Should it be forgotten this way? I’ve been using the Galaxy Note 20 Ultra for a week and can confidently say it’s still an excellent smartphone in all but one, rather important, area. It’s a big deal, and along with the shadow of the S21 Ultra hanging over it, means not even the Note 20 Ultra’s many positive points can make it an absolute must-buy today, a shock when it’s barely a year into its life.

No longer too big?

Let’s go through what makes the Note 20 Ultra such a good smartphone first, and the list is long and extensive. It’s beautifully made, the finish has proven hardwearing, and the Mystic Bronze color is still really eye-catching. I like the squared-off, massive camera module design too. It has aged very well.

I remember that for the first few weeks of using the Note 20 Ultra in 2020, it took me a while to adjust to the overall size of the phone. I noted in my review how I missed a smaller, more manageably sized phone for quick tasks. The proliferation of phones with massive screens released since then has dulled the Note 20 Ultra’s size. This time around, it hasn’t felt too big at all, except when it’s in my pocket.

Don’t misunderstand me, the Note 20 Ultra is still big and heavy, has a slight balance bias towards the top, and will stretch the pocket of your jeans. But what it’s not out of sync with other phones in its category. Forget the S21 Ultra too, you can put it alongside the Galaxy S21+ and find it’s not all that different. Obviously, the phone hasn’t gotten smaller, but the phones around it have certainly gotten bigger. The net result is the Note 20 Ultra no longer feels like an outsider, but rather just more “standard” at least among flagship phones. Phones weighing around 200 grams or more are commonplace, helping to make the Note 20 Ultra’s 208-gram weight feel “normal” when comparing it to the competition.

One thing to note is the unusual rattle you may hear on the Note 20 Ultra. It’s distracting and makes it sound like something is broken inside the expensive phone, but according to Samsung it is not supposed to be a fault or a concern and is apparently caused by the camera’s auto-focus system. Having used the Galaxy Note 20 Ultra on-and-off for nearly a year, the rattle remains but has not gotten worse or affected the camera’s operation.

Software and the stylus

My Galaxy Note 20 Ultra has Android 11 with Samsung’s One UI 3.1 installed, along with Google’s July Android Security Patch. It is all smooth, fast, and has been completely reliable. Compared to a Galaxy S21+, which has the same software, there are still a few differences, one of which I find frustrating. Swipe right on the home screen on the Galaxy S21+ and you can view either Google Discover or the Samsung Free feed. On the Note 20 Ultra, it’s fixed to Samsung Free with no option to switch. 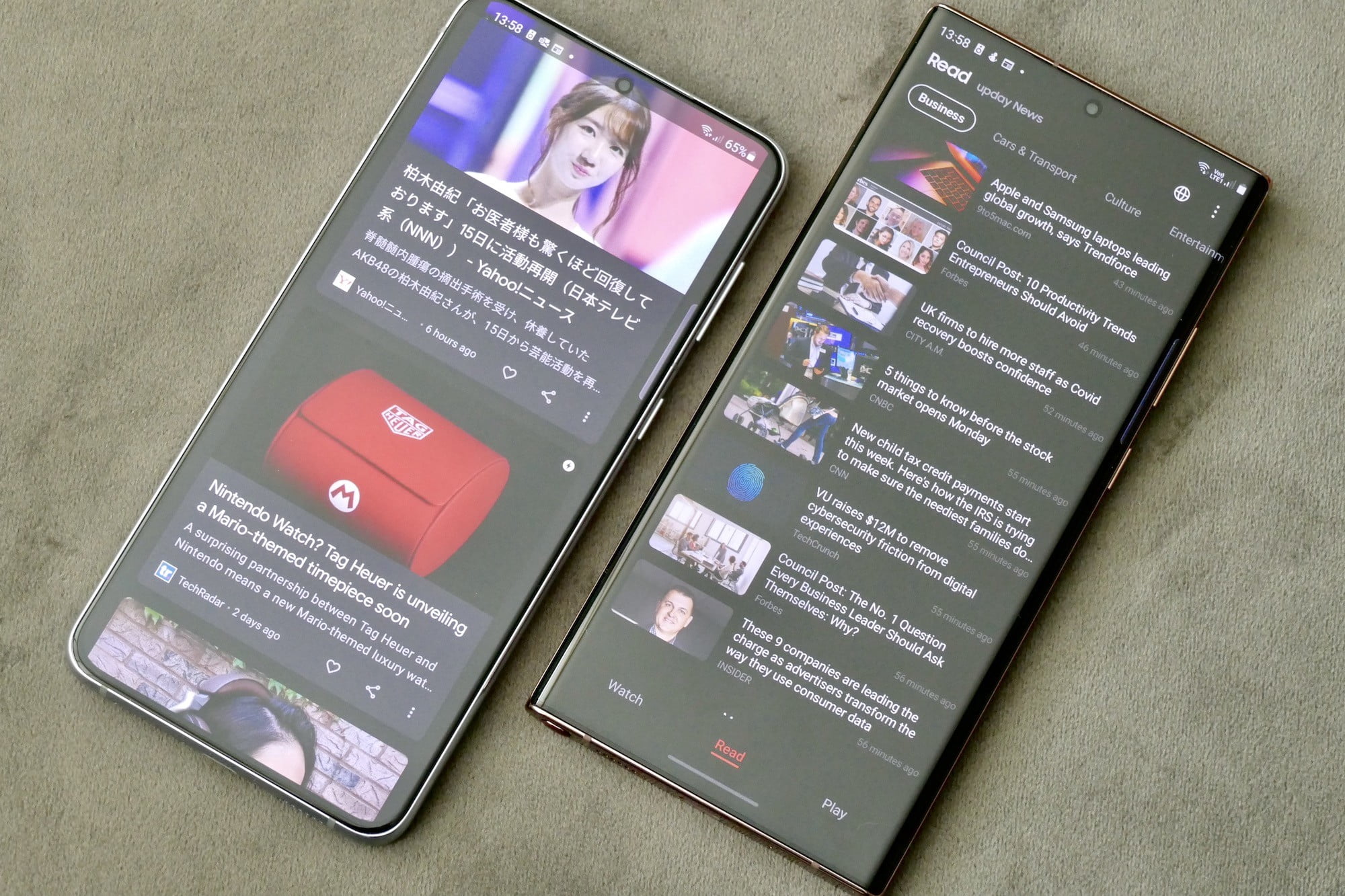 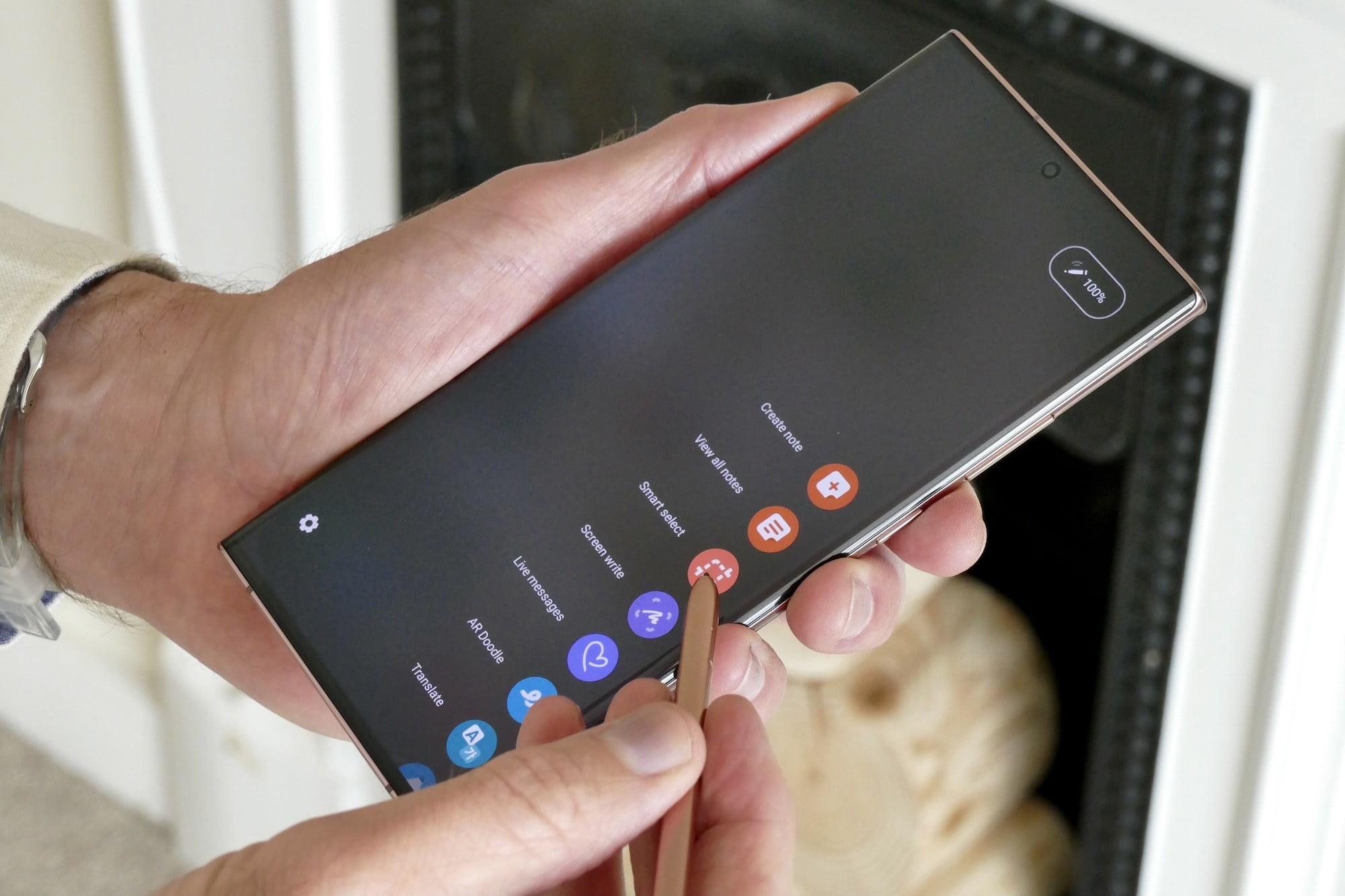 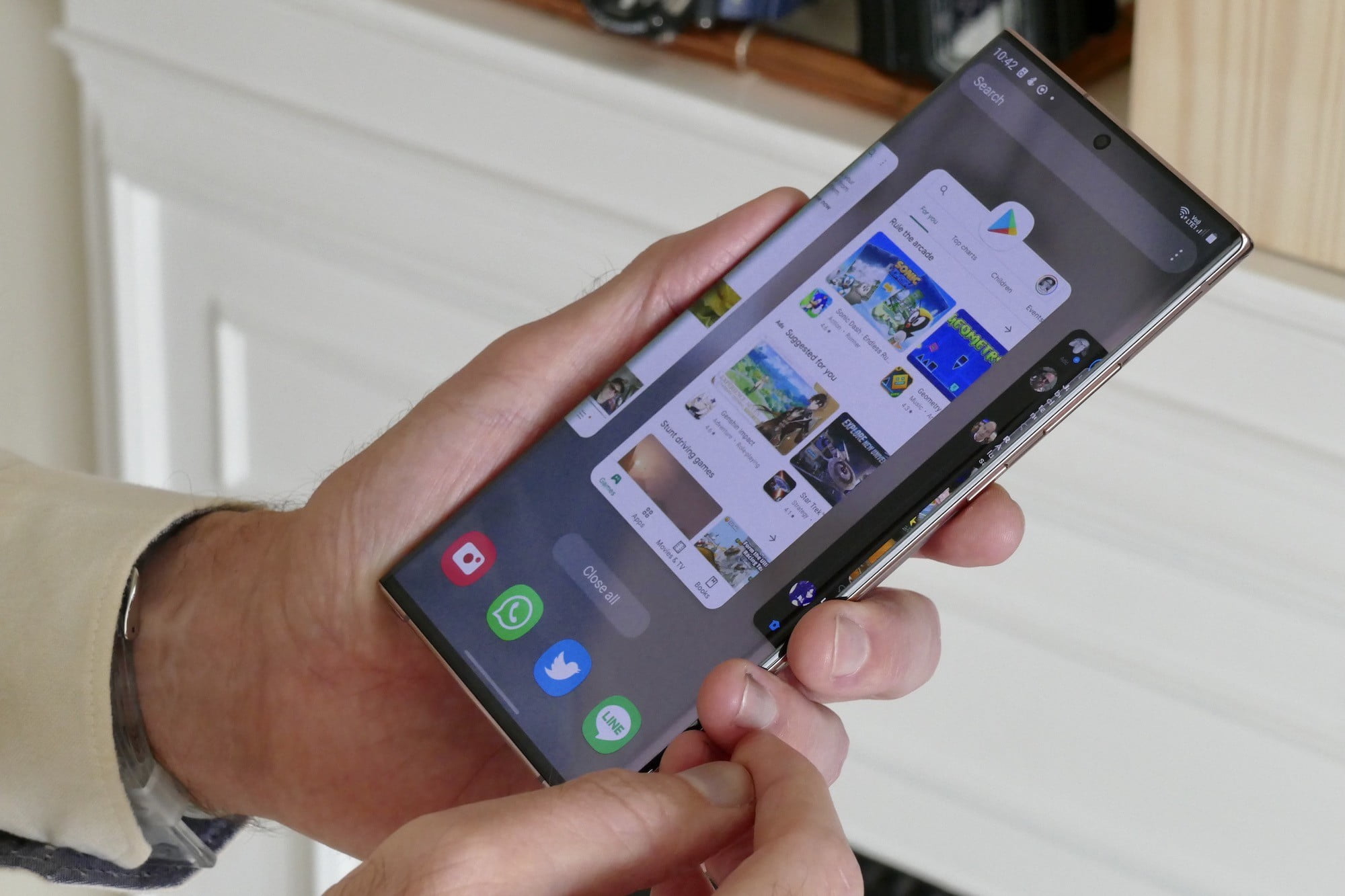 Samsung Free uses Upday as its news aggregator, which is a collection of news story links which when tapped only take you to another short, one-sentence overview of the story, forcing you to tap another link to go to the full piece. It’s littered with ads at each stage. Google Discover is more informative, less annoying, and if you regularly use Google’s services, better tailored to your preferences and effective at highlighting stories you may enjoy. Why this isn’t available on the Note 20 Ultra is a mystery.

I’m not an artist or a prolific note-taker, so I don’t exploit the S Pen stylus’s abilities in either of these areas, but I do find it useful as a remote shutter release for the camera. It works for both stills and video, and it allows you not only to adopt more natural positions when taking selfies but also to shoot video that needs less editing. It’s really helpful. I like the translation feature too, where hovering over text translates it to your chosen language. Although the translations are sometimes wobbly, it’s better than nothing and far quicker than copying and pasting the text into Google Translate or Papago.

The camera continues to be one of Samsung’s best. It doesn’t beat the Galaxy S21 Ultra, but its versatility — main, wide, and telephoto cameras — means it’s just as usable in everyday situations. Consistency between the main and wide-angle cameras is where it suffers most, with differences in exposure and dynamic range being immediately obvious. Focusing can also be problematic, and you need to force the camera to focus on your intended area when getting in close to a subject or make do with a tight central focus. 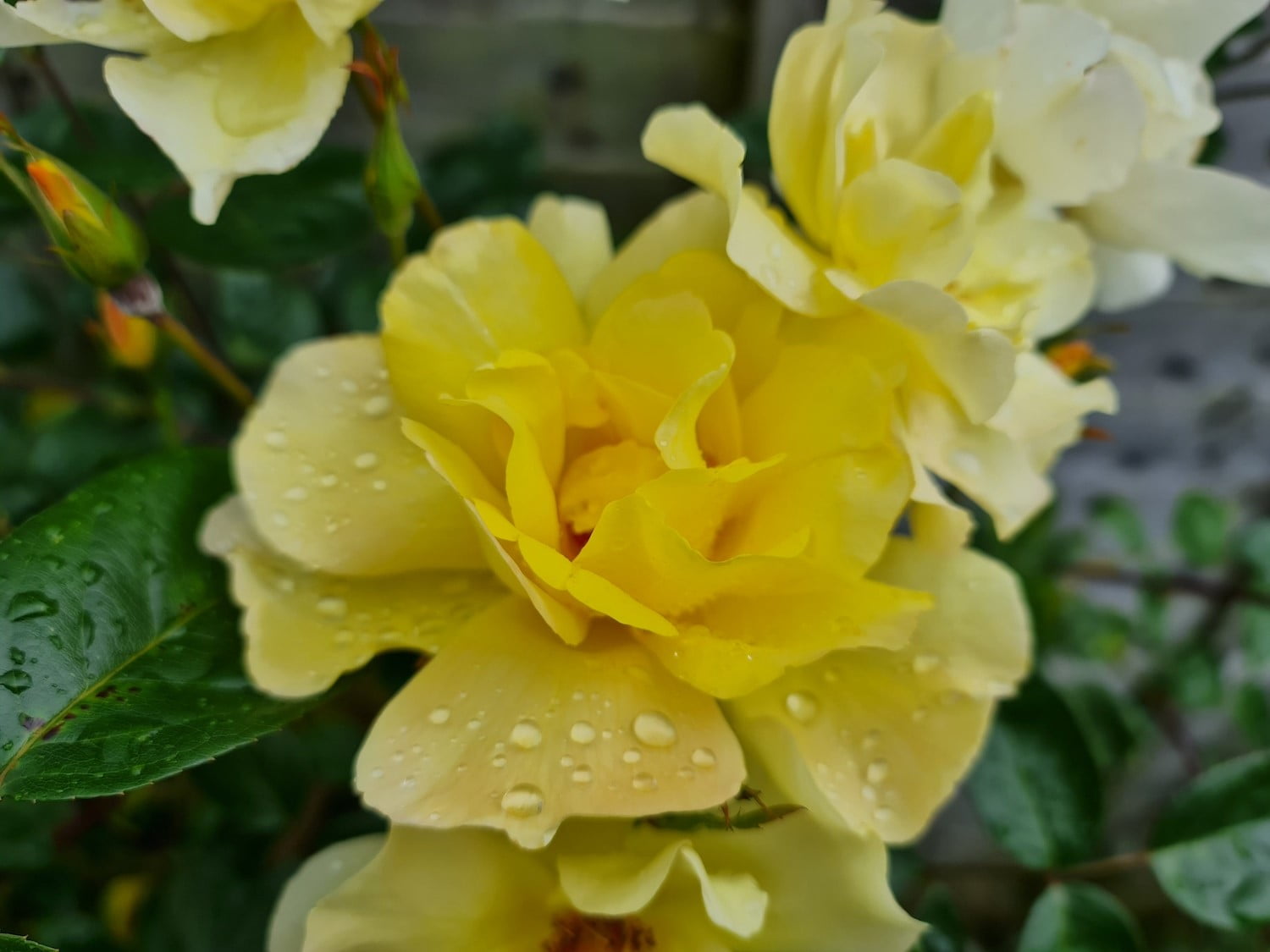 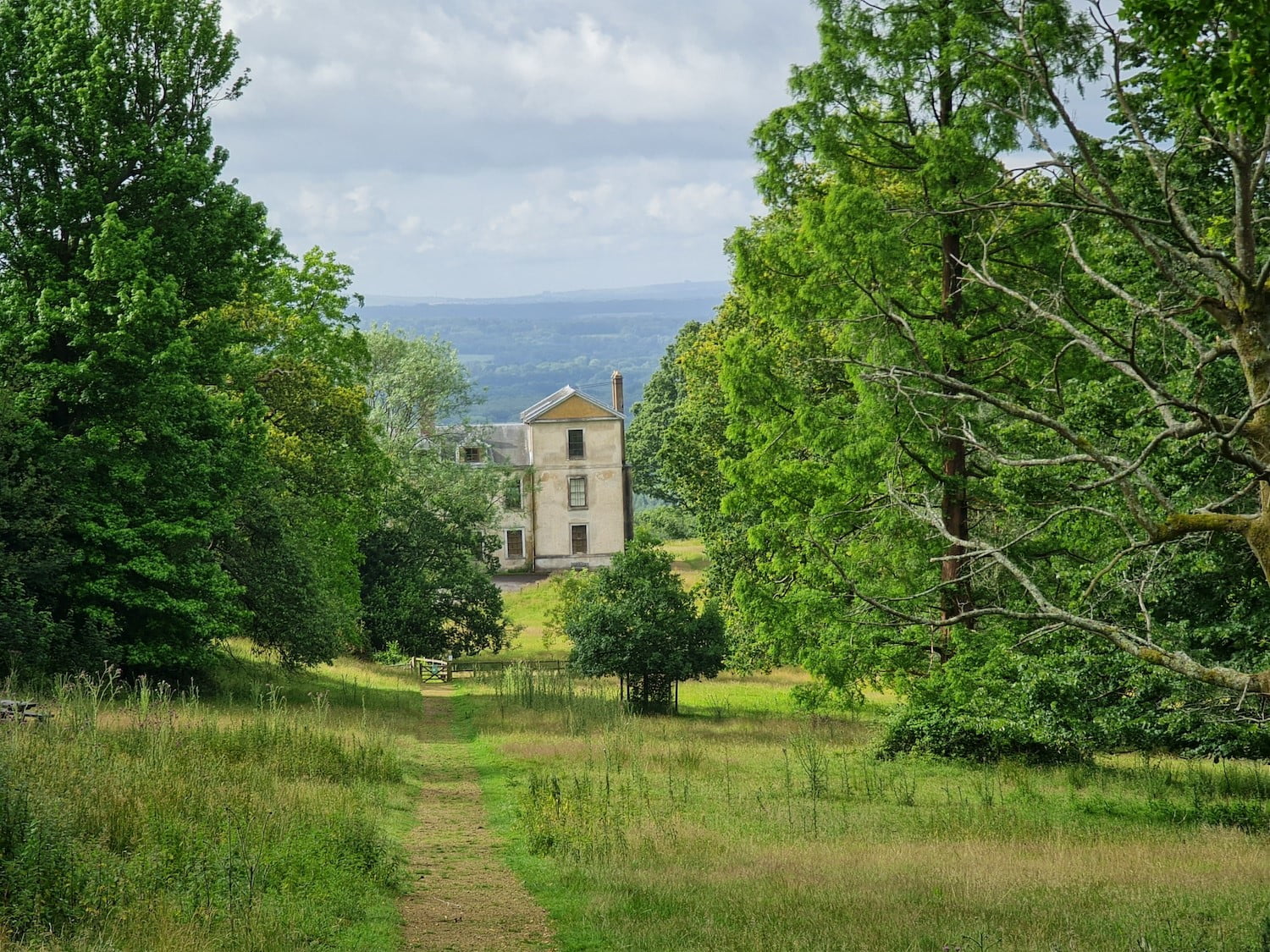 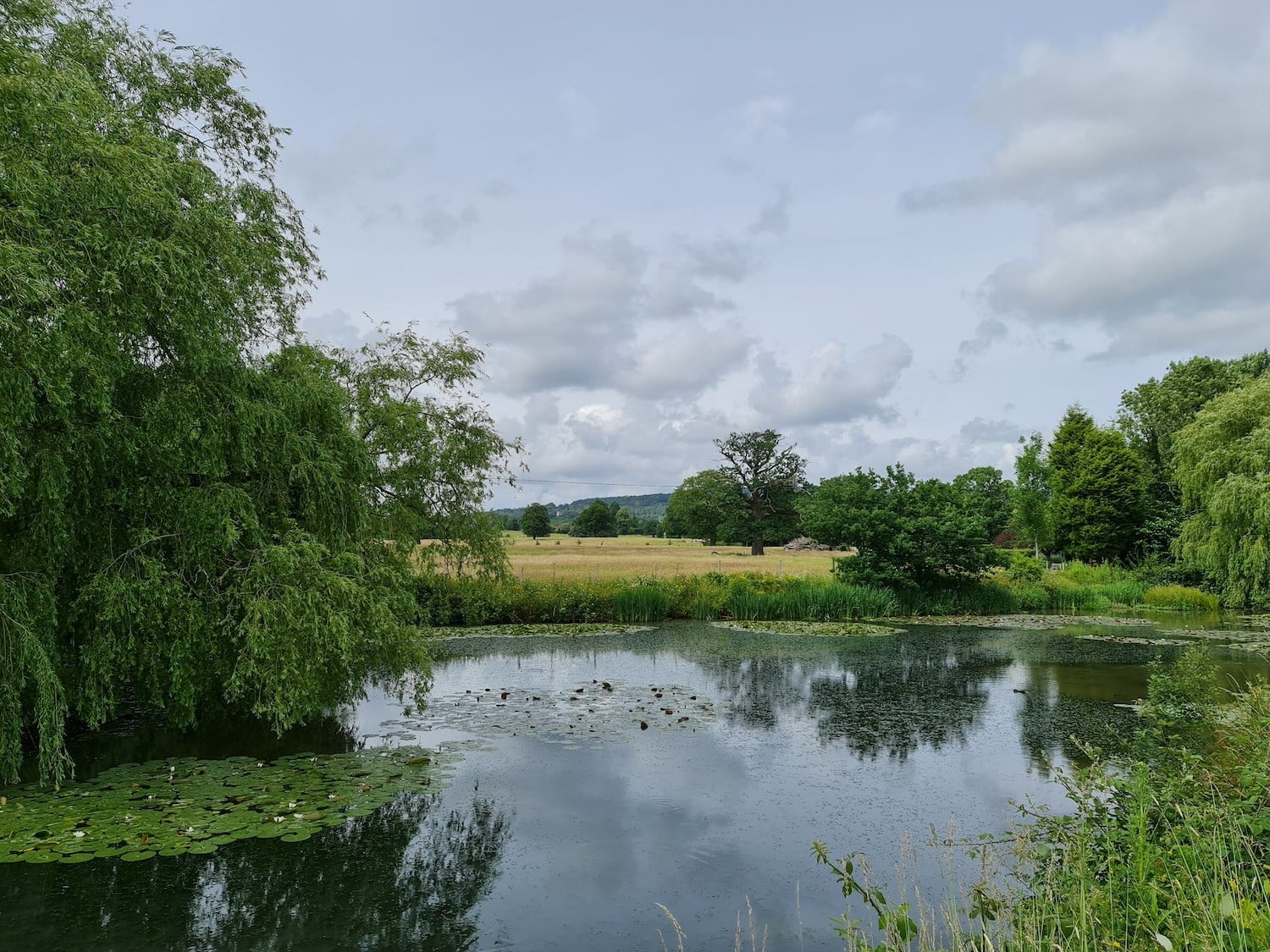 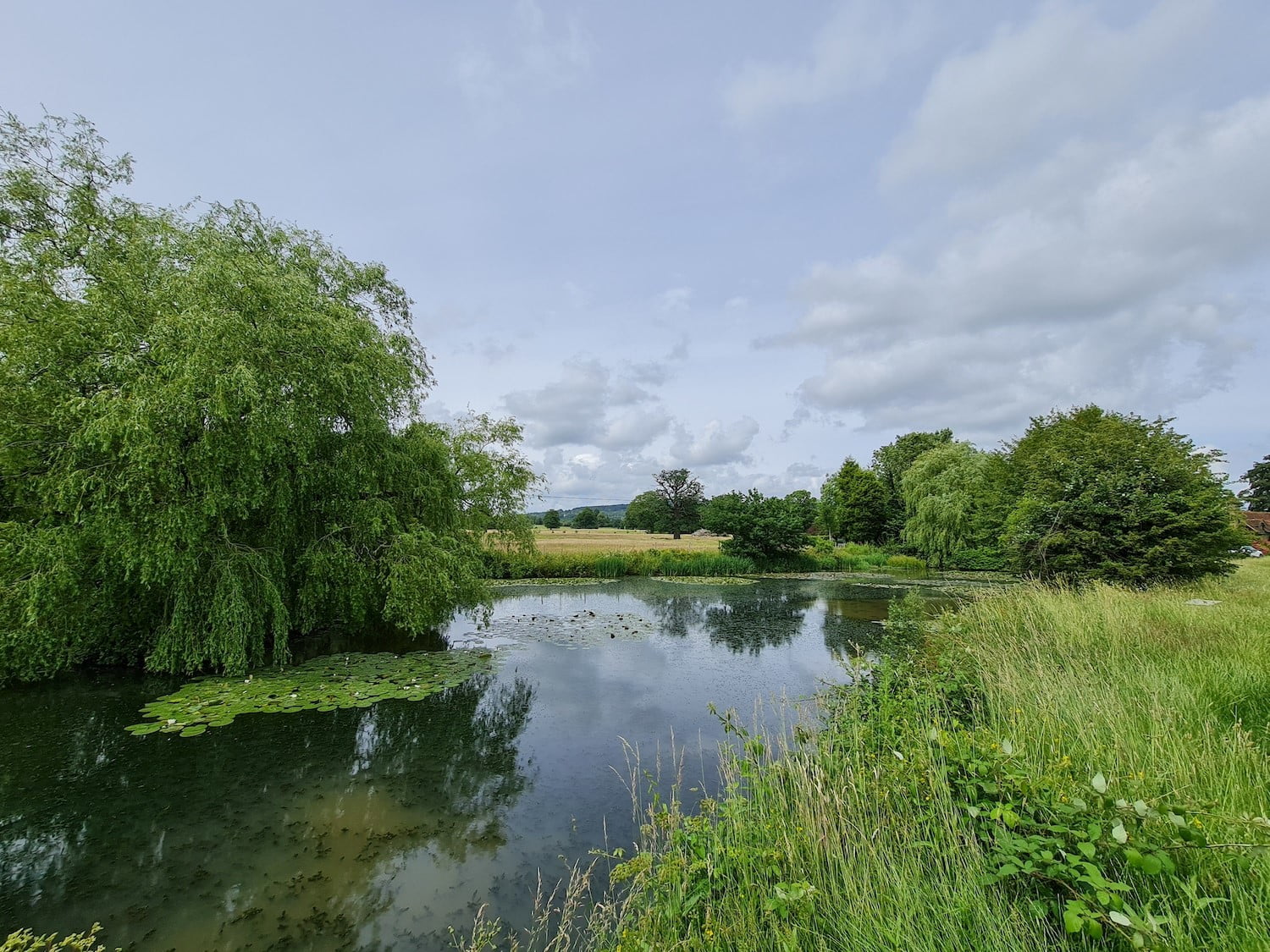 These points are not unique to the Note 20 Ultra’s camera and don’t spoil it in any meaningful way. It may not be Samsung’s camera superstar, but it comes very close, easily competing with phones like the OnePlus 9 Pro and the Oppo Find X3 Pro. I still think Single Take mode, which uses a quick video to create a selection of stills and sharable short video clips is enjoyable to use, and much more useful than most added features we get on cameras today.

My time with the Note 20 Ultra has been largely very positive, apart from one thing: security. It was bad in 2020, and it’s even worse now. The fingerprint sensor is so unreliable that I turned it off, and this is a really bad thing to have to do. Face unlock is ready as a backup, but is also slow, and only recognizes my face every three or four goes. Every other time I have to use my PIN code to unlock the Note 20 Ultra. Considering the cost of the phone, this isn’t acceptable.

The hateful fingerprint sensor’s problem is mostly hardware-based — it uses an old sensor compared to the vastly improved newer version on the Galaxy S21 Ultra — and if any software improvements have been sent through to get it working better, I haven’t noticed them.

If the security system worked as it should on the Galaxy Note 20 Ultra, it would be a no-caveat recommendation to buy today, but it doesn’t. It really lets an otherwise excellent phone down. The Note 20 Ultra is still the best phone to use with a stylus, for example, as even though the experience is similar on the S21 Ultra, there’s nowhere to keep the pen when you’re not using it unless you choose a chunky, ugly case.

It’s running the latest software and has received regular updates too, which is also something that will continue for a few years. The screen is fantastic, it’s no longer the in-hand monster it was almost a year ago (comparatively, at least), and the camera keeps up with most newer phones. I love the classy look, and the way it feels like a truly expensive piece of tech. It’s high quality all the way, if you ignore the fingerprint sensor, on the Galaxy Note 20 Ultra.

The case for buying the Note 20 Ultra in 2021 is hard to make, unless you’re absolutely set on having the S Pen with you at all times, and is mostly down to the poor performance of a very important piece of hardware, the fingerprint sensor, and Samsung charging less for a newer, superior smartphone. We really don’t need a new Galaxy Note phone this year, but a Note 20 Ultra FE would be very welcome, with only a change to the fingerprint sensor needed to make it an absolute winner.

Facebook
Twitter
Pinterest
WhatsApp
Previous articleBundled Notes is off to a great start, but Keep still beats it — for now
Next articleThe Alienware wireless gaming headset you’ve always wanted is over $100 off
- Advertisment -