HomeHow toThe best FARA 83 loadouts in Call of Duty: Warzone
How to

The best FARA 83 loadouts in Call of Duty: Warzone 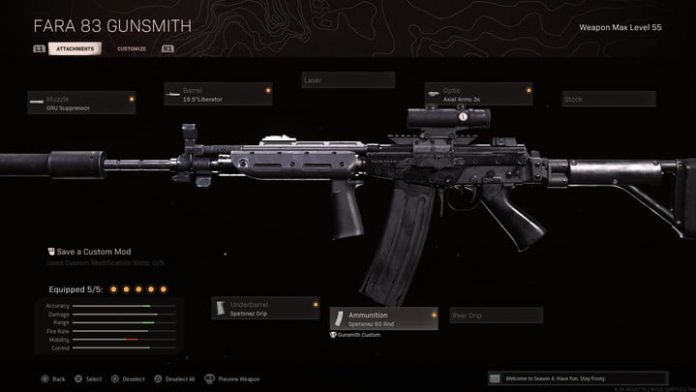 After the Season 4 Reloaded update in Call of Duty: Warzone, many of the game’s weapons were altered in one way or another. Some received nerfs, and others were buffed, but overall, the game’s meta is in an excellent place — offering many options for all playstyles. One weapon that did get nerfed slightly is the FARA 83, an assault rifle that dominated the meta for a while.

Despite its tweaks, the FARA 83 is still hands-down one of the best long-range rifles in the game, so it’s absolutely worth checking out. But which attachments should you use with it? And what kind of perks and equipment should you bring with each loadout? In this guide, we’ll detail three of the best FARA 83 builds in Call of Duty: Warzone.

The FARA 83 is one of the leading assault rifles in Warzone. That’s thanks to its fast time to kill (TTK), relative ease of use, and forgiving playstyle, thanks to its high rate of fire. According to TrueGameData, the FARA has a faster TTK than the AK-47 (CW), Krig 6, and C58 past 40 meters or so — making it a top choice for a long-range assault rifle. Its rate of fire is 790 rates per minute, and its max bullet velocity is around 1125 meters per second (when using the best attachments), which is highly competitive.

Of course, the FARA 83 isn’t without its downsides — no weapon is flawless (at least in the game’s current state). It has painstakingly slow reload and aim down sights (ADS) times, making it tough to use in close-quarters situations. Of course, you can deck out the FARA 83 with various attachments to help with many of its downsides or to allow it to reach its potential.

Here are three ideal loadout choices we recommend for the FARA 83.

The most popular way to use the FARA 83 is at long range past 27 meters or so. It’s not totally unusable within 27 meters, but the weapon truly shines beyond that. For best results, we advise always using the GRU Suppressor Muzzle to keep you from appearing on the mini-map when firing while improving your vertical recoil, bullet velocity, and effective damage range. Full stop, there isn’t much of a reason to use any other muzzle with this weapon.

Next, the 19.5-inch Liberator should be your go-to, as it offers the best boost to bullet velocity, along with additional recoil control. Remember, bullet velocity is how fast a bullet travels, dictating how much you need to lead your shots. The higher the bullet velocity, the better, as it means you won’t have to aim in front of your target as much. Of course, with this being a long-range option, you should definitely come equipped with an Optic, preferably the Axial Arms 3x. This gives you plenty of zoom with a fairly clean sight. If this is too much or too little, feel free to adjust accordingly.

To improve your recoil control, we highly recommend using the Spetsnaz Grip Underbarrel. This is key when using the weapon at long range, as recoil control can be the difference between winning and losing a gunfight. And since the weapon was recently nerfed to have slightly more recoil, this Underbarrel is even more necessary now.

Finally, we always recommend an increased magazine — in this case, the Spetsnaz 60 Rnd. One thing to note is that the FARA 83 has terrible reload times, so you might want to opt for the VDV 60 Rnd Fast Mag instead. But just note that doing so will penalize your ADS speeds, so it’s a trade-off. Typically, when using the weapon from afar, it’s easier to get behind cover to reload, but this is very situational.

As for a secondary, we like an aggressive handgun such as the Diamatti or Sykov. These cover your bases up close while allowing the FARA to serve as a fantastic long-range option. Better yet is if you pair the FARA with an actual SMG like the LC10 or PPSh-41, which is a deadly combo (at the expense of skipping over the Ghost perk).

Speaking of perks, we typically have a couple of highlights, including E.O.D. for the first slot, Ghost for the second, and Amped for the third. Though, if you’re playing on Rebirth Island, we typically like to switch it up. In this case, we recommend Quick Fix, Ghost/Overkill, and Tracker. This setup is better for fast-paced situations that occur on Rebirth.

As for your equipment, we almost always advise bringing throwing knives as your lethal, so you can quickly finish off a downed player without wasting ammo, and a heartbeat sensor to see un-Ghosted players nearby. This setup is especially effective on Rebirth, as well. Though, if you’re staying away from players up close, swapping your throwing knives for claymores might be a good option.

Since snipers are so prominent in Warzone, bringing a sniper support weapon along is ideal. These are weapons that hold their own up close but are also effective just before sniping range at around 40 meters or so (depending on the situation). Typically, a sniper support weapon won’t excel in all situations but is great for ensuring most of your bases are covered.

With this FARA 83 build, keep the GRU Suppressor Muzzle for the reasons listed above. If you plan on using it in closer-range situations, you can swap over to the regular Suppressor to improve your ADS speed, but you’ll likely get outgunned against someone using an SMG anyway. Then, swap over to the 18.7-inch Spetsnaz RPK Barrel for a boost to bullet velocity, horizontal and vertical recoil control, and effective damage range. This doesn’t boost your bullet velocity as much as the Liberator Barrel, but that’s OK since your sniper should cover your long-range battles for you.

Speaking of which, we advise switching over to the Microflex LED Optic for this build since you won’t need as much zoom. This will also penalize your ADS speed less than the Axial Arms 3x, so it’s recommended for the sniper support loadout. Stick with the Spetsnaz Grip Underbarrel, as always, since recoil control is still important in this case.

Lastly, it’s recommended to use the 45 Rnd Speed Mag Ammunition here since you’ll need faster ADS times and reload speed to compete with others at around 15 to 40 meters. Since you’ll be closer when using this build, you’ll need fewer bullets to take down your targets, so you can get away with the smaller mag size. This will make your weapon feel lighter as well, which is ideal for a sniper support build.

For a secondary, you’ll want a sniper — preferably the Kar98k or the Swiss K31 since those are great for fast and aggressive playstyles. Heavier snipers like the ZRG 20mm are viable as well, only they’re harder to use due to being slower.

As for perks, our recommendations from above still stand. Overkill is great since you’ll need two primary weapons, but you can also have a version of this build with Ghost. This will then allow you to grab two loadouts in a match so you’ve got your two primary weapons while remaining Ghosted, which is essential for the later portions of a match. Grabbing two loadouts is a common practice in Warzone.

You have some flexibility with equipment when using this build. We still love using the throwing knife/heartbeat sensor combo, but Molotovs and stuns work great as well. Just steer clear from using decoy grenades since they aren’t as practical as most other equipment.

For our final build recommendation, we’ll cover a standard mid-range loadout. This is ideal for those looking to challenge players at around 30 to 75 meters. You’ll definitely want to bring an SMG with you alongside this version of the FARA 83 to cover yourself up close. This build is a slight variation on the previous one, only with slightly more range in mind.

As always, start off with the GRU Suppressor Muzzle for the same reasons listed above. Then, stick with the 18.7-inch Spetsnaz RPK Barrel (as opposed to the Liberator) to preserve your recoil control, ADS speeds, and bullet velocity. Follow that up with an Optic again, but this time, we advise going with the Visiontech 2x. From here, make sure you customize the reticle since the stock option isn’t the best. We like the On Point reticle, but go with what you’re comfortable with.

Stay with the Spetsnaz Grip Underbarrel for this build, and finish it off with the VDV 60 Rnd Fast Mag. Since you’ll be challenging players at a closer distance than with the long-range build, you’ll want to have faster reload times so you don’t get caught off-guard. Going with the standard 60 Rnd mag isn’t a bad option, but you’ll likely reap the benefits of the Fast Mag when using the FARA 83 at mid-range. It’s a trade-off for sure, but the FARA’s slow reload times have gotten us killed multiple times, so give the Fast Mags a try.

For this loadout, we highly suggest bringing an SMG or shotgun, preferably one that has a fast TTK up close. The OTs 9, MP5 (MW), Streetsweeper, or Gallo SA12 are all fantastic options here.

When choosing your perks, stick with the ones recommended above, as well as the equipment. In Warzone, there isn’t a ton of variation when it comes to perks and equipment, but here’s hoping that will change as the game continues to evolve. The standard is to use a heartbeat sensor along with Molotovs or a throwing knife.