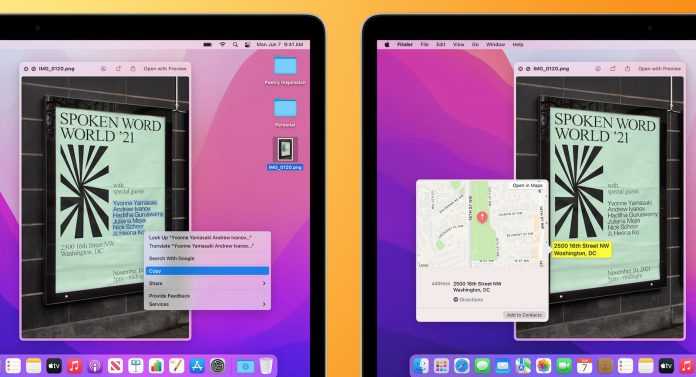 The latest beta update of macOS Monterey, released to developers today, has brought Live Text functionality to Intel-based Mac computers, removing the requirement for users to use an M1 Apple silicon Mac to utilize the feature, according to Rene Ritchie.

Live Text, included in the forthcoming ‌macOS Monterey‌, iOS 15, and iPadOS 15 updates, allows users to interact with text within images, such as phone numbers, addresses, and more. With Live Text, text inside images also becomes selectable, allowing users to cut and copy the text into apps.

Apple at first stated that an ‌M1‌ Apple silicon Mac is a requirement for Live Text on ‌macOS Monterey‌, but with the latest beta, it’s been expanded to Intel-based Mac computers.

Sounds like Apple prioritized it based on demand, but it was made much easier by the lack of real-time requirements for a camera system

(So instead of kicking it to the ANE, it’ll just process opportunistically) pic.twitter.com/vM5Nd7TGh8