HomeNewsApple's Digital Car Key Feature Will Soon Work With Your iPhone in...
News 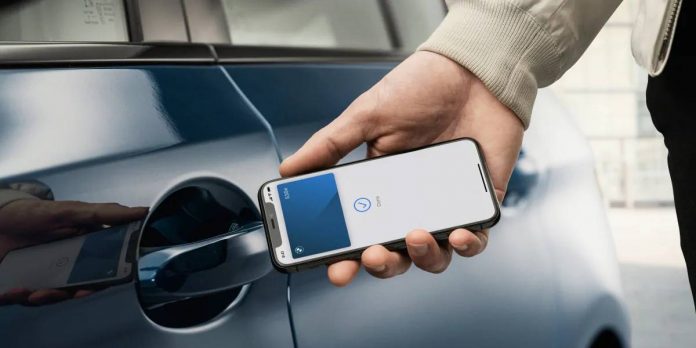 The Car Connectivity Consortium today announced that its Digital Key 3.0 specification with support for Ultra Wideband and Bluetooth LE connectivity is finalized and now available to members, including Apple.

In 2020, Apple introduced a digital car key feature that allows users to unlock and start a compatible vehicle by holding an iPhone or Apple Watch near the driver-side door. The feature is powered by the NFC-based Digital Key 2.0 specification, and once Apple moves to Digital Key 3.0, users will be able to unlock and start a compatible vehicle without needing to take their iPhone out of their pocket or bag.

The improved Ultra Wideband version of Apple’s car key feature would require devices with the U1 chip like iPhone 11 and iPhone 12 models.

Digital Key 3.0 also improves security, as Ultra Wideband’s precise location awareness is said to prevent relay attacks, where the radio signal between the iPhone and vehicle is jammed or intercepted by another party. NFC support is maintained to ensure backward compatibility and, in Apple’s case, the ability to use the car key feature to unlock a vehicle for up to five hours after an iPhone has run out of battery power.

Similar to credit cards and boarding passes, digital car keys are stored in the Wallet app on an iPhone or Apple Watch running iOS 13.6 or watchOS 6.2.8 or newer. So far, the feature is only compatible with select BMW models manufactured since July 2020, but a Korean report claimed that Hyundai plans to start offering the feature later this year.

Apple previously said the new version of its car key feature with Ultra Wideband support would be available in 2021, but the company did not provide an exact timeframe. BMW previously said its first vehicle with support for Digital Key 3.0 would be available in Europe starting in late 2021 and in North America by early 2022.Tag: CarKey
This article, “Apple’s Digital Car Key Feature Will Soon Work With Your iPhone in Your Pocket” first appeared on MacRumors.com