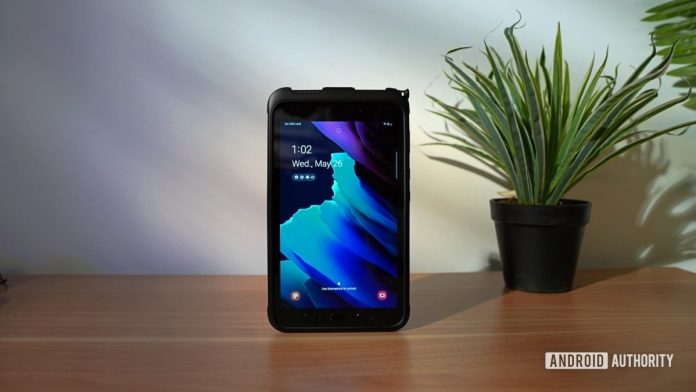 The Samsung Galaxy Tab Active 3 is a rugged tablet designed to meet the needs of mobile workers. It brings back many key capabilities of the Tab Active 2 — including its military-grade design, enhanced touch for use with gloves, and a replaceable battery — and adds new innovations such as a programmable key, Wi-Fi 6/MIMO connectivity, and Samsung wireless DeX support.

The device ships with an included protective case in the box allowing it to withstand drops of up to 1.5 meters. It also comes with an S Pen which, like the device itself, is IP68 rated for water and dust protection.

Related: The best android tablets of 2021

The third generation of the Galaxy Tab Active series comes with a couple of key spec upgrades over its predecessor. It ships with the octa-core Samsung Exynos 9810 CPU, 4GB of RAM, and a 1,920 x 1,200 LCD display. It also now has 64GB of starting storage, with the option to add in a microSD card for more space.

The Galaxy Tab Active 3 is available in North America with a starting price of $489.99 for the Wi-Fi-only version and $589.99 for the LTE model. It comes in a single black colorway. It is also available to buy in Europe and select markets in Asia.

How is the design? 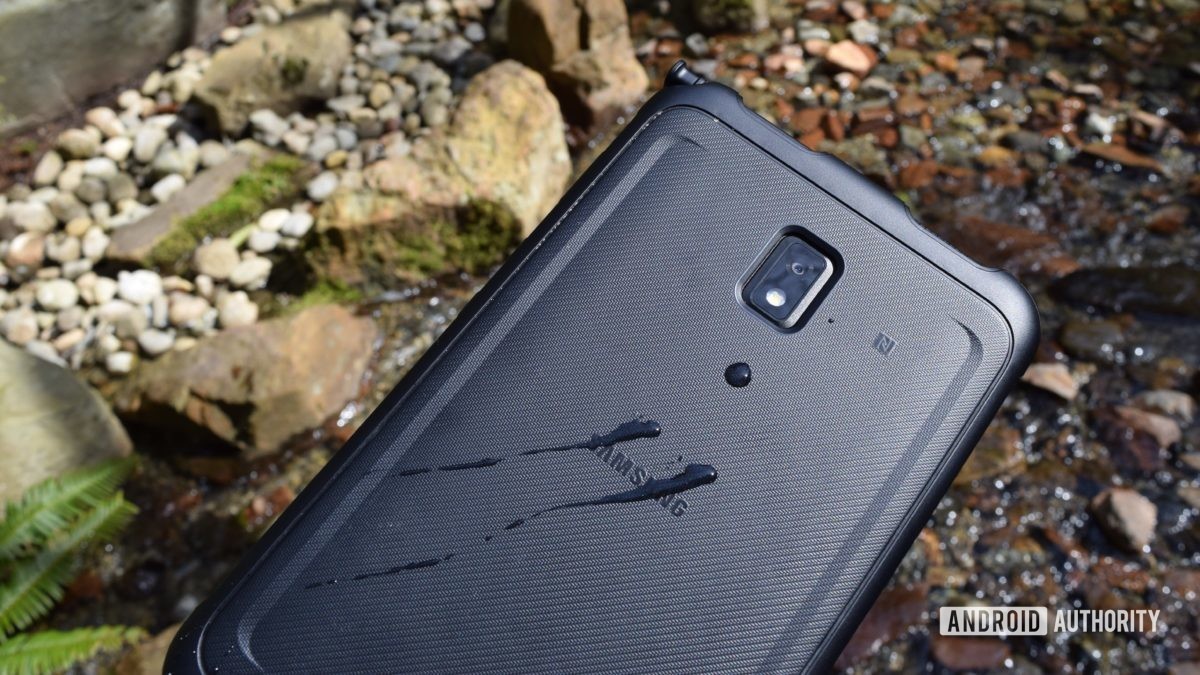 Samsung focused on utility when designing its Active series tablets. The massive screen bezels and clunky plastic chassis on the Galaxy Tab Active 3 are reminiscent of the original Galaxy Tab from over a decade ago. However, the design enables the device to excel at its main objectives: durability and productivity.

With the included shock absorption case attached, the device has a military standard MIL-STD-810H rating (the more rigorous successor to MIL-STD-810G) to survive drops of up to 1.5 meters. It also has an IP68 rating fit to survive dust, dirt, and water submersion at a depth of 1.5 meters for up to 30 minutes.

The design enables the device to excel at its main goal: durability.

The Galaxy Tab Active 3 also has a couple of neat features that frontline workers will appreciate. A hotkey button on the side of the device can be mapped to quickly launch your most important apps with either a single tap or long-press. There are also physical home buttons on the bottom of the device and a high touch-sensitive mode allowing for use when wearing gloves. The S Pen fits snugly into the top of the case, and I found it works great for signatures, filling out forms, or taking notes on the go.

One potential area of concern to note is the lack of flaps to protect the charging and headphone ports from getting dirt and moisture stuck inside. This is a staple design feature of most rugged devices and cases, and while I didn’t come into any problems during my testing period, it could become problematic for long-term durability.

How powerful is the Galaxy Tab Active 3? 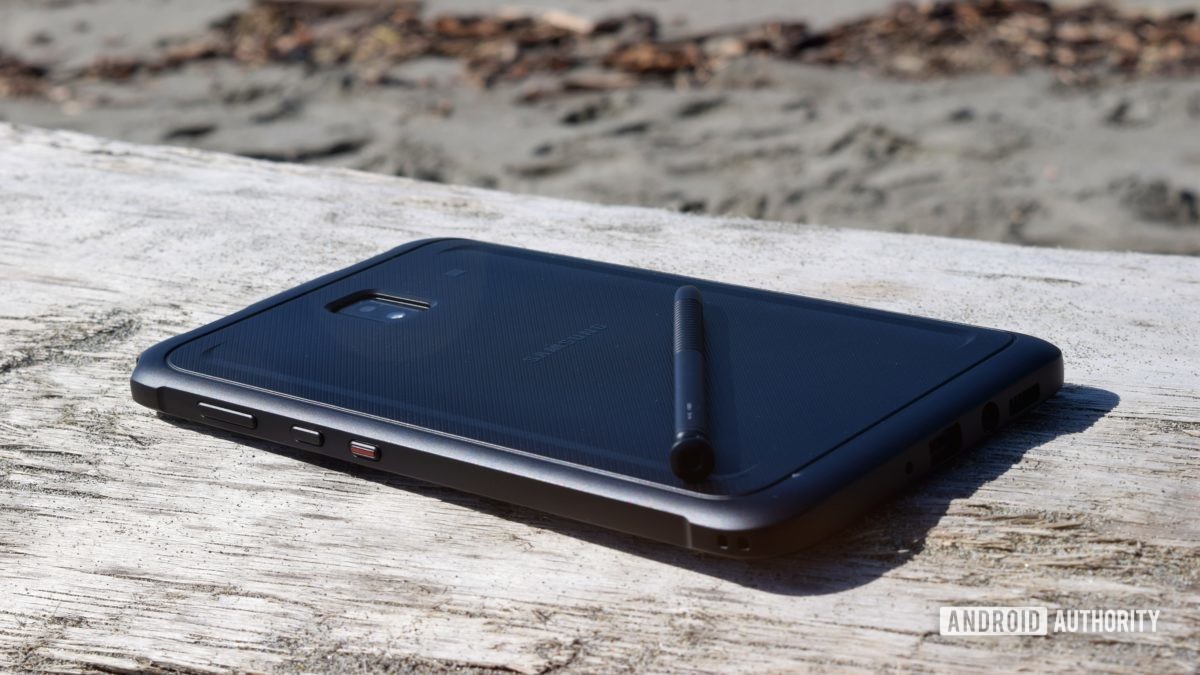 You won’t find the latest flagship specs on the Galaxy Tab Active 3, but it does have enough processing power to make it through most everyday tasks. Reading the spec sheet on the Galaxy Tab Active 3 took us on a trip down memory lane, with most of the performance specifications resembling the Galaxy S9 that Samsung released over three years ago. Still, unless you plan on doing real heavy multitasking or running CPU-intensive applications, you likely won’t run into performance slowdowns on the device. I never experienced any hiccups when browsing the web, writing emails, or switching between multiple apps.

The front and rear cameras on the device perform great for scanning items or taking quick shots on the go. The tablet also supports Google ARCore to enable augmented reality experiences and services. 4G LTE will be appreciated by anyone who needs internet connectivity on the go, although the lack of 5G support is a bit noticeable for a mobile device in this price range in 2021.

The three-year-old Exynos 9810 CPU shows its age when you have multiple tabs on the go but it’s a perfectly capable performer for everyday tasks.

The software experience isn’t too far off from stock Android, with Samsung One UI adding some additional productivity features. You won’t get access to desktop-class applications on an Android tablet like you would on a Windows alternative, though there are plenty more mobile applications available in the Google Play store. A long-standing issue with Android tablets is the lack of app optimization for the larger screen size on tablets, though most major applications ran smoothly on the Galaxy Tab Active 3.

The Galaxy Tab Active 3 also has Samsung DeX support, which enables users to connect the tablet to a keyboard and monitor for a PC-like setup. This feature works great for showcasing content from your tablet on a larger display, but don’t expect the tablet to replace your main computer for any serious work. That three-year-old Exynos 9810 CPU with only 4GB of RAM really starts to show its age when you have multiple tabs on the go. 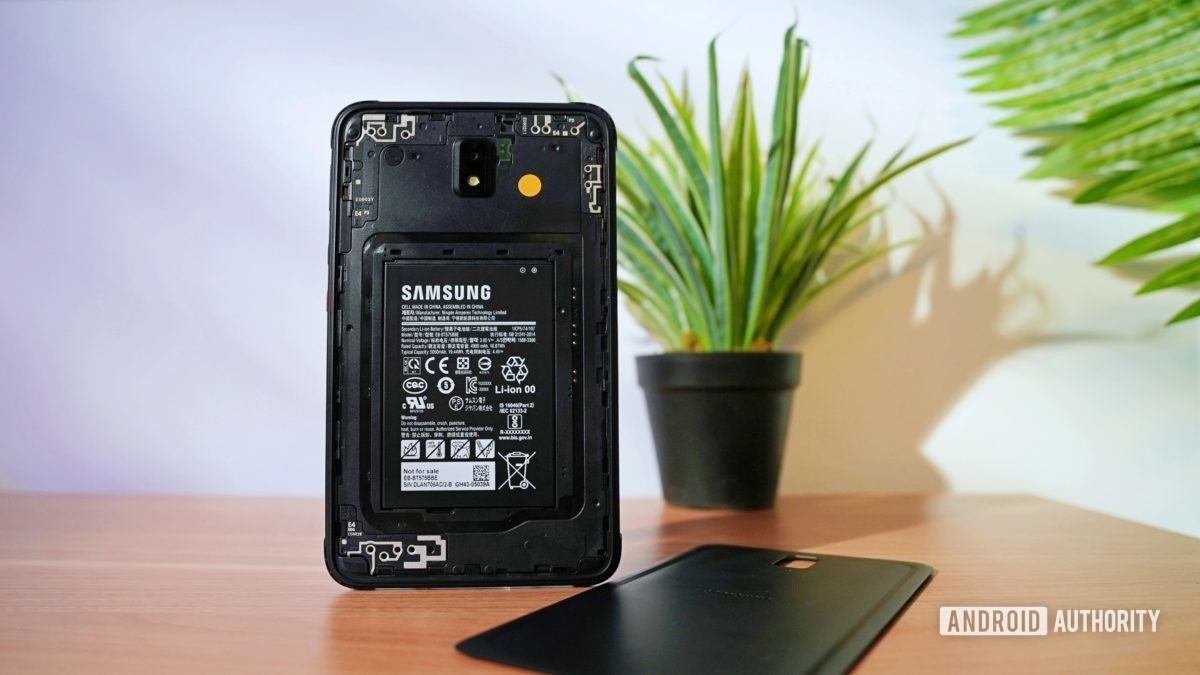 The Samsung Galaxy Tab Active 3 has a couple of tricks up its sleeve so you’ll never have to worry about running out of power. The tablet ships with a 5,050mAh battery, which is enough to nearly power the device through an eight-hour shift with typical use. Fortunately, you can pop off the back cover of the tablet to quickly swap out the battery for a fully charged one when needed. There’s also 15W fast charging available via the USB-C port or POGO connector. If you plan on using the device all day away from a power outlet, I would recommend picking up a spare battery so you can swap it on the go. Keep in mind though that taking the protective case off the device every time you want to swap the battery is a bit of a pain.

If you plan on using the tablet in a fixed position and connected to a charger, the Galaxy Tab Active 3 can function without a battery installed. While I personally didn’t find a use for this feature, I could see it being valuable for business with multiple Galaxy Tab Active 3 devices, as you could take out the batteries in stationary devices to use as spares for ones out in the field.

The Samsung Galaxy Tab Active 3 is a rugged tablet designed to meet the needs of a mobile worker. It features MIL-STD-810H and IP68 protection, as well as an enhanced touch mode for use with gloves and the ability to be used without a battery.

At a starting price of nearly $500, it would be hard to call the Galaxy Tab Active 3 a value buy based solely on the specs listed above. However, this tablet suitably fills a very specific role for a niche market of frontline workers and comes in at a reasonable price compared to the competition.

While Samsung is the biggest player in the Android tablet space, there are some other rugged tablet options that may better suit your needs. Vanquisher offers an 8-inch tablet with an integrated barcode scanner for $599.99, but it lacks biometric security sensors and the battery flexibility of the Galaxy Tab Active 3. At the top end of the market is the Panasonic Toughbook A3, which offers a configurable gadget area with a dual hot-swap battery design, but at a hefty price of over $2,000.

Outside of Android, the iPad Mini 5 from Apple offers more widespread third-party support and integrations in a similar form factor and price point as the Galaxy Tab Active 3. For desktop-class programs and applications, check out a Windows-based rugged tablet option such as the MobileDemand Flex 10B. Any of these devices can be used with a stylus, though none offer the integration of the S Pen with Samsung One UI.

If you’re looking for a rugged tablet for kids, you’re better off picking up an Amazon Fire Tablet for Kids for a fraction of the price. Due to the work-centric features, the Galaxy Tab Active 3 just isn’t a great fit for little ones. 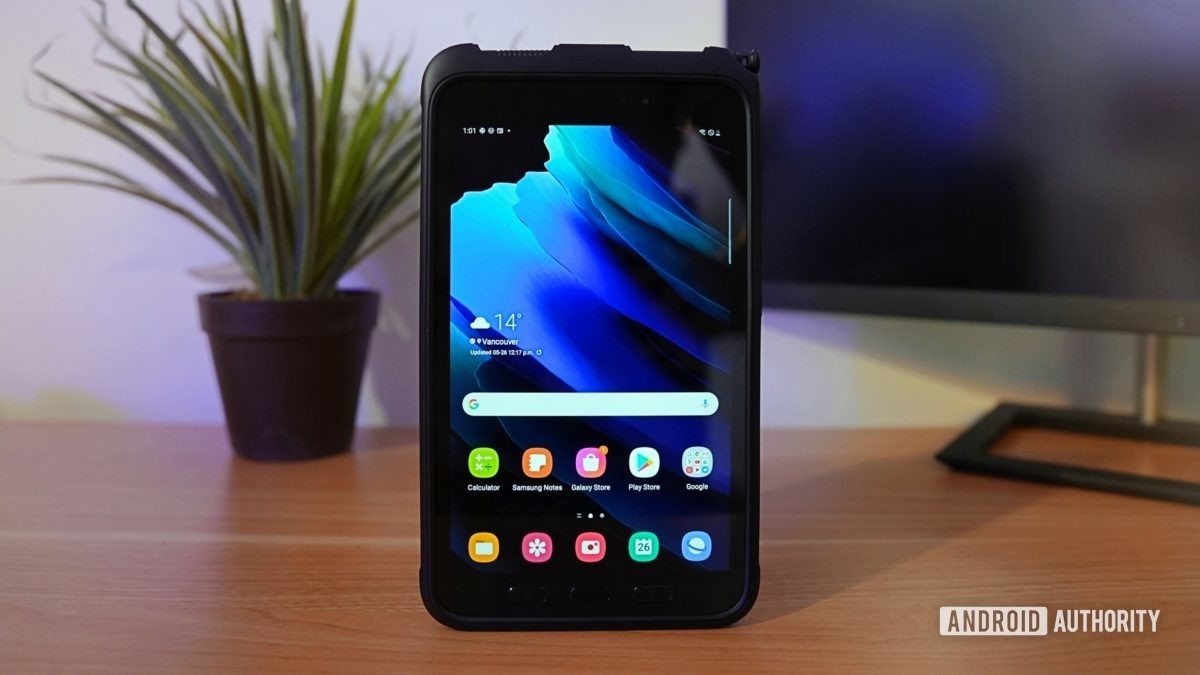 Durability and productivity are the cornerstones of the Samsung Tab Active series, and the Galaxy Tab Active 3 continues to excel in these areas. The improved military-grade protection, programmable key, and ability to be used without a battery add impressive versatility and functionality to the device.

Even though its specs become more outdated with each passing day, the Galaxy Tab Active 3 has enough power to deliver on most of the day-to-day tasks you could demand of it. Compared to other tablets in its category, it offers good value for your money, especially if you can pick it up at a bulk or discounted rate.

Durability and productivity are the cornerstones of the Samsung Tab Active series, and the Galaxy Tab Active 3 continues to excel in these areas

The Galaxy Tab Active 3 is a worthy successor to previous generation rugged tablet devices from Samsung. The military-grade toughness, S Pen, and battery versatility help the device to stand out as a true workhorse. Chances are you already know whether or not this tablet is for you. If you’re a frontline worker, business owner, or if any of the unique pro features of the device made you go “I need that,” then don’t hesitate to pick up the Galaxy Tab Active 3 — you won’t be disappointed.