HomeHow toCall of Duty: Warzone PPSh-41 loadout guide
How to 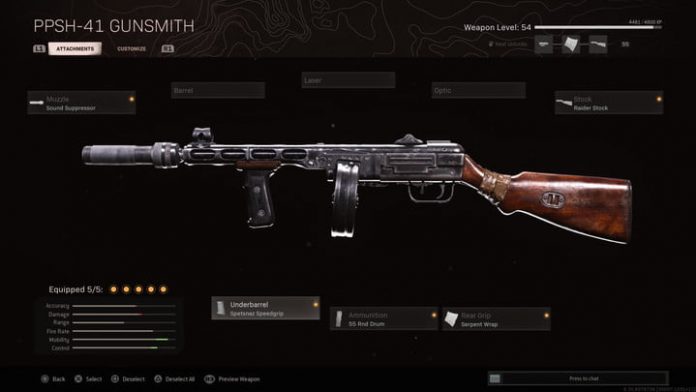 As part of Call of Duty: Warzone season 3, developer Raven Software has added the PPSh-41 SMG, a weapon with a high ammo count and respectable accuracy. The PPSh-41 was first introduced in 2008’s Call of Duty: World at War and hasn’t made an appearance in the series since then. That’s why fans are so excited to get their hands on the weapon in Warzone. It’s an easy weapon to use, and there are a variety of different builds that you might want to consider trying.

In this Warzone loadout guide, we’ll go through the best PPSh-41 builds, with details on recommended attachments and how they work.

Before diving into the recommended builds, let’s first touch on where the PPSh-41 falls in terms of the game’s meta. Thanks to the massive weapon overhaul implemented by Raven Software as part of the season 3 update, many close-range weapons are much more practical to use. This comes mostly due to the nerf of the FFAR 1, which was overpowered in nearly every way. Thankfully, that weapon has been changed, and the game’s meta is now better off because of it. With that in mind, be aware that yes, you can definitely compete when using the PPSh-41, though there are a few things you should know.

The first thing is that the PPSh-41 has difficulties competing against other SMGs up close, such as the MP5 and MAC-10. That doesn’t mean you should skip out on this weapon completely, though, as it makes up for its close-range shortcomings in other ways. For instance, it outperforms many SMGs at medium range, past 15 meters or so. It also has a large magazine size, low recoil, and usable iron sights. It absolutely has its perks and is recommended — just be aware that it also has its downsides.

With all of that out of the way, let’s jump into the first PPSh-41 loadout, which is built for close range. With a build like this, your goal should be to preserve mobility and aim down sights (ADS) speeds. Many attachments add to the weight of your weapon, which not only slows down your movement but your ADS speeds as well. Start off with the standard Sound Suppressor muzzle to keep from appearing on your enemy’s mini-map when firing. Normally, we’d recommend using the GRU Suppressor, but since you’ll be using it up close, you’ll want the lightweight suppressor instead.

Then, apply the Raider Stock to improve your ADS firing move speed, your aim walking movement speed, and sprint to fire time. All of these bonuses are ideal for close quarters. After that, we advise that you use the Spetsnaz Speedgrip for improved sprinting move speed, plus horizontal recoil control. When it comes to the PPSh-41, you should always at least use the 55 Rnd Drum. Sure, it’ll hurt your movement speed and ADS times, but in Warzone, it’s tough to get away with anything less than 40 rounds in a mag. Finish off the build with the Serpent Wrap Rear Grip for improved ADS times.

You’ll find this build great for mobility and ADS speeds while keeping you from appearing on the mini-map when firing — perfect for getting up close and personal.

The nice thing about the PPSh-41 is that it performs well at medium range. It’s still an SMG, after all, so you won’t be able to take out enemies at hundreds of meters away with it, but it’s certainly functional at up to 40 meters or so. To help maximize your range, go with the GRU Suppressor Muzzle, which improves the weapon’s vertical recoil control, bullet velocity, and damage range — along with keeping you from appearing on the enemy’s mini-map.

Follow that up with the 14.9-inch Ranger for added bullet velocity. Then, we recommend an optic since you’ll be using this at longer ranges. You don’t need a ton of zoom, but anything around 1.5x magnification will work. We like the SnapPoint, but go with what you’re comfortable with. After that, apply the Spetsnaz Grip, which improves vertical and horizontal recoil control. This is necessary for staying on your target from afar. Finally, it’s a good idea to have a bit more ammo with this build, so try the Spetsnaz 71 Rnd Drum. The farther away an enemy is, the more ammo you’ll need to secure an elimination.

As you can see, this build is a lot slower than the close-quarters option. Its ADS speeds will be diminished, but that’s OK since you’ll primarily be using this at medium range.

In Warzone, you should be as prepared as possible for all types of firefights — not just those that occur up close or far away. For a more balanced build, we advise prioritizing damage range, recoil control, and ADS speeds. Start once again by using the GRU Suppressor for the reasons mentioned above. This will make your weapon effective at medium range. Then, apply the 15.7-inch Task Force Barrel, which improves the weapon’s effective damage range, bullet velocity, and strafe speed. These first two attachments are meant to prioritize range.

Then, go with the Raider Stock for improved ADS firing move speed, aim walking movement speed, and sprint to fire time. This will help you win gunfights up close. After that, we recommend the Spetsnaz Grip Underbarrel for improved vertical and horizontal recoil control. This will keep you steady for those medium-range battles. Finally, we always advise having at least the 55 Rnd Drum equipped. In this case, the 55 Rnd Drum will work since it doesn’t penalize your movement speed as much as the 71 Rnd Drum.

This is the most practical build, which works well up close and even up to around 30 meters or so. It’s an effective loadout to use as sniper support.