HomeNewsDisgaea bursts onto the mobile stage with gacha mechanics and an attitude!
News

Disgaea bursts onto the mobile stage with gacha mechanics and an attitude! 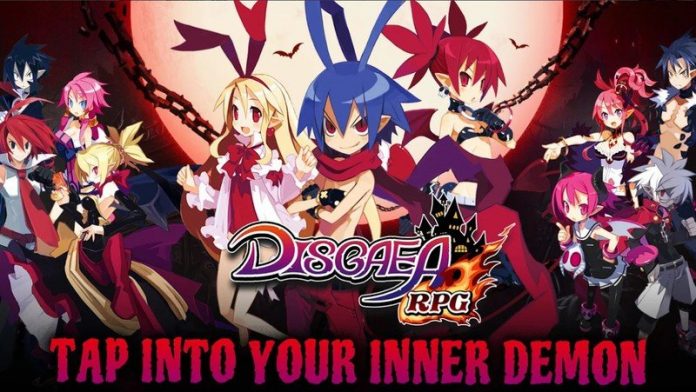 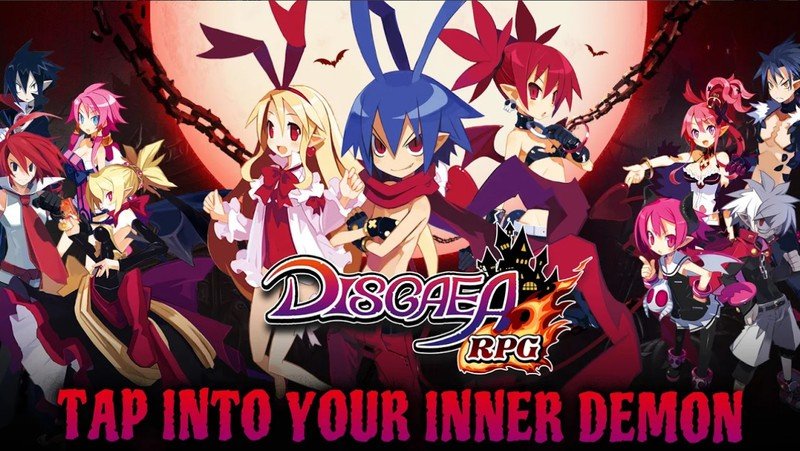 After more than two years of being available in Japan, Disgaea RPG brings the over-the-top charm of its series to western mobile audiences at long last.

Disgaea RPG has finally arrived in the west after first debuting in Japan over two years ago. A mobile gacha spinoff of the core Disgaea series, Disgaea RPG features its own story while still remaining true to the style and vibe the main games are known for. Characters that long-time players will already know and love account for a big chunk of the character lists, bringing their patented charm and humor to Disgaea RPG (we’ll call it DRPG for short from here on out). It’s our Android Game of the Week, and may turn out to be among the Best Android Games.

For the uninitiated, Disgaea is traditionally a tactical turn-based RPG dating all the way back to 2003. Developed by Nippon Ichi Software, Disgaea makes itself unforgettable in the RPG scene by way of its Netherworld setting, its main characters being maniacal, villainous anti-heroes, and its over-the-top and complex combat.

Disgaea RPG, developed by Boltrend Games for the western release, departs from its roots in a few ways, one of which is the shift in gameplay. Now an active-time turn-based RPG, Disgaea RPG forgoes the traditional grid-based strategy combat in favor of your party of 5 battling their way through waves of enemies. It also adds in a few brand new characters to flesh out an extensive roster and avoid simply re-hashing plots from past games. 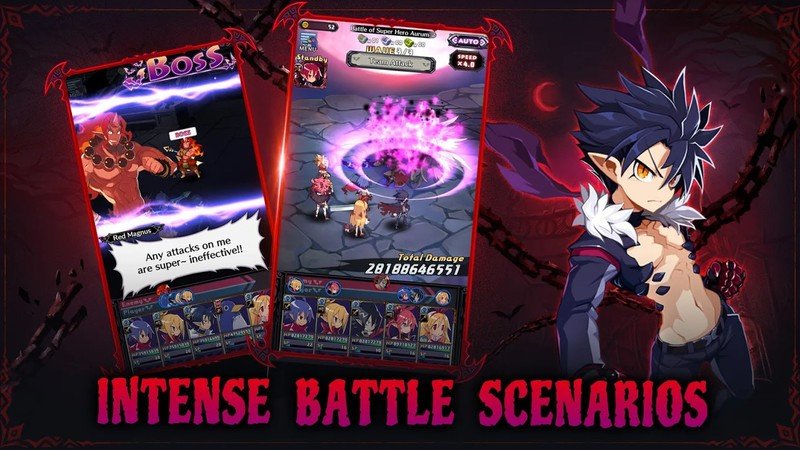 That being said, two of the most established characters from the series, Etna and Flonne, will act as your guides in Disgaea RPG. You play as yourself, a nameless, faceless human who has been summoned to the Netherworld and tasked with training up a demon powerful enough to become the next Overlord. To that end, you’ll be recruiting the demonic cream of the crop to your evil cause and leading them down the long road to Netherworld domination.

The art design and soundtrack are both fantastic, but I’ll give you fair warning now that Disgaea RPG throws a lot at you. Visually speaking, the UI is pretty crowded and can feel overwhelming if you don’t know what everything is and what it does. Don’t panic though, the tutorials are decent and you can pick up the gist of the game very quickly.

Here’s the deal—using standard gacha mechanics (think loot-boxes if you’re not familiar with gacha), you’ll pull characters with a variety of rarities, types, and stats to form your pool of playable folks. The game automatically starts you off with a guaranteed “good” character, so it’s hard to go wrong in the beginning stages. For those who are wondering, Laharl, Valvatorez, and Desco are currently among the S-rank tier lists, so if you pull one of these at the start, make sure you stick with them! Once you’ve got your “main” character, you’ll pad out the rest of your party of 5 with lower-level scrubs like clerics, prinnies, and basic demonic fare. 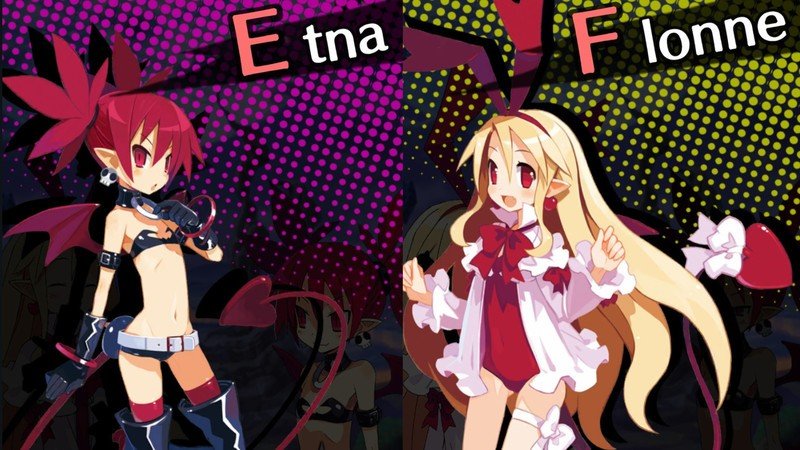 Once you’ve got a workable party ready to go, you’re ready to move on to the game! Disgaea RPG includes 7 different game modes, but the main story mode will best help you get your sea legs. Story mode has 3 difficulty levels, easy, normal, and hard and it starts you out on easy automatically. You’ll most likely feel very overpowered at this early stage of the game, but doing massive amounts of damage is part of the appeal of Disgaea, so that’s just par for the course.

Story mode shifts back and forth between hilarious cut-scenes centered on the main cast and battles. In battle, combat takes place in waves and features elements from past titles like special, team, and tower attacks. Combat is not difficult to grasp and you can even opt to turn on Auto-mode for combat (and even amp up the speed of battle to x4) if you don’t want to manage battles yourself. This may feel a little too braindead for many players, but it’s a great feature for serious grind sessions. 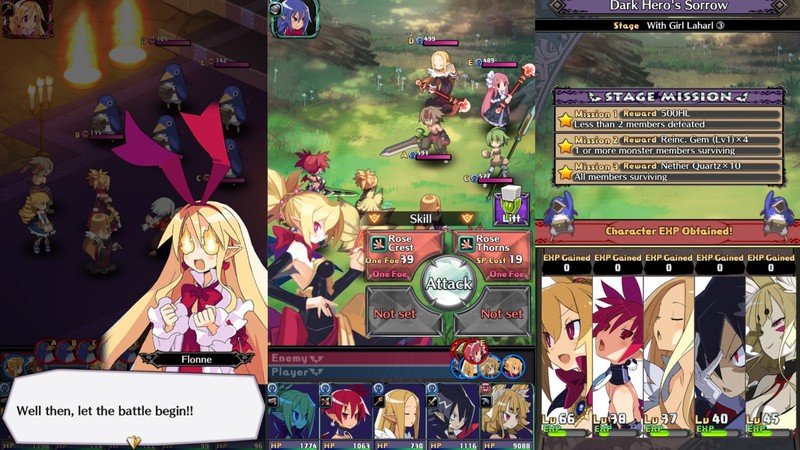 Some of the more fun elements and depth in Disgaea RPG come from the party management aspects. Between encounters, you’ll travel back to your Stronghold to manage your team. You can purchase items, claim rewards, summon new characters, and equip your party with weapons, armor, and abilities to make them extra-lethal. Characters and character types have fortes in weapon classes, differing stats, and abilities that you’ll have a lot of fun balancing as you craft your perfect dream team.

And for those of you who may be new and want to learn more about Disgaea, Disgaea RPG has included a helpful Netherworld History mode, which allows you to experience the highlights from past games and get to know the lore and cast much better.

With 7 different game modes, you’ll have no shortage of storylines to explore and characters to fall in love with

Of course, we do need to talk about Disgaea RPG’s gacha mechanics and how they manifest as microtransactions. Disgaea RPG features two main currency types: nether crystals and paid nether crystals. Why wouldn’t they name the paid version something else? Don’t ask me, but I sure do wish they had, because having two currencies share the same name kind of sucks. Standard nether crystals are your free currency and you can earn these in-game just by playing and completing challenges. 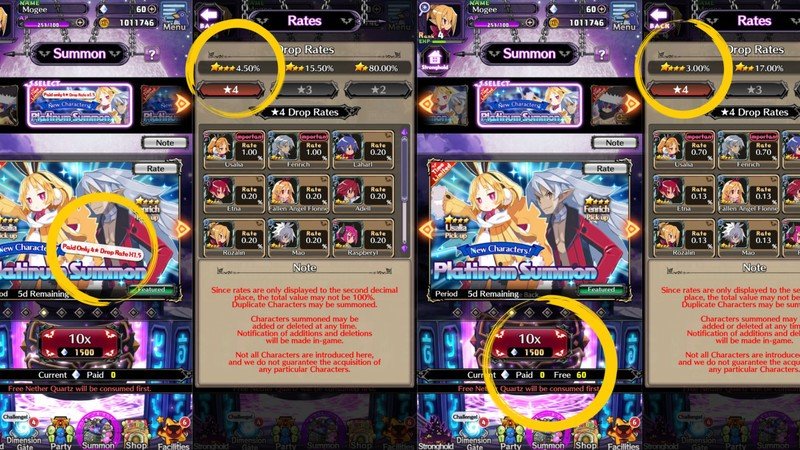 The inherent function of gacha games can be predatory, but after spending quite a bit of time with Disgaea RPG, I haven’t yet felt the need to purchase paid nether crystals. This may start to matter in the late game though, so I’m hesitant to fully comment on this particular facet now. Overall, I would say that the game does an okay job of giving you opportunities to earn enough free nether crystals to still get a few good pulls now and then, even if you have to save up for a little while in between pulls.

There are two different currencies, a free version and paid version that gives better rates for rare drops.

In short, Disgaea RPG is a raucous good time with a colorful, quirky cast, super cute aesthetic, and decently fun gameplay. The microtransactions and gacha mechanics aren’t great, but if you’re already accustomed to this style of gaming (lookin’ at you, Genshin Impact) then you probably won’t find anything too amiss here. Considering that it’s free-to-play, you may just want to pick this new release up and give it a shot!

Check it out, dood 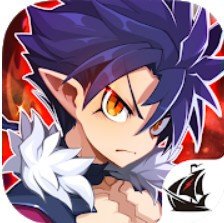 Who will YOU choose to raise up to the coveted status of Overlord?

Disgaea RPG is a turn-based gacha experience packed with character, laughs, and an interesting combat system that will keep you coming back for more.

The best ad blockers for the iPhone