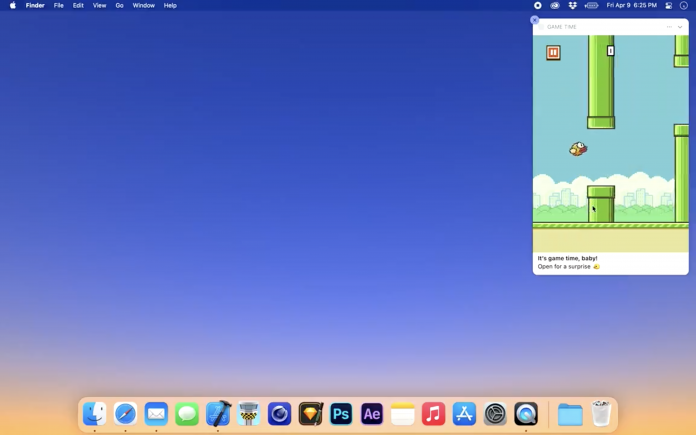 The ultra-popular game Flappy Bird, removed from the App Store in 2014, may be making a comeback in the form of an interactive macOS notification.

Did you know you can put a whole game inside of a push notification pic.twitter.com/LlMx2AjvHH

For those unfamiliar with Flappy Bird, the game consists of guiding a bird through as many pipes as possible without hitting them. The bird, named Farby, moves up with every tap, and users must ensure that Farby doesn’t hit any obstacles along the way, or else the game ends.

The app grew immensely popular in 2014, even at one point generating $50,000/day thanks to in-app ads. Despite its removal from the App Store, a number of games to this day continue to be made and played with inspiration from Flappy Bird. You can learn more about Sardesai’s interactive notification version of Flappy Bird on Twitter.Related Roundup: macOS Big Sur
This article, “Developer Recreates Flappy Bird as Interactive macOS Notification” first appeared on MacRumors.com