Home Reviews Microsoft Surface Earbuds review: Unique, but not much beneath the surface
Reviews

Microsoft Surface Earbuds review: Unique, but not much beneath the surface 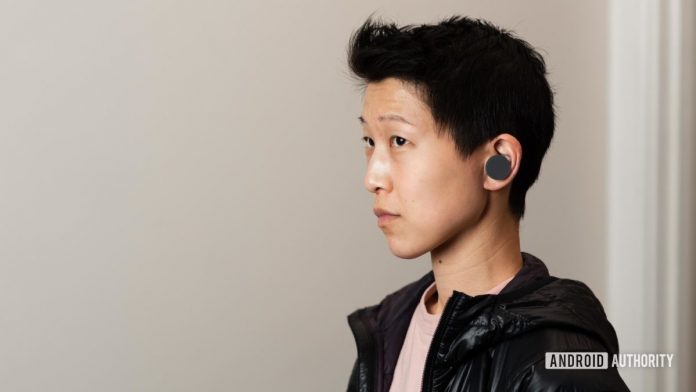 Who should get the Microsoft Surface Earbuds?

What’s it like to use the Microsoft Surface Earbuds? 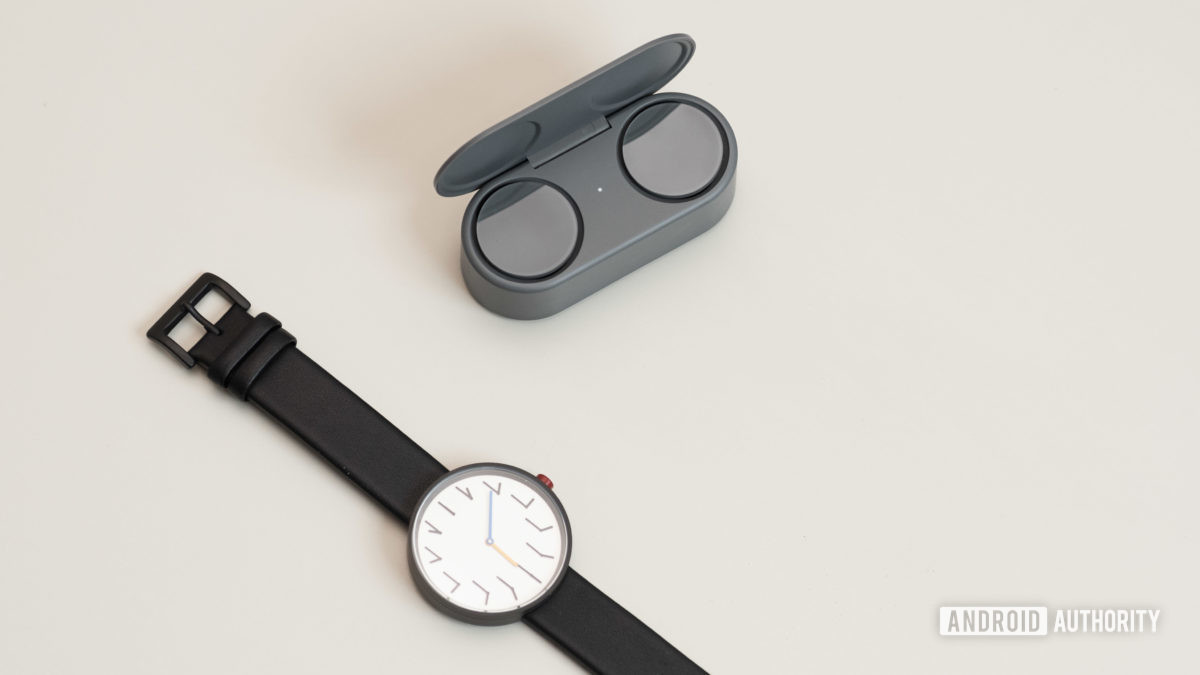 The Surface Earbuds are easy to use, and the circular panels are more than just for show. You can apply a handful of taps and swipes to them in order to control your media and answer calls. Each panel provides plenty of area for your fingers, and the sensors register imprecise touches accurately.

Rather than using a static open-fit design, Microsoft includes three pairs of ear tips that don’t seal to the ear. Nearly all other true wireless earbuds with this design fail to sit securely in the ear because they either don’t include any kind of wing tip or it’s not substantial enough. These earbuds are extremely comfortable, and give the Bose QuietComfort Earbuds and Sport Earbuds a run for their money.

The stout case matches the color of the earbuds, and has a single Bluetooth pairing button on the bottom panel. When you open the thin lid, a lone LED communicates the case’s remaining battery. When the light glows white, there’s ample battery left and when it’s red, you need to find the included USB-C cable to charge it. A magnet keeps the case shut, but its force isn’t very strong. If you drop the case, the lid will open and the earbuds will eject.

Microsoft didn’t engineer any kind of divot for you to slot your fingernail into when removing the earbuds. Anyone with larger hands may have trouble removing the perfectly flush earphones from the case.

Should you get the Microsoft Surface Audio app? 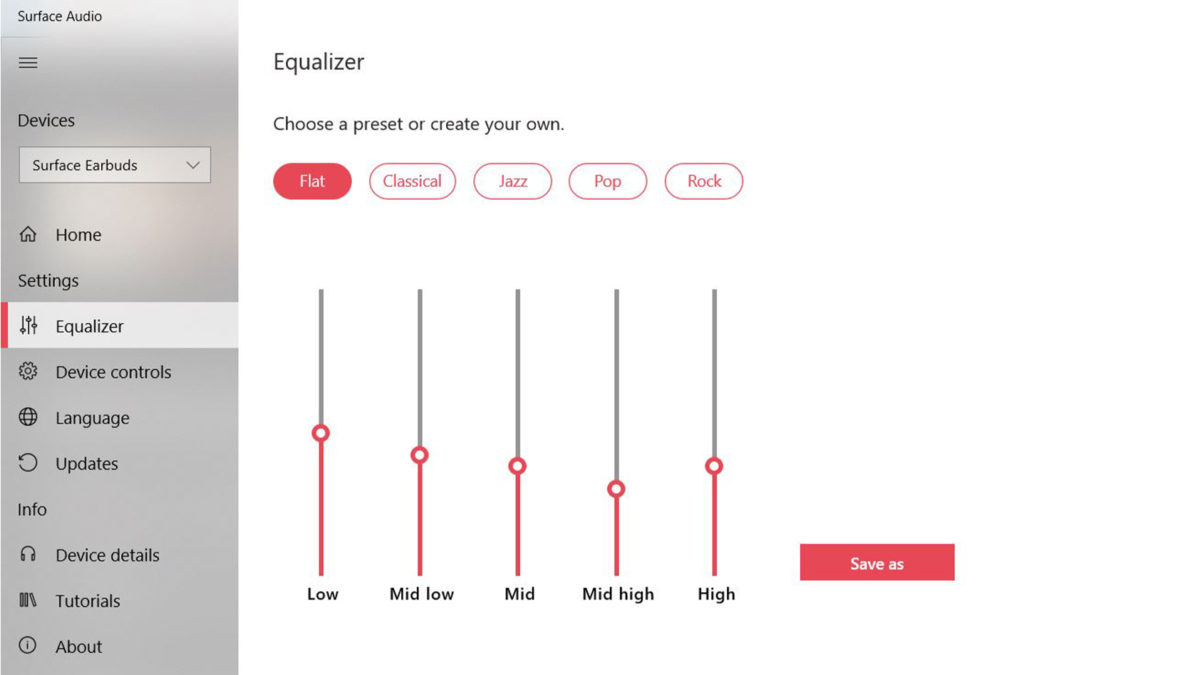 The Microsoft Surface app is sparse on features, but it includes the necessities. You can update the Surface Earbuds firmware, equalize the sound, and toggle aptX streaming, but it doesn’t offer much more. If you use the Windows desktop app, you have a few more options such as Microsoft 365 integration settings and updating the case’s firmware.

You can use the Surface Earbuds as a microphone to dictate documents and emails through various Microsoft applications like Outlook. This is a nice feature if you spend much of your day bouncing from one productivity app to another, as its transcription is quite accurate. Microsoft 365 integration also enables things like real-time captions during a PowerPoint presentation. Oddly enough, iOS is the only system that can support email playback in the mobile Outlook app; this is akin to how Apple’s voicemail transcription service works. Connection stability is reliable whether you use the Surface Earbuds in an apartment or at a park, which can’t be said for all true wireless headsets. The earbuds use Bluetooth 5.0 firmware and support two Bluetooth codecs: SBC and aptX. As with any high-quality codec, streaming over aptX eats away at battery life faster than the default SBC option.

Learn more: Bluetooth codecs 101: Everything you need to know

Microsoft made a surprising move when it chose to omit Bluetooth multipoint from these earbuds. You can’t connect to two devices at once, something the noise-cancelling Microsoft Surface Headphones 2 can perform. In order to switch devices, you need to manually disconnect the Surface Earbuds from the current device before connecting them to the desired device. It takes just a moment, but feels outdated especially for earbuds of this price.

If you have a Surface or Windows 10 PC, you can use Swift Pair which really just hastens the initial pairing process. Similarly, any device running Android 9 or later supports Fast Pair for the Surface Earbuds.

Do the earbuds support mono mode? 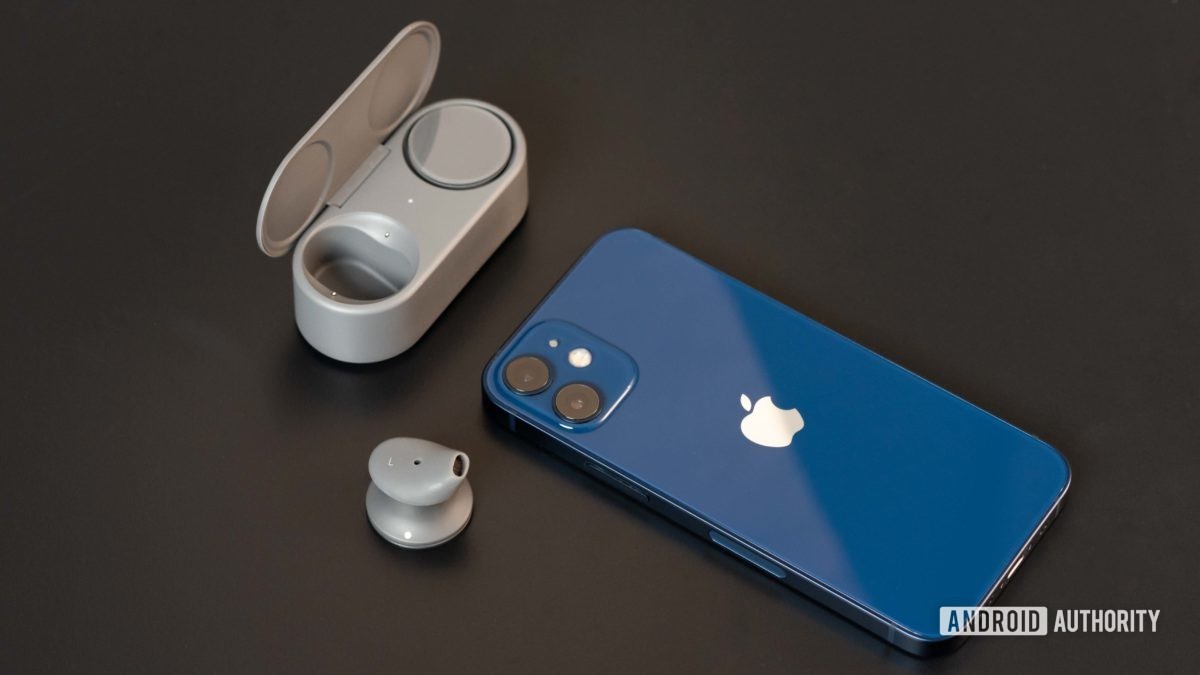 Technically you can use the Microsoft Surface Earbuds in mono mode, but it’s not a true mono mode since you need the right earbud to be nearby (even if it’s in the case). This quirk is pretty frustrating. You should be able to use either earbud in full mono mode without taking the other with you for a ride in your pocket.

How long does the battery last?

According to Microsoft the earbuds last seven hours on a single charge when you stream over SBC at 40% volume, which is well above average. Our battery tests are ongoing and we’ll update this review when the results are in. Even if real-world tests yield five- or six-hour playtimes, that’s still above average for the technology.

No matter how you stream your music — be it over aptX or SBC — you should remember that true wireless earbud batteries aren’t built to last. Unless you’re actively using the earbuds they’re always in the case, which speeds up the battery degradation process. You’ve probably noticed this with your smartphone after you’ve had it for a few years: it just doesn’t hold a charge like it used to. The same thing happens to your true wireless earbuds, but at a much faster rate since the battery cells are so small.

How do the Microsoft Surface Earbuds sound?

For a pair of earbuds that don’t seal to your ear canals, the Surface Earbuds sound quite good and reproduce accurate audio across the frequency range. 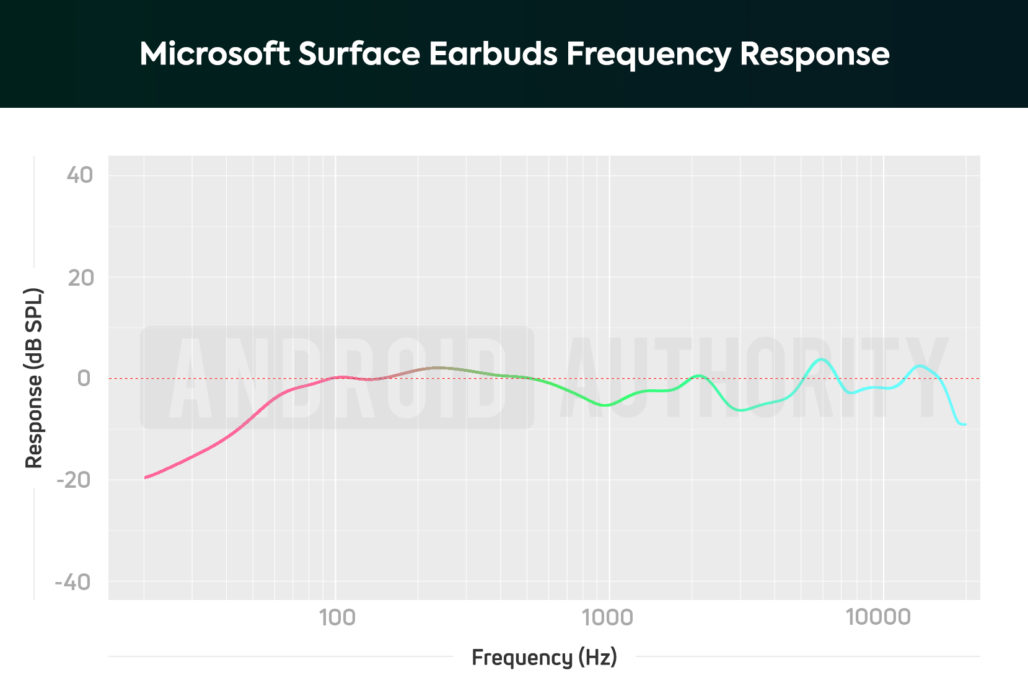 The charts above depict the frequency response under ideal conditions, which you’re unlikely to experience constantly in the real world. Even when we use the earbuds in an ideal environment, the sub-bass response is lacking, so bassheads be warned. The 13.6mm dynamic drivers do a great job of reproducing vocals clearly. So long as you keep your expectations tempered, you’ll enjoy how the Surface Earbuds reproduce nearly all genres of music. 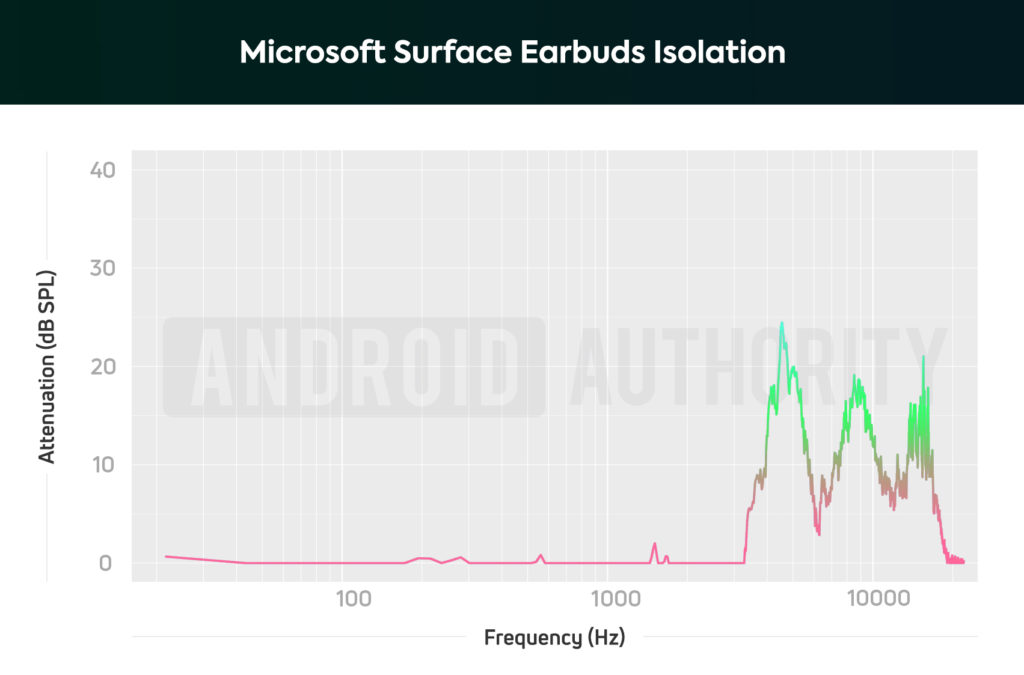 Isolation is all but non-existent with the Surface Earbuds, and while this is bad news for sound quality, it’s a nice safety feature for anyone who lives in an urban area or likes to exercise outside. The open-type fit lets you hear both your music and the world around you, making auditory masking inevitable; this phenomenon is when a loud sound makes it hard to hear a relatively quiet sound. Put simply, bass notes will be hard to hear and feel because your brain is simultaneously processing external auditory information.

Are the Microsoft Surface Earbuds good for phone calls? 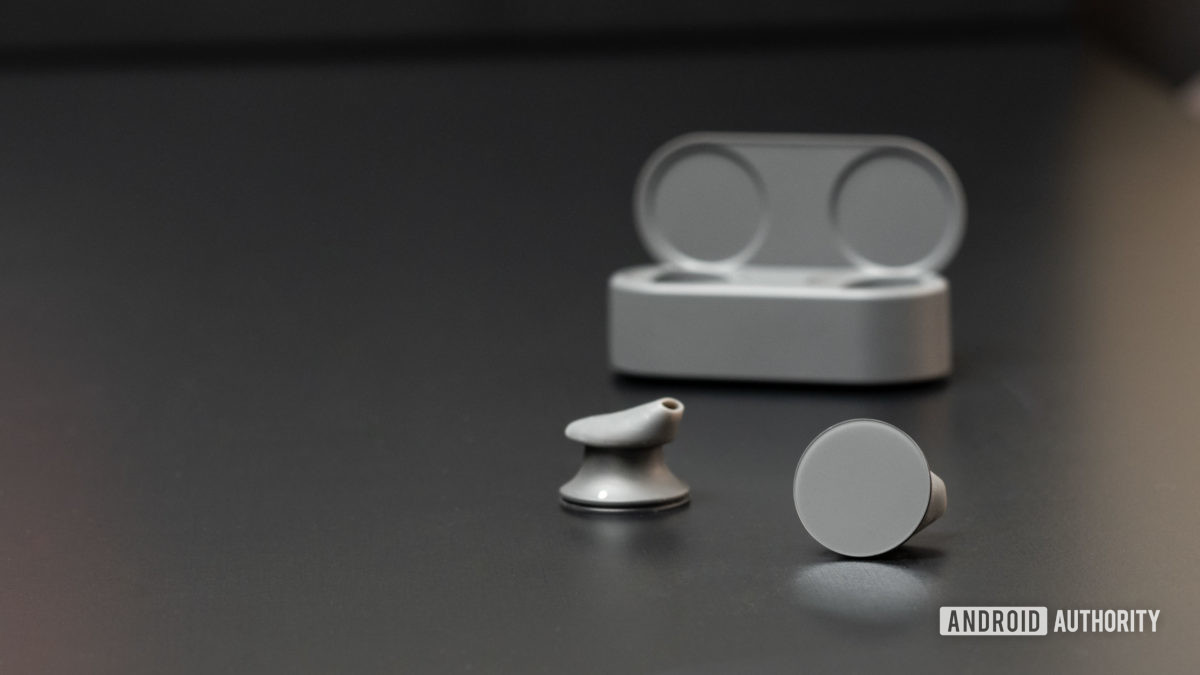 Microphone quality is just okay with these earbuds. They transmit vocals well enough for a quick call, but the performance isn’t much better than any pair of earbuds that cost half the price. Don’t take our word for it, check the sample below. 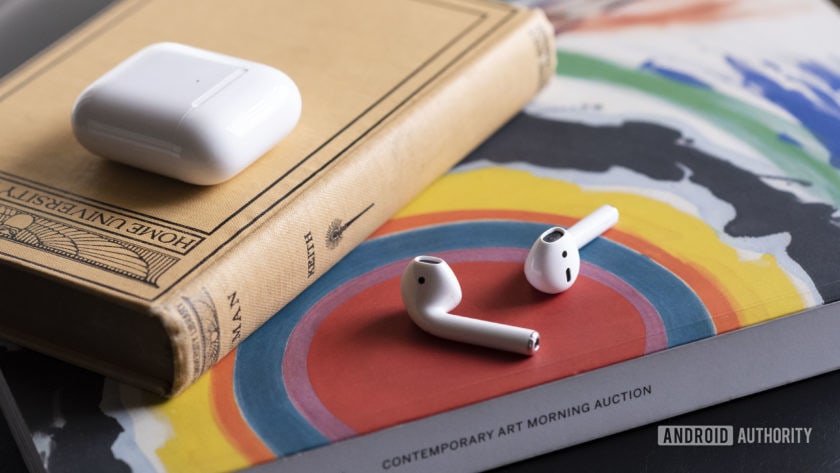 Microsoft and Apple take vastly different approaches to the open-fit design, and Microsoft comes out on top with its removable ear tips. Apple’s hard earbud casing balances on your ear with little security, unlike the Surface Earbuds which are bound to fit a greater range of ear types.

Microsoft’s true wireless earphones are more durable than the Apple AirPods too, and merit an IPX4 rating. Apple’s earbuds lack any kind of official water-resistance, which isn’t great if you plan to exercise with them. Another benefit of the Surface Earbuds is that the case uses the universal USB-C input, while Apple uses a Lightning input. Though, Apple has a leg up when it comes to wireless charging, which is available for an extra fee. Microsoft’s case doesn’t support wireless charging, and you don’t have the option to upgrade.

Neither headset sounds particularly great out in the real world, again because of auditory masking. If you had to choose a pair of earbuds based solely on sound quality, get the Surface Earbuds. You can use Microsoft’s five-band EQ module to customize the sound. If you own an iPhone, just save for the AirPods Pro instead of the AirPods. 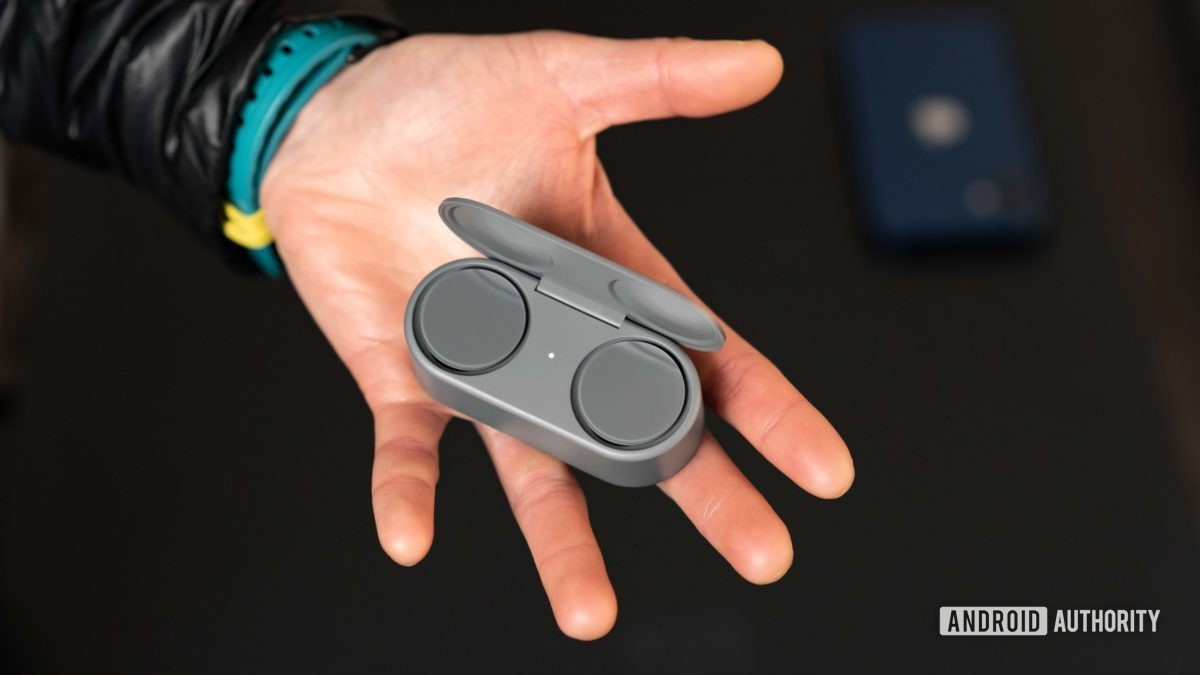 The Microsoft Surface Earbuds design won’t please everyone, but if you like to make a statement, these are the buds to get.

These earphones separate themselves from the rest of the open-type pack, because they actually stay in place no matter what you do. The compact charging case is easy to pocket and wears the minimalistic design well. If you have money to toss around, and want to try a unique pair of earbuds, go for these. Then again, if you want to put your money to something with more features, better sound quality, and a better mic system, there are plenty of competitively priced options.

Microsoft’s true wireless earbuds catch the eye, making them a great option for anyone who wants to make a statement. They support aptX Bluetooth streaming and boast a long battery life.

What should you get instead?

For about the same price as the Surface Earbuds, you can get the Samsung Galaxy Buds Pro which features noise-cancelling, a great microphone system, 360 Audio (Samsung Galaxy devices only), and more. The Galaxy Buds Pro are even more durable than Microsoft’s earbuds and sport an IPX7 rating, so they can be submerged for brief stints without damage. You can freely use either Samsung earbud in mono mode, and you can remap the controls through the Android Galaxy Wearable app. Another great option is the Sennheiser CX 400BT, which includes a USB-C case and handsome earbuds with customizable controls. The sound quality is very good and nearly identical to the pricier, noise-cancelling Sennheiser Momentum True Wireless 2. Unfortunately, the CX 400BT earbuds don’t have an IP rating, so you might not want to exercise with them.

Microsoft Surface Earbuds review: Unique, but not much beneath the surface