How to get the boomerang in Link’s Awakening 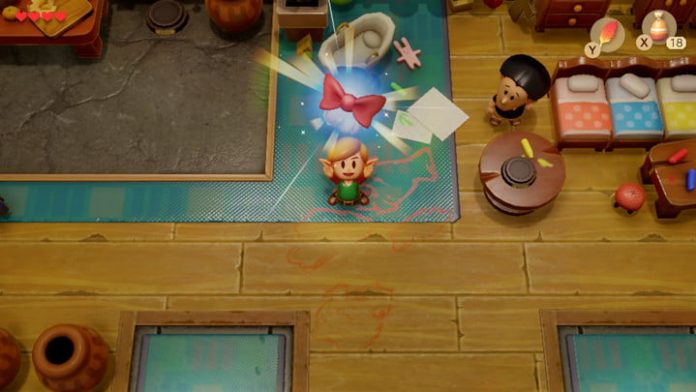 The Legend of Zelda: Link’s Awakening was the first game in the series to have a trading sequence. Acquire a sought-after item, trade it to someone in need on Koholint Island, and receive an item in return to trade with someone else. Like the Ocarina, other Zelda games have featured trading sequences, but Link’s Awakening‘s sequence is the longest, with a total of 13 trades. Completing it is the only way to get the Magnifying Lens, which helps with navigating the final dungeon and is required to get the boomerang. Let’s break down this series of trades so you can get your hands on that boomerang as fast as possible.

How to complete the trading sequence

Mamasha gives you the ribbon in exchange. Go to the house in the center of Mabe Village where BowWow the Chain Chomp hangs out. Enter the right room and talk to CiaoCiao. She wants the ribbon as an accessory.

3. Give Sale the Dog Food

CiaoCiao hands over a can of dog food. Head down to Toronbo Shores, go right, and enter the beach hut. If you see a monkey in a tree, you went a tad too far. Inside the hut, you’ll meet Sale, an alligator who sells bananas. He wants the Dog Food for his collection (in his belly), and you have no use for it anyway.

4. Give Kiki the Bananas

Sale will give you a bundle of bananas for the Dog Food. Now you need to head over to Kanalet Castle. This is actually part of the story. With the draw bridge raised, you have to find another way in. Head right, and you’ll find Kiki the monkey. If you give Kiki the bananas, he will summon his pals to create a makeshift bridge for you to cross.

5. Give Tarin the Stick

After the bridge is constructed, you will get a leftover stick. From there, you need to go to Ukuku Prairie. If you haven’t found the Slime Key yet (grants access to Key Cavern), you need to do that first. Tarin will be standing in the prairie near a tree with a honeycomb sticking out. Talk to Tarin to give him the stick.

6. Give Chef Bear the Honeycomb

7. Bring the Pineapple to Papahl

In return, Chef Bear will give you the pineapple. Now you need to head to the Tal Tal Mountain Range. Climb the mountain, going through the series of caves. Eventually, you’ll see an exhausted Papahl. He’s a long way from Mabe Village, and he’s really hungry. Hand over the pineapple.

8. Give the hibiscus to Christine

Papahl will graciously give you the hibiscus in return. We have to go back to the Animal Village now. Enter the house second from the right at the northernmost edge of Animal Village. Christine’s favorite flower is the hibiscus. Make her day.

9. Deliver the Letter to Mr. Write

Christine will ask you to deliver a letter to Mr. Write. His house is located just north of the Mysterious Forest in the upper-left-hand corner of Koholint Island. Mr. Write is happy to hear from Christine and will even show you the included picture, which is, naturally, Princess Peach.

10. Give Grandma Yahoo a new Broom

For your delivery skills, Mr. Write will give you a broom. You have no use for it, but Grandma Yahoo really needs a new broom. Head back to the Animal Village once again. Grandma Yahoo is trying to sweep outside of the house in the upper-right hand corner. It’s not going well, so please give her a new broom.

11. Bring the Fisherman the Fishing Hook

Grandma Yahoo is so thrilled with her new broom that she gives you a fishing hook. This next part can be tricky. You need to go to Martha’s Bay. Swim right of Catfish’s Maw and around the bend toward the small bridge to the south. Once you’re at the bridge, dive to enter a hidden side-scrolling screen. Swim over to the boat and hop on.

The Fisherman will be extremely happy to know you have a fishing hook. In return, he’ll give you the Mermaid’s Necklace, which he caught instead of fish.

13. Bring the Mermaid’s Scale to the statue

The Mermaid is wading in the water just north of Catfish’s Maw. She lost her necklace. Give it back, and she’ll let you take one of her scales.

Get the Magnifying Lens

After securing the Mermaid’s Scale, you can approach the mermaid statue just south of Catfish’s Maw. The statue will move, revealing a staircase. Head inside the cave and claim the Magnifying Lens.

The Magnifying Lens’ main purpose is to give you the power to read a book in the library that you couldn’t see before. The book tells you the path you have to take after entering the Wind Fish’s egg.

Since the Wind Fish’s egg follows the same rules as the Lost Woods in Ocarina of Time, knowing the path is certainly helpful, especially since it can be one of four possible paths.

Now that you have the Magnifying Lens, it’s time to get the boomerang. Head to Toronbo Shores. On the beach, just south of Sale’s house, is a crumbling wall that can be bombed. Bomb it, and a cave entrance will open up.

If you don’t have the Magnifying Lens, you won’t be able to see Goriya. If you do, you can speak with him, and he’ll ask if you want to trade an item for the boomerang. He will take any item except for Bombs, Magic Powder, the Bow, and the Power Bracelet (you’ll need this for the color dungeon).

Unlike the original or Link’s Awakening DX, it doesn’t really matter which item you choose to trade. After the trade is complete, speak with Goriya again, and he’ll let you buy back your item for 300 rupees. This eliminates the back-and-forth trading that you had to do in earlier versions of Link’s Awakening.