Home How to Genshin Impact: How to start and complete the Tainqiu Treasure Trail quest
How to

Genshin Impact: How to start and complete the Tainqiu Treasure Trail quest 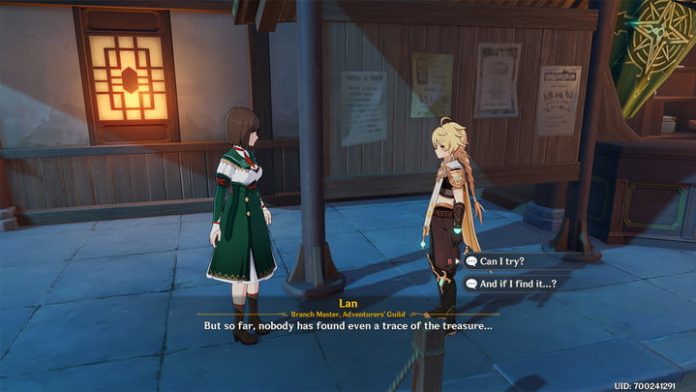 Genshin Impact 1.3 introduces a new weekly activity to the game — the Parametric Transformer. The chunky device is a gadget that, once per week, can turn a large number of extra materials into a random assortment of others. It’s a great way to turn a stack of low-quality goods into things you might actually have a use for. Don’t need Cracked Masks? Toss them in, and you might just end up with the Worn Arrows your squad desperately needs for an upgrade. So how do you unlock the Parametric Transformer? By going on a treasure hunt, of course.

The Parametric Transformer is a reward for completing the new Tianqiu Treasure Trail quest. It’s not the longest quest out there, but it will have you scratching your head if you’re not too great at reading treasure maps.

To get started, head on over to the Tainqui Treasure Trail quest location right beside the Adventurer’s Guild board in Liyue Harbor. Click through the text, and you’ll be on your way to dig up some treasure. Teleport to the waypoint on the mountain, just to the east of Dunyu Ruins, and drop down just a little farther to the east. Defeat a couple of monsters, and you’ll find the treasure map.

Take a look at it through your inventory screen, and you’ll see a faint red circle with an even more faint cross toward the top of the depicted area. Deeper into the Dunyu Ruins is where you want to be. Head on over there and conduct your search.

Without properly examining the map, it can be hard to gauge where to look. When you’re on the subject of long-lost treasure, you’d expect the treasure — or at least additional clues — to be hidden in the various ruins and other dilapidated buildings scattered around the area. Instead, you’ll find your next clue in a tiny abandoned camp to the northwest, just along the path with the patrolling Fatui Agent.

Approach the area, and Paimon will let you know that there’s bound to be something nearby, shrinking the circle on your map around the vicinity of the camp. To find the clue she’s talking about, just walk back along the path, and you’ll notice a small arrow on the fallen pillar behind a bush. The clue reads:

A giant tree, flourishing and lush. Within, it holds a precious stash.
Right in the middle, follow the road. Seek, and the riches shall be bestowed.
With so many steps in climb for good measure, descend and you shall find the hidden treasure.

At first, it’s easy to read the above and assume you’re looking for treasure beneath a tree at the bottom of a staircase in the middle of the road. It’s easy to imagine such a place existing in the mountains of Liyue. But no, it turns out that the single treasure is, in fact, three separate ones. Three chests await, and they’ll all now marked on the map.

Head to each of the three locations marked, and the final chest will have a simple cardboard box within. Take the box back to Lan at the Liyue Adventure’s Guide, and you’ll unlock the Parametric Transformer.

How to use the Parametric Transformer

Once you’ve settled on what to throw in, you need to attack the machine with elemental skills and bursts, so just keep cycling between your characters until the meter hits 100. Once complete, interact with the Parametric Transformer again to reap the mostly-random rewards.

There’s no confirmation just yet of how it calculates and distributes its rewards, but it likely spits out goods of various rarities that equal the value of what you put in rather than the exact amount of materials you deposited, and it’s a good way to diversify your materials.