Home News With iMobie's PhoneTrans, device migration is as simple as one click
News

With iMobie’s PhoneTrans, device migration is as simple as one click 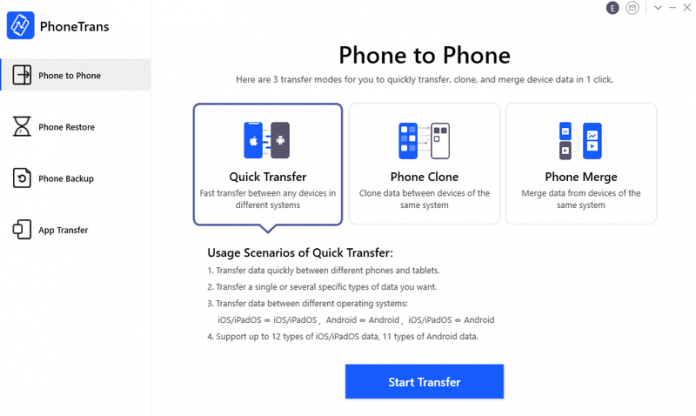 To its credit, Google has done a lot to make migrating from one Android device to another a relatively painless process. All you need to do is sign into your Google account, connect the devices to one another, and start the transfer. Easy, right?

Unless you don’t have or want a Google Account. Or you’re planning to switch operating systems. Or you’re using software like WhatsApp, Viber, or LINE.

But you grit your teeth and suffer through it. After all, what’s the alternative? Is there even an alternative?

There is, actually. It’s called PhoneTrans. And if you aren’t using it already, you should be. 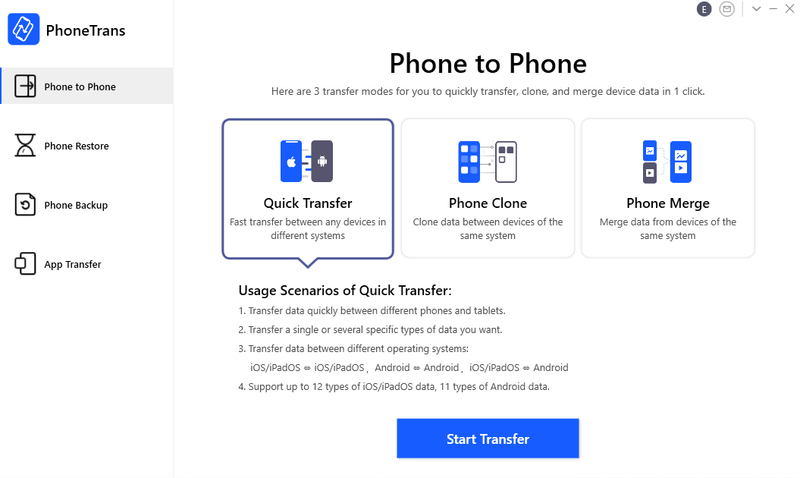 Developed by mobile data management, recovery, and repair specialist iMobie, PhoneTrans is a flexible, powerful, and — most importantly — intuitive way to migrate and backup your smartphone data. With support for up to 11 types of data on Android and 24 types of data on iOS, it lets you skip all the frustrating drudgery and get everything migrated and configured as quickly as possible. It provides you with several options depending on your specific needs.

With Quick Transfer, you’ve some control over what you migrate and what you leave on your old device. Once you’ve connected both your old smartphone and your new smartphone to your desktop, the process is relatively straightforward. Set the transfer direction, decide which data you want to transfer, and then initiate the process.

The data will then be migrated from your old device to the new one. 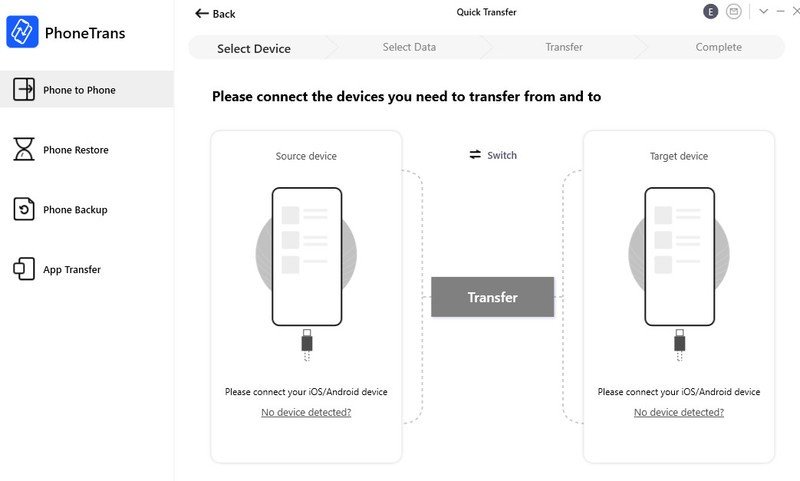 Phone Clone is considerably faster than quick transfer, though there are a few caveats. First, it doesn’t support cross-platform migration. If you want to move from Android to iOS or vice-versa, you won’t be able to do so through this feature. Secondly, it deletes the data on your old device once the migration is complete. 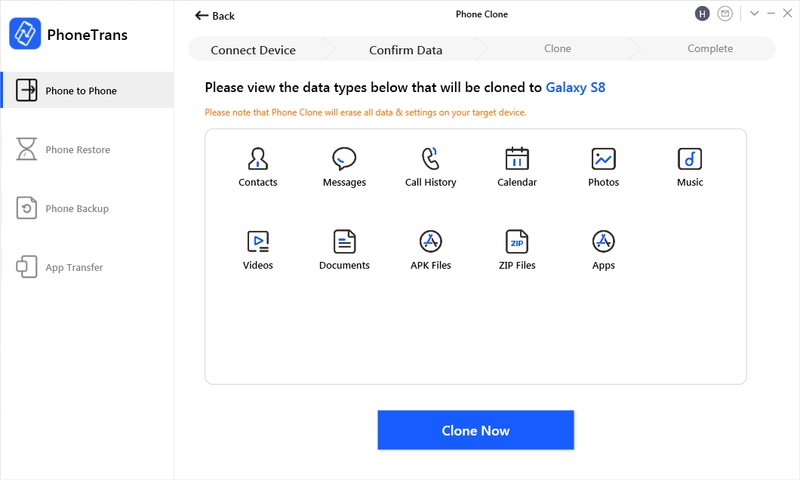 That’s pretty great if you want to give your old smartphone/tablet to a friend or loved one. Less so if you intend to keep using it. Still, it’s the simplest transfer method available to you, requiring only a single click once everything’s connected.

Lastly, if you want to copy data from one phone to another but keep your original device as-is, Phone Merge can do that for you. It works in basically the same way as Phone Transfer, except that you can’t merge different operating systems. 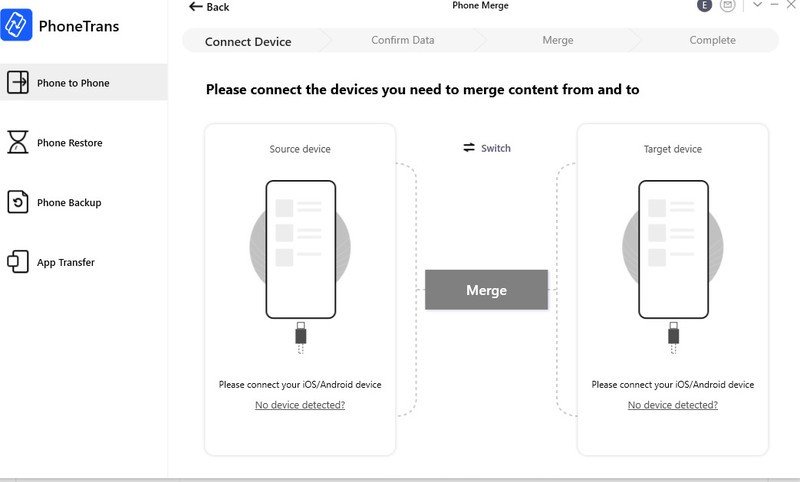 In addition to its file transfer functionality, you can also use PhoneTrans as a backup utility for your devices. You’ll see two options under the Phone Backup tab, selective and full. They’re pretty much what’s written on the tin.

Unfortunately, the latter option is only available to iOS users at the moment

Once your data is safely stored on iMobie’s servers, you can restore it to either an existing or new device at any time. As you can see below, PhoneTrans supports multiple backup and restoration options. You don’t even have to use the app’s own backup system — you’ve the freedom to restore things from your Google account or iCloud. 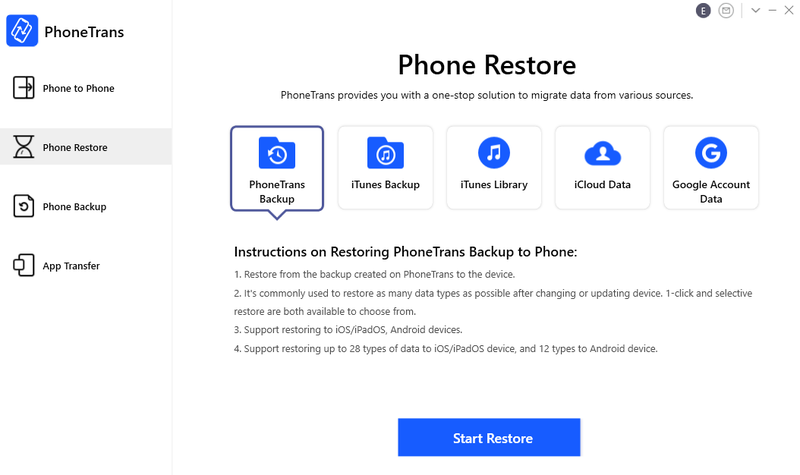 Last but not least, we’ve got App Transfer. Here, you’ll be able to migrate your WhatsApp pictures, contacts, history, and files from one device to another. Note that both devices must be running the same operating system.

Note also that data transfer for LINE, Viber, and general apps currently only work on iOS. Great news if you’re planning to ditch your Android for an iPhone. Not so great if you plan to hang on to your droid. 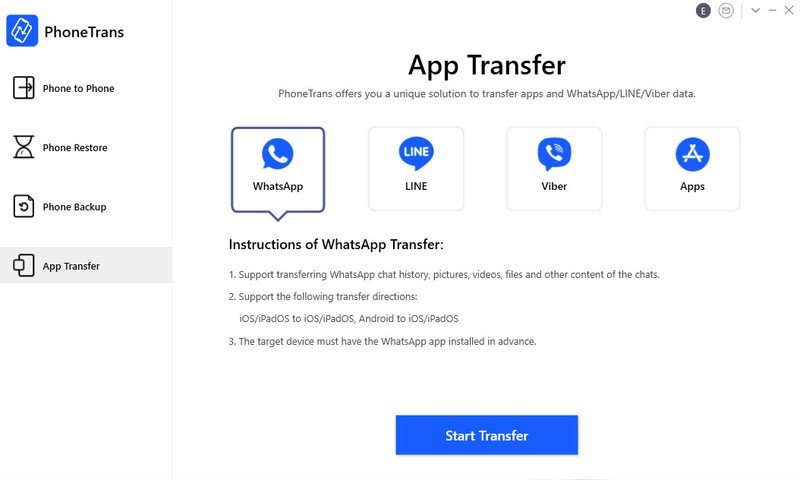 As you may have surmised at this point, PhoneTrans, though an incredibly powerful tool, is geared more towards Apple than Google. While it’s still an incredibly convenient and feature-rich tool on Android, you won’t be getting the full experience. Still, we’d say it’s worth buying, especially since you can currently get a lifetime subscription for just $60.

Now, we obviously can’t leave Android users high and dry. And neither did iMobie. They’ve developed a sort of sister app to PhoneTrans, a tool called AnyDroid, currently available for 25% off an annual license (and 30% off a lifetime one).

Getting a new phone should be an exciting, delightful experience, not a slog through endless menus as you try to get everything from your old device onto the new one. In that regard, iMobie delivers. Both its transfer apps are a joy to use, so streamlined and intuitive that you’ll likely come to wonder how you ever went without them. 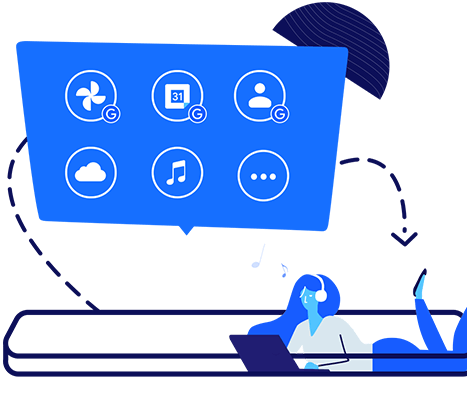 Starting at $30 via iMobie

Migrate to any device

iMobie offers intuitive, hassle-free app and data transfer for pretty much every smartphone, though some of its more advanced features are only available on iOS. 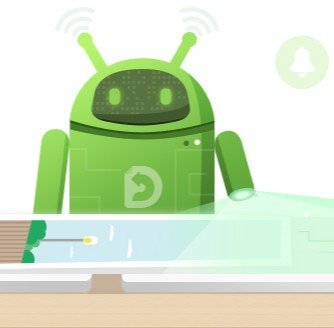 Starting at $40 via iMobie

AnyDroid provides much of the same functionality as iMobie, and it’s designed specifically with Android devices in mind.

Facebook
Twitter
Pinterest
WhatsApp
Previous articleThese are the best Samsung Galaxy S21 cases you can buy
Next articleHitman 3, Scott Pilgrim, and more release for PS4 and PS5 in January