Home How to The best BOTW recipes
How to 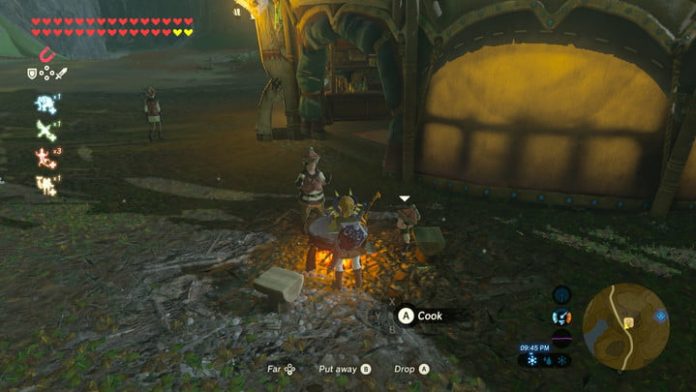 One of the major components in The Legend of Zelda: Breath of the Wild is cooking. Combining the right ingredients can not only give you a leg up against tough enemies, but can also keep you safe in certain weather conditions, or even boost your stamina to make it easier to reach certain locations. However you use cooking, you’re encouraged to experiment with combining ingredients found around the world of Hyrule. There are dozens and dozens of recipes to choose from — most of which give you some kind of benefit.

But which recipes are the best? In this list, we’ll show you the 10 best recipes, along with what makes them so great, and the locations of their ingredients. These are the best BOTW recipes.

How to cook recipes in Breath of the Wild

Before actually getting to the list of recipes, you should be aware of how to cook them. As with many mechanics in Breath of the Wild, the game doesn’t necessarily do a great job of explaining how to cook and combine materials.

To start, you’ll need a pot, which are found around the world, usually at main hubs like Kakariko Village or by stables. Our go-to is always the pot at Outskirt Stable, but you can use whichever you like. To cook items in the pot, you’ll need to first ensure that the pot is lit with a fire underneath. You can light it with a fire arrow, or by using a torch. Remember, if it’s raining outside, you won’t be able to light the pot (so sleep and come back later if this is the case). Once the pot is lit, go into your Inventory and into the Materials submenu.

Here, you’ll be able to hold up to five items by pressing X on them. After you’ve selected the items you’d like to hold, exit the Inventory and walk up to the pot. If the pot is lit, it’ll allow you to press A to cook. And that’s all there is to it!

Many recipes will give you temporary buffs, but keep in mind that buffs do not stack with one another, so it’s best to just consume one at a time. It’s also a good idea to add more of a certain ingredient to a recipe to increase its effectiveness. For example, when making the Hearty Fried Wild Greens recipe, use four Hearty Radishes instead of three to gain extra health (three will still work, but it won’t be as effective as using four). As you play, we recommend picking up everything you come across, as you’ll likely come across useful ingredients for recipes.

Unless noted otherwise, the ingredients below can typically be found in multiple locations and often spawn randomly. If you aren’t having luck finding them in one spot, try another.

“Restores your health and temporarily increases your maximum hearts. A basic vegetable dish made by sautéing fresh wild plants.”

There are less powerful versions of this recipe that can be made with fewer Hearty Radishes, but if you use four, you’ll gain 17 additional temporary hearts. This is a great meal to keep in your back pocket for those sticky situations — whether you’re up against a boss or Lynel.

“Restores and overfills your Stamina Wheel. This meat dish has been wrapped in fragrant leaves and steamed to preserve its moisture.”

Use this dish to gain 10 hearts and an entire additional temporary Stamina Wheel — perfect for climbing tall structures or swimming for long distances.

“Instantly refills some of your Stamina Wheel. A filling dish made by cooking fresh seafood and meat together.”

You’ll want to use this one to replenish your stamina and health. This particular dish grants you five hearts and three Stamina Wheels.

Want to explore some of the hotter areas of Hyrule? Use this recipe to gain six hearts and medium heat resistance for over 10 minutes.

Use this recipe when exploring areas that have a high degree of electricity. The Electro Meat and Mushroom Skewer will grant you high-level electricity resistance for over 10 minutes — great for those sections with lots of rain and lightning.

“Grants a high-level haste effect, which boosts your movement speed while running, swimming, or climbing.”

This elixir is excellent for those in a hurry. Use the Hasty Elixir for a high-level speed boost for over five minutes — which will help you out when traversing the world more quickly.

“Grants a high-level stealth boost. This meat dish has been wrapped in fragrant leaves and steamed to preserve its moisture.”

Use this recipe to grant 10 hearts and a high-level sneak boost for over eight minutes! This is great for getting around enemies undetected.

“Grants a high-level attack-power boost. Meat and seafood simmered in monster extract. A savory dish despite its ingredients.”

Consume the Mighty Monster Stew to gain nine hearts and high-level attack-power boost for 10 minutes. Use this when facing off against bosses, Lynels, or other formidable foes.

“Grants a high-level defense boost. A simple dish made by rolling a whole fish in natural rock salt before grilling it.”

Cook and consume this dish for eight hearts and a high-level defense boost for over four minutes. You’ll want to use this when facing off against powerful enemies that deal high damage.