Home How to Fortnite challenge guide: Shake down an IO guard
How to 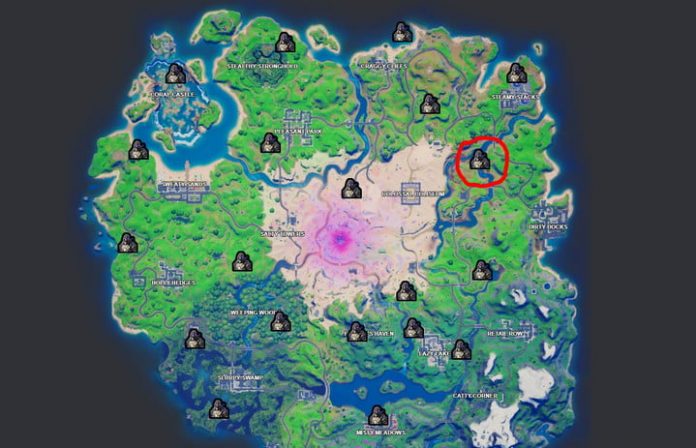 One of the first challenges you’ll probably go for during Fortnite season 5, week 9 requires you to shake down an IO guard. These are the suited NPCs that usually come in packs and are typically quite deadly. As you’d expect, the game doesn’t specify where to find them, but that’s where we come in.

In this guide, we’ll show you all the locations of the IO guards and give you tips on how to complete the challenge. Here’s how to shake down an IO guard in Fortnite.

Where to find IO guards

The nice thing about this challenge is that IO guards spawn in the same spots each match. That means you won’t have to worry about spending your time searching for them. In the map above (thanks, Fortnite.gg), you can see the locations of all IO guard spawns. As stated above, they almost always spawn in groups, so you’ll want to be cautious when attempting to complete this challenge.

For the purposes of this guide, we’ll be covering how to shake down an IO guard at the location circled on the map above. It’s found to the northeast of Colossal Coliseum by a river. But remember, any of the spots above will work.

How to shake down an IO guard

The main idea with this one is to land close to the IO guards and grab a weapon and any other useful gear like shields or grenades before pursuing your target. It will do you no good to land directly on top of the IO guards when you’re unequipped, as they can easily take you down. Once you’re looted up, get close to the guards to get a sense for where they all are.

Specifically when referencing the spot mentioned above, there’s a trailer close to the spawning location of the guards, so use that to get geared up before heading toward your objective. From here, hide behind cover and shoot one of the guards in the head to deal more damage quickly. They won’t engage with you until you start shooting, meaning you can easily line up your shot while you’re undetected. After you’ve downed one on them, you have two options.

You can either take down the other guards to make it easier to shake one of them down, or you can do what we did — and that is to run to the downed IO guard, pick them up, and take them back behind the trailer to complete the challenge. It’s obviously safer to take out the other guards first, but depending on the loot you get and your ammo situation, this might not always be possible.

It also really helps if you have a teammate with you to take down the other guards. Either way, once you’re in position, press Triangle on PlayStation, Y on Xbox, or X on Nintendo Switch while the IO guard is down to perform a shakedown. This will reveal the locations of nearby enemies within a certain radius. Once you do, you’ll earn 20,000 XP for your troubles.