Home How to Fortnite Season 5 week 1 challenge guide: How to complete a bounty
How to

Fortnite Season 5 week 1 challenge guide: How to complete a bounty 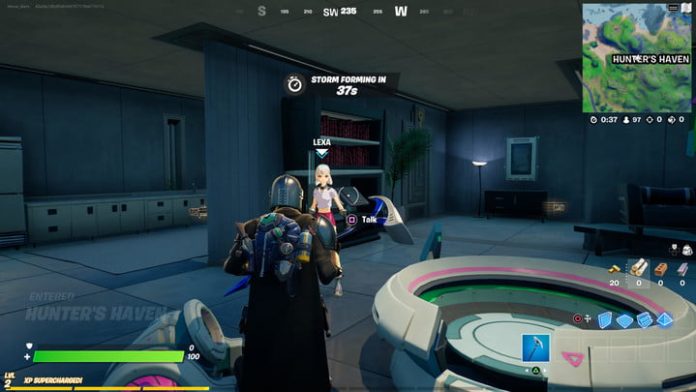 The Mandalorian and Baby Yoda have joined Fortnite as part of chapter 2 season 5, and the latest update comes with a slew of new things to do. One of the new inclusions is the implementation of a bounty system, which works a lot like it does in Call of Duty: Warzone. Fortnite features a new set of challenges that require you to complete these bounties — a fitting addition since The Mandalorian is a bounty hunter and all. As expected, the game doesn’t make it clear how to actually initiate a bounty, though.

Thankfully, we’ve spent quite a bit of time with the latest season and have completed our fair share of bounties. In this guide, we’ll let you in on how to start bounties, how to complete them, and tips for completing the bounty-related challenges as easily as possible. Here’s how to complete bounties in Fortnite.

Initiate bounty by talking to NPC

To start a bounty, you’ll need to talk to an NPC. With the launch of season 5, a slew of map changes has been added. These new named locations are found across the map and feature new NPCs to talk to. There are dozens of them across the map, but from our experience, they seem to spawn in the same locations each match. They’re indicated on the map by a speech bubble, which only appears if you’re close enough to them.

As an example, head to Hunter’s Haven, one of the new locations found to the north of Misty Meadows. Here, you’ll find an NPC named Lexa who is in the northern section of this area in one of the buildings. Talk to her, and then select the option on the left with the crosshairs. Then confirm it by selecting the “thumbs up” icon. This will initiate the bounty and will select a random nearby player for you to target and eliminate.

Keep in mind, you don’t need to talk to this specific NPC to start a bounty. Any one of them will do, but if you’re having trouble finding one, Lexa is fairly easy to get to. There also seems to be a way to start bounties by interacting with a bulletin board as shown below.

We weren’t actually able to initiate a bounty with the board shown above since we were already in the middle of one, but it’ll work the same as if you talk to an NPC. The bounty board in the image above is found to the southwest of Hunter’s Haven by the truck with the logs. Check this out if you’re having trouble getting to Lexa or the other NPCs.

Once the bounty is initiated, a random nearby player will be selected for you to eliminate, and you’ll have six minutes to do so. The game doesn’t specifically tell you where the player is located, but a large yellow circle will appear on the map, indicating the player’s general location. You’ll find that the earlier in the match you begin a bounty, the more difficult it will be to find the player you’re looking for since there will be more opponents in your vicinity (typically). Though, if you take on a bounty early, the player is less likely to be stocked up on late-game weapons, so there are pros and cons to when you start the quest.

One tip to make it easier to find your bounty is to turn on Visualize Sound Effects from the Audio menu in the game’s Settings. This will give you a visual on-screen indicator of any sounds that occur by your character, making it easy to tell if a foe is close. As long as you’re prepared and start shooting first, you’ll likely be able to eliminate the player. Make sure you’re stocked up on health, ammo, shields, and any other equipment that will help you out. We tend to recommend grabbing at least a rare weapon to take out your bounty with, as it’ll ensure you’re dealing enough damage.

In the video above, you can see the entire process in action. Since the match had been underway for less than a minute, the bounty ended up spawning with low-level weapons, meaning we were able to quickly run over to take them out. Luckily, they spawned nearby, but that won’t always be the case. Once they’re defeated, you’ll earn gold bars, which are a form of currency used to upgrade weapons and to hire NPCs to protect you. Plus, you’ll get a boatload of XP if you complete the bounty-related challenges, along with XP for each elimination. In short, bounties are going to change the way you level up, so don’t neglect them!

The other thing we should mention is that you don’t actually have to get the elimination for a bounty to be completed. An enemy can “third-party” your bounty and poach it, meaning they get credit for the elimination, while earning credit for completing the bounty. If you’re a prolific bounty hunter, you’ll find that enemies will poach your bounties often, especially if you initiate one as soon as the match starts. Although this may not be the most fun way to take down bounties, it can be an effective solution if you aren’t confident in your skills.

Challenges aside, going after bounties is a fantastic strategy for coming out on top, as you’ll always know where players are — or at least their general location. Even if you don’t specifically go for the kill, knowing where an enemy is can save your life. The enemy will likely be poached, earning you XP and other goodies. Keep repeating this process for free rewards. In terms of the specific challenge for this week, you’ll need to complete 10 bounties, so make sure you talk to an NPC to start the quest, even if you don’t intend on going for the kill. After a few matches, you’ll complete the challenge with ease, thanks to the poaching mechanic.

Can I File A Lawsuit Against Uber For An Accident?

You can request an Uber vehicle from almost anywhere and at any time. The drivers who drive Uber vehicles are required to...
Read more

Provided you don't need third-party apps, this cheap fitness smartwatch has everything you need to get healthy.While writing my GTS
Read more

Finding decent Android tablet deals isn't so tough anymore, though finding a deal on one of the best tablets can
Read more

Block out the world around you with these ANC wireless earbuds

True wireless earbuds have come a long way in the few short years they've existed, and now with so many
Read more