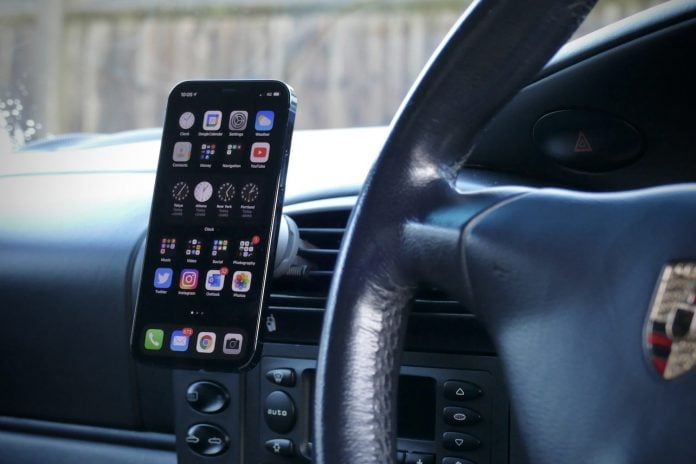 Belkin has made the first MagSafe accessory worth spending money on, the $40 MagSafe Car Vent Mount Pro, and that’s because it simply leans into the technology’s strengths. It’s not a new idea, but it’s neatly implemented and, unlike all other variations, requires absolutely no additional parts to operate.

Not all vents are alike

The MagSafe Car Vent Mount Pro (no, I have no idea what makes it Pro either) is made of plastic. From a distance, it looks a bit like aluminum, which is nice, and it has the MagSafe logo emblazoned on the softer front piece. A ball joint means the main section can be angled and rotated for better viewing, and a slotted, heavy-duty rubber mount keeps it securely attached to an air vent in your car.

Despite having magnets inside, it’s not a heavy piece of kit, and the ball joint has plenty of friction in it, so it stays where you put it. It’s designed specifically to grip onto air vents, and it can be rotated to compensate for the angle of those vents, but don’t expect it to fit in all vehicles. It fit the conventional, flat slatted vents in my Porsche Boxster and my Jaguar XJ8, but not in the circular, recessed vents in my Mini Countryman.

This does mean it’s worth looking at your vents before deciding to purchase one, as there’s a chance it may not fit your car correctly. Once mounted, it angles sufficiently to be easily viewed when driving, but you best get it right as it’s too stiff to adjust when in motion and you need two hands to do so. Provided you set it in the right position, and your vents are constructed in a certain way, it doesn’t flop about either. Overall, it’s one of the better car vent mounts (MagSafe or otherwise) I’ve used.

The big question is, does the MagSafe system have enough strength to hold your phone in place, even when the car is in motion? The answer is yes, it does, but with one caveat — you have to use the iPhone without a case, or with a MagSafe case. It does not seem to have sufficient power to work through other cases. I tried it with a thin hard plastic case made by Caudabe, and it didn’t let through enough magnetic power to stay attached even when the car wasn’t moving.

MagSafe locks the phone into position without any guesswork. There’s an obvious “clunk” when the magnets meet and connect, and because the Car Vent Mount Pro can be rotated, the phone can be set in either portrait or landscape orientation which is helpful. Unlike some other car mounts, the MagSafe system is convenient when your journey is over — you just pull the phone free and go, there’s no messing around with releasing grips. That in itself is worth the money.

This also applies to using the system generally. You don’t need a metal plate stuck to your phone, or hidden behind a case, to make use of the magnetic mount. It’s all built into the phone. This does become a downside if you have found a non-MagSafe case you like, but that problem will lessen over time as more third-party cases integrate MagSafe.

What doesn’t it do?

It doesn’t charge your phone. Despite MagSafe being able to be used for wireless charging, the car mount does not have this function. The rubber vent mount part does have somewhere to wrap a cable around it, so it doesn’t flap around too much, should you wish to plug the phone into a car charger. 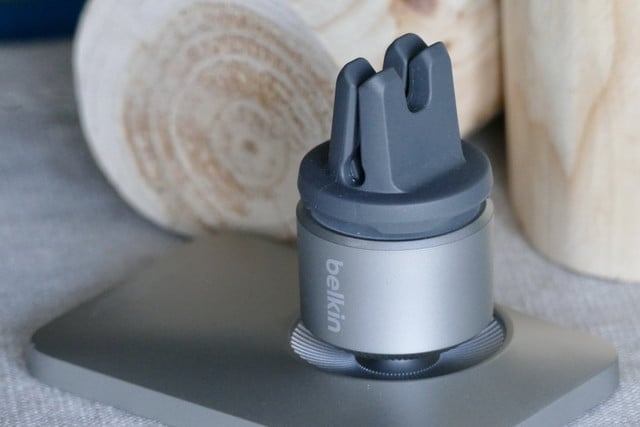 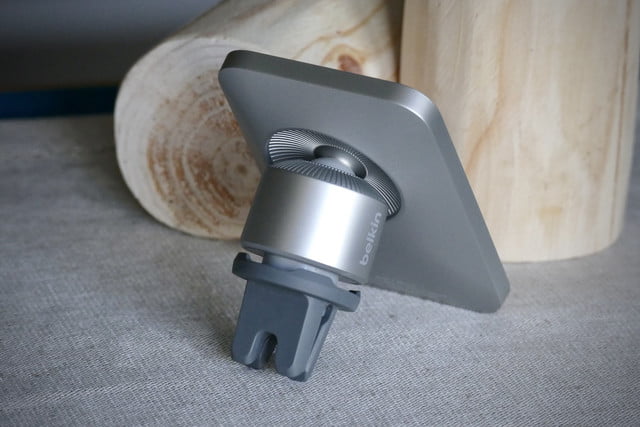 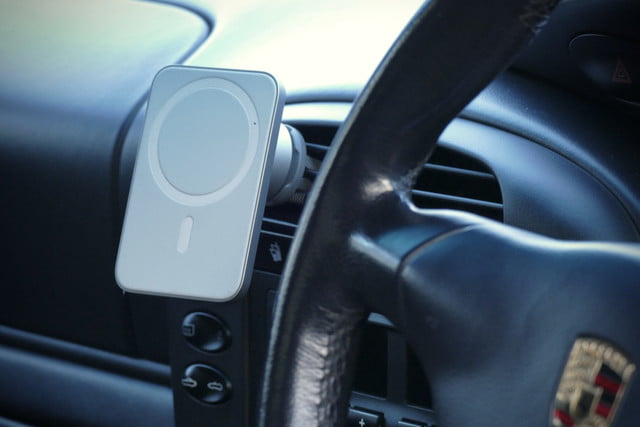 It also doesn’t work with any other phones except the iPhone 12 series, as it works with the magnets built into the phone’s case. I’ve been using it with the iPhone 12 Pro. I tried the MagSafe mount with a metal plate from another magnetic car vent mount system, and while it did magnetically attach, I didn’t have much confidence in its ability to hold on when driving.

The Belkin MagSafe Car Vent Mount Pro costs $40, or 35 British pounds, and is available through Apple’s online store and retail stores. At the time of writing, there is a long wait time when you order, up to eight weeks.

Considering the cost of other MagSafe accessories, this is relatively reasonable, but it’s two or three times what you’d usually pay for a basic car mount without wireless charging. As a result, you should absolutely make sure not only that it fits your car’s vents, but also that you use a compatible case, before purchasing.

Belkin’s MagSafe car mount works really well, and doesn’t try to be something it’s not. There are no superfluous features to increase the price or complexity, it holds on to the phone safely, and doesn’t require extra effort to remove when you’re getting out the car. Again, it’s not reinventing the wheel, and there are many other iPhone car mounts out there, but it is taking a previously slightly awkward but highly effective system and making it more convenient. It means this is the first MagSafe product we can happily recommend.