Home News iPhone 12 vs. iPhone 12 Pro: Which should you buy?
News 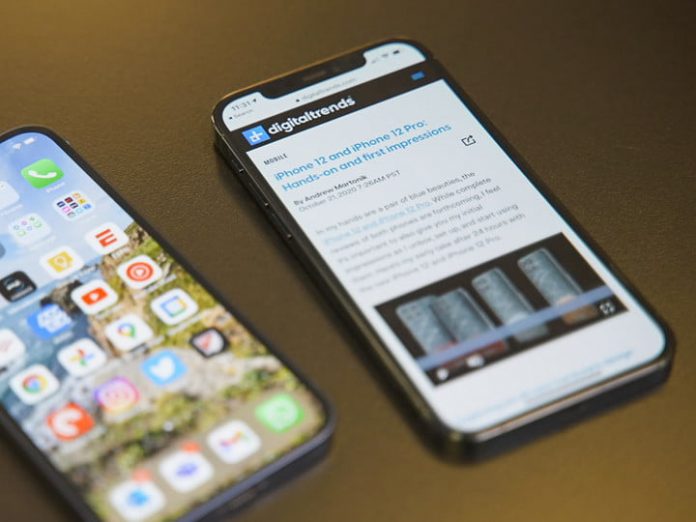 Of these four models, the iPhone 12 and the iPhone 12 Pro are superficially the most alike. They both feature a beautiful 6.1-inch display and almost-identical dimensions, making them very hard to distinguish at first glance. However, there are a number of important differences between the two models, which we take a closer look at in this article. We compare the two smartphones across a number of categories to see which one is the best new iPhone for you — and the better device overall.

Both phones benefit from the same redesign, featuring a smaller notch and smaller bezels, as well as the aforementioned flat sides (as with this year’s iPad Pro). The iPhone 12 Pro is about 30 grams (or nearly one ounce) heavier than the iPhone 12, however, which may mean it’s not quite as comfortable as the lighter model. On the other hand, the lightness of the iPhone 12 undercuts its sophistication a little, making it seems a tad cheap.

Their displays are also all-but identical. They both pack a 6.1-inch Super Retina XDR OLED display, which will provide you with 2532 x 1170 pixels (or 460 pixels per inch). They both look unsurprisingly gorgeous, and even without a 120Hz refresh rate, the inclusion of True Tone technology and a wide color gamut (on both phones) provides a beautifully-rich screen. One small difference is that reports have suggested the iPhone 12 Pro’s typical nits level (which measures brightness) will be a little higher than the iPhone 12’s, although both will have the same maximum level of brightness.

Both phones come with an IP68 rating, which suggests that swimmers and bathers can get away with dipping them in up to 1.5 meters of water for up to 30 minutes. Apple also claims its new Ceramic Guard glass will provide greater protection against falls and damage, boosting the durability of both phones.

All of this is a slightly long-winded way of saying that both phones are almost the same aesthetically. This round is, therefore, a tie.

The iPhone 12 and 12 Pro are both powered by the A14 Bionic chip, which Apple is making some pretty outlandish claims about. Even if it doesn’t “defy the laws of physics,” it’s still a highly-capable processor. It will ensure that the iPhone 12 and 12 Pro will handle the latest apps with ease, as well as any software that makes use of machine learning and other advanced technologies. Nonetheless, there is one important difference between the two models: The iPhone 12 Pro contains 6GB of RAM, while the iPhone 12 has to make do with 4GB. This is likely to result in a noticeable difference in performance, particularly when it comes to newer applications and multitasking.

The iPhone 12 also falls down by having only 64GB of internal memory as standard. The iPhone 12 Pro’s standard model comes with 128GB of storage and can be expanded to 512GB if you want, while the iPhone 12 only goes as far as 256GB. Again, this could make a noticeable difference, particularly if you tend to take plenty of photos and store files on your phone.

As for the battery, both phones come with an identical 2,815mAh cell. This is actually less than the batteries found on the iPhone 11 and 11 Pro, but Apple has done such a good job of tweaking each phone’s hardware and software that you won’t notice any drop in longevity. In fact, both the iPhone 12 and 12 Pro comfortably last a full day under heavy use, although some users might find that they get a little more use out of the iPhone 12, depending on how they use it.

This minor difference aside, it’s clear that the extra RAM and the extra internal memory provides the iPhone 12 Pro with the advantage here.

Nonetheless, the addition of the telephoto lens in the case of the 12 Pro means that it’s a bit more versatile. Its 52mm telephoto lens supports 2x optical zoom, letting you take more detailed zoomed photos, while its main wide lens includes a new seven-element lens for more detailed photos. That said, this lens is also something the iPhone 12 benefits from, with the two phones also boasting improved optical image stabilization (OIS). Both phones are, therefore, likely to provide very satisfying cameras, although the iPhone 12 Pro will be the phone of choice if zoomed shots are important to you.

The iPhone 12 and 12 Pro can both capture 4K video at 60 frames per second, with each now offering a low-light mode for video (as they do with all of their camera lenses). However, because the iPhone 12 Pro does have a telephoto lens, we’re declaring this round as a narrow victory for the more expensive phone.

Yes, you’ve guessed it: The iPhone 12 and 12 Pro run on iOS 14. This is kind of fitting since as with the designs of each phone, iOS 14 provides Apple’s OS with its most meaningful redesign in years. It adds such features as home screen app widgets, while the App Library is also extremely useful. There’s also a nice new Translate app and the ability to activate shortcuts with two taps on the back of your phone.

It’s also safe to say that the iPhone 12 and 12 Pro will receive updates just as speedily and for an equally long period of time. In other words, this round is a tie.

Lateness is fashionable, which can be only the reason why Apple has dragged its heels for so long in bringing 5G support to its phones. Well, all four iPhone 12 models support 5G as standard, just like most Android flagships that have launched over the past year. However, Apple has revealed that the faster mmWave 5G band will be available only on models sold in the United States. This applies to all four iPhone 12 models.

Aside from that possible distinction, the iPhone 12 and 12 Pro boast very similar special features. They both see MagSafe charging (and accessories) come to iPhones, meaning that you can attach wireless chargers and various other paraphernalia simply by bringing it close to the back of your phone. It’s not a massive addition, but it should improve convenience (and safety) when enough third-party manufacturers get around to releasing compatible accessories.

Both phones also come with the now-familiar TrueDepth camera. This lets you unlock your iPhone and pay for items at stores using Face ID. Face ID also enables Animojis and Memojis, which are fun little avatars that can mimic your facial expressions and that can be used during FaceTime calls.

This is a very close round. In fact, it’s so close we’re calling this another tie.

The iPhone 12 starts from $799 for the 64GB version, while the 128GB and 256GB versions will cost you $849 and $949, respectively. It will also be available from every major carrier and the vast majority of major retail outlets, so there may be some decent iPhone deals during the Black Friday sales.

While their core features are pretty much the same, the iPhone 12 Pro wins this head-to-head by virtue of superior performance and a more versatile camera. Its battery life is also basically just as good as the iPhone 12‘s, despite it being a bigger phone.

Having said that, the $200 price difference is quite big, and not everyone will notice the fact the iPhone 12 has 4GB of RAM compared to 6GB. The lack of a telephoto lens may also not be missed by those who aren’t much interested in zoomed photos, especially when the iPhone 12’s camera is already great as it is. As such, the iPhone 12 will prove a great buy for anyone who wants a top-of-the-line smartphone that doesn’t make such a big hole in your wallet.