Home How to Fortnite guide: How to unlock the Daredevil outfit
How to

Fortnite guide: How to unlock the Daredevil outfit 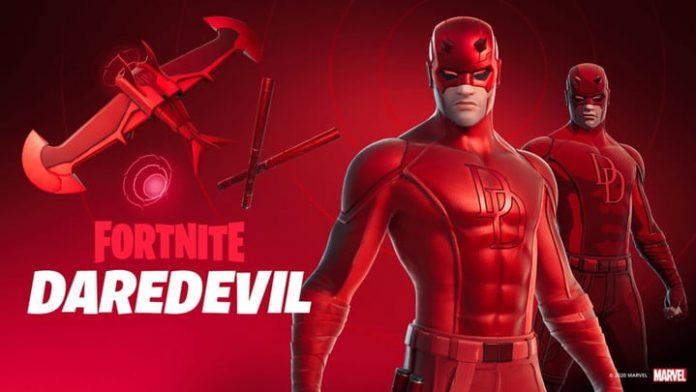 Fortnite’s Marvel-themed season 4 allows you to acquire many of your favorite heroes’ outfits, from Wolverine to Thor and Storm. The game has currently shifted to a Halloween theme as part of a limited-time seasonal event, but you can still earn rewards that pertain to Marvel’s heroes. One outfit you might’ve seen players using this season is Daredevil, though coming across it is a rare sight, as not many players were able to meet the requirements to earn it.

In this guide, we’ll let you know if the Daredevil outfit is still available, how players were able to obtain it, and more. Here’s everything you need to know about Daredevil in Fortnite.

Can you still acquire Daredevil in Fortnite?

In short, the Daredevil outfit is not obtainable anymore, according to Epic Games. We reached out for clarification and an Epic rep said they do not have any information regarding future shop rotation or whether the Daredevil outfit is going to be added. However, this does not rule out the possibility of the hero being added again before the season is over. Right now, Epic is focusing on Fortnite’s new Halloween event, so it’s possible we could see some of the season’s buyable heroes make a return before it ends on November 30.

How players were able to acquire Daredevil

There were two main ways of getting the Daredevil outfit during Fortnite’s season 4. The main way was by competing in the Daredevil Cup, which was available on October 14. The top teams in each region were awarded with the Daredevil skin for free before it launched in the item shop. The qualifying placement required to earn the skin depended on your region. For example, in North America East, you were required to reach within the top 500, while in North America West you needed to have reached the top 200. In addition, the final tournament includes a $1,000,000 prize for the winners. This tournament has since ended, making it impossible to get the skin for free.

The Marvel Knockout Super Series kicks off on Wednesday, October 14 with a Trios cup celebrating the Man Without Fear, Daredevil. Winners will get early access to his Outfit before it hits the Item Shop. Details here: https://t.co/CtROTz2KYh

However, Epic realizes that not many players would be able to get their hands on the skin from competing in the tournament and made the hero available to purchase from the item shop on October 17. There were a few hero bundles, one of which featured the following items for around 2,000 V-bucks:

You were able to buy certain bundles that included various Daredevil-related cosmetics, as well. Currently, if you boot up the store, you’ll find Halloween cosmetics to coincide with the in-game seasonal event, with no sign of Daredevil or other Marvel heroes. Many players are hoping Epic Games will make those heroes available for purchase again before the end of the season. If this happens, we’ll update the article to reflect the change, but currently, there is no way to acquire the Daredevil skin, unfortunately.