HomeNewsHubble captures a spectacular time-lapse of a supernova explosion
News

Hubble captures a spectacular time-lapse of a supernova explosion 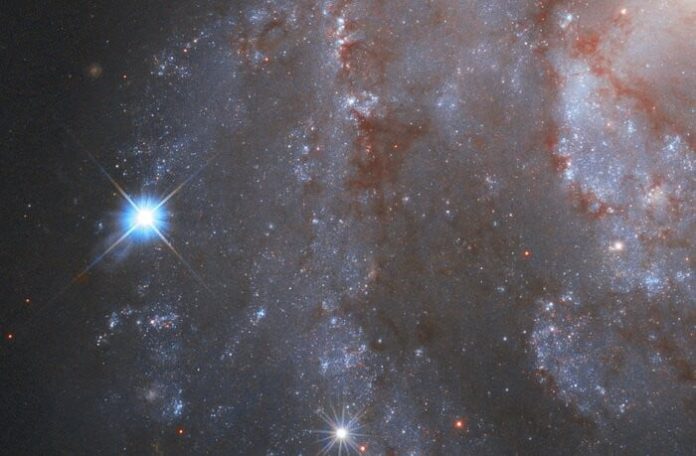 The Hubble Space Telescope has captured a time-lapse of a supernova in the spiral galaxy NGC 2525, showing the epic explosion and aftermath of a white dwarf slurping up material from a companion star and detonating in a thermonuclear blast.

The supernova is called SN2018gv and was first identified in January 2018. The next month, Hubble began observing it, watching as it dimmed over time. The data Hubble recorded was used to create the time-lapse in the video at the top of this page, showing how the brightness changed with time.

“No Earthly fireworks display can compete with this supernova, captured in its fading glory by the Hubble Space Telescope,” said lead researcher and Nobel Laureate Adam Riess of the Space Telescope Science Institute (STScI) and Johns Hopkins University in a statement.

The supernova is also shown in a Hubble image, where it shines brightly in the left part of the frame. It is located 70 million light-years away, in the constellation of Puppis in the southern hemisphere.

Pictured here is part of the captivating galaxy NGC 2525. Located nearly 70 million light-years from Earth, this galaxy is part of the constellation of Puppis in the southern hemisphere. On the left, a brilliant supernova is clearly visible in the image. The supernova is formally known as SN2018gv and was first spotted in mid-January 2018. Supernovae like this one can be used as cosmic tape measures, allowing astronomers to calculate the distance to their galaxies. ESA/Hubble & NASA, A. Riess and the SH0ES team Acknowledgment: Mahdi Zamani

The way in which the brightness of a supernova fades over time is important as Type Ia supernovas, like this one, are used as mile markers in space. The vast majority of Type Ia supernovas give off light of a fixed brightness which fades in a predictable way, meaning astronomers can observe them and calculate how far away they are. These distance measurements can then be used to calculate the expansion of the universe, which has implications for the study of dark energy.

However, recently a Type Ia supernova was discovered which had an unusual brightness curve, increasing in brightness more slowly than others of the same type. The researchers are concerned that supernovae like this unusual one could be contaminating data used to measure the expansion of the universe. To account for this, we need to study more Type Ia supernovas and understand the variations that may be out there.

Facebook
Twitter
Pinterest
WhatsApp
Previous articleWe have the tech to make wildfires less severe. Deploying it is the hard part
Next articleHubble captures a spectacular time-lapse of a supernova explosion
- Advertisment -