Home How to How to get the best horses in The Legend of Zelda: Breath...
How to

How to get the best horses in The Legend of Zelda: Breath of the Wild 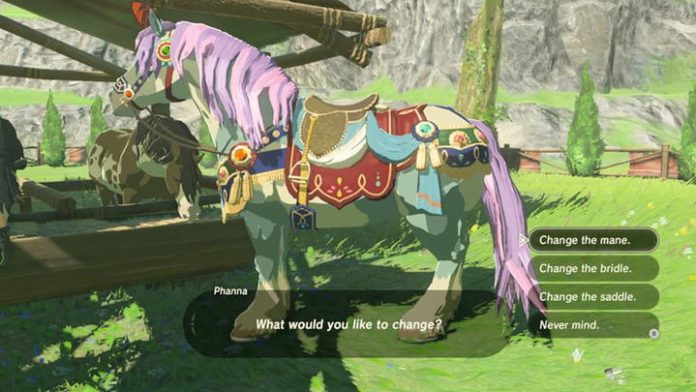 If you played Ocarina of Time in the ‘90s and loved nothing more than riding Epona around Hyrule field as the sun set on Castle Town, you’ll be happy to learn that The Legend of Zelda: Breath of the Wild is the most horse-friendly Zelda game yet. After playing through the game’s preliminary area, you’ve probably learned that already. You might not know, however, about the unique horses just waiting for you to catch, tame, and love them. On top of that, you can ride several mounts that aren’t horses at all — as long as you don’t mind getting up close and personal with some questionable creatures.

So, whether you’re just looking for a friendly equine companion or you’re determined to tame the very Lord of the Mountain itself, use our Legend of Zelda: Breath of the Wild horses guide, and you’ll be riding off into the sunset in no time. Here’s where to find the best horses in Breath of the Wild.

Getting your first mount in Breath of the Wild isn’t exactly the game’s biggest challenge, but it isn’t as easy as you might think. It’s certainly tougher than winning that joke of a horse race back in Ocarina of Time. First, you need to find a horse. If you’re near the beginning of the game, you’ll want to complete the starting section on the plateau first, then head past the two large mountains to the east and arrive at the Dueling Peaks stable. You’ll find wild horses in the plains east of the stable.

When you spot a horse you want, click the left stick to go into sneak mode, creep up behind it, and grab on. Jam on the left shoulder button to soothe it while you try to hang on. Keep in mind that some horses will simply be too wild for you to catch early on. The ones with solid coats, as opposed to spots or mottling, are generally tougher to tame. This will get easier as you increase your stamina, though you can cheat a bit by cooking stamina-boosting foods using ingredients like stamella mushrooms and restless crickets.

Once you’ve tamed your mount, ride it over to the nearest stable and speak to the front desk by holding the left trigger to focus on your target and then pressing A. Choose a super cool name like “Princess” or “Sniffy,” then pay 20 rupees for a saddle and bridle. You can now take your horse out from any stable you find.

There’s a little more work involved, though. New horses don’t like you right away, and as a result won’t listen to your commands. Whenever your horse starts veering off course or moving on its own, use the left stick to gently correct it, then immediately press left bump to soothe. If you see the little sparkles on its neck you’re doing it right. Over time your horse will become accustomed to you (you can check your bond at any stable).

Once your bond is at “max” you can begin to customize your mount. You can alter its mane style and color, as well as its equipped saddle and bridle by speaking with the person tending to the horses at most stables (to the right of where you register new horses).

The mane styles and dye will be unlocked automatically, but bridles and saddles you have to find for yourself. There are a number of ways to get them. You can beat challenges from horse enthusiasts, including a horseback archery mini-game to the west of the Highland Stable in the southern region of Faron, and a gate-jumping challenge at the same stable. Try finding the Fang and Bone shop run by Kilton at the skull-shaped lake in northern Akkala as well.

You might assume otherwise, but your horses actually can die in Breath of the Wild. If you get as attached to them as we do, it will be a great tragedy when one dies. Luckily, there’s a way to drag their horsey souls back across the River Styx if you know whose pockets to line. Those pockets belong to none other than the horse god Malanya, and if you’d rather discover all this for yourself stop reading here.

In southern Faron, there’s a location on the map called “Lake of the Horse God.” Donate 1,000 rupees to the shrine near the lake to revive Malanya, who can bring your dead horses back to life. He’s kind of terrifying and it’s a lot of rupees, but the price is worth it.

You’ll surely fall in love with some of the normal horses you tame on your journey, but if you really want the best of the best you have to look high and low. Or rely on us, since we already did.

The legendary horse Epona will either be the hardest or the easiest horse you get in Breath of the Wild, depending on whether you have the Twilight Link Smash amiibo. The first time you use it, Epona has a 100% chance of spawning — but after that, it’s random. It’s recommended that you be by a stable when attempting to get Epona to spawn using the amiibo. You can continuously use the same amiibo by reloading the save. Otherwise, you can only use amiibo once per day. It’s also been reported that you have a higher chance of getting Epona to respawn through amiibo if you scan a bunch of non-Zelda related amiibo beforehand. We tested this and were able to get Epona to spawn after five or six tries.

The Royal Horse — descended from Princess Zelda’s personal steed from a century ago — can be found on Safula Hill to the west of central Hyrule Field, across the Regencia River. If you can’t find it just by looking around, grab the side quest from Toffa at the Outskirt Stable.

These skeletal horses can occasionally be found with skeletal enemies on their backs at night. A surefire location is the eastern part of North Tabantha Snowfield in Hebra to the northwest. Look near the North Lomei Labyrinth. A woman at the Snowfield Stable will pay you for a picture of one.

This enormous horse — twice the size of a normal steed — can be found holding a horse conference in the Taobab Grassland, south of the starting plateau. A researcher near a campfire to the west of Highland Stable, just across Menoat River, will give you a side quest to bring him the giant horse.

Sand seals are prevalent in the Gerudo region. You’ll need cooling clothes or a heat-resistant elixir or meal to survive there, and you have to sneak up behind the seals to attach a rope to them. One easy method is getting up high then gliding over to them, since they can easily hear your footsteps if you approach by ground.

There are a number of other non-equine animals you can ride, including deer and — awesomely — bears. Try sneaking up on any new animals you come across and see if you get the option to mount them.

The Lord of the Mountain

The Lord of the Mountain is undoubtedly the coolest mount in the game. If you’ve seen any glowing blue rabbits around in the forest, you’ll know what to look for — the Lord looks like them but the size of a horse. It can be found on Satori Mountain at night whenever there’s an aurora borealis-like glow over the peak. Satori Mountain is west of Hyrule Field, near where you find the royal horse. It takes a ton of stamina to tame the Lord, and you can’t keep it — hilariously, the stablehands will drive you off, yelling about “curses.” But it’s worth it just to spend one rainy night galloping infinitely through the plains on the Lord of the Mountain.