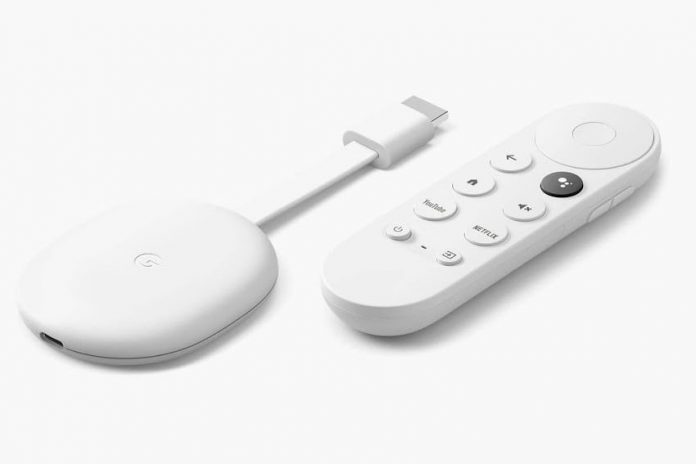 $50 seems to be a magic price in the world of streaming media devices. It’s what Roku charges for a Streaming Stick+, it’s the price that Amazon asks for a Fire TV Stick 4K, and as of today, it’s what Google charges for its new Chromecast with Google TV device.

So if each of these streamers costs the same, how do you decide which one is right for you? With more that unites these gadgets than separates them, the answer will be in the details, so let’s take a deep dive and see where each streamer’s strengths and weaknesses are.

Roku and Amazon use nearly identical HDMI stick designs for their streamers. You get the “stick,” which plugs into an available HDMI port on your TV, a MicroUSB cable for power (which in the Roku’s case also doubles as its wireless transmitter module), a power adapter in case your TV doesn’t have a free USB port, and a voice-enabled remote control.

Google’s Chromecast with Google TV follows a slightly different approach that puts the streamer at the end of a flexible HDMI cable. It’s a tad bulkier than the stick style, but it has two benefits: It’s easier to plug into a TV’s HDMI port in situations where you already have other cables plugged into the other ports (or where a TV is designed such that there’s no physical room to have a stick poking straight out of a port). And because it sits farther away from the TV chassis, which can cause Wi-Fi interference, it might enjoy a stronger wireless connection.

Amazon’s Fire TV Stick 4K comes with an HDMI extender cable to help address both of these issues, but the Roku Streaming Stick+ does not. Roku claims that having its wireless transmitter in the power cable instead of the stick, more than compensates for any wireless concerns. But you may still find it tricky to install it without buying your own HDMI extender.

Ultimately, we don’t think there’s much to recommend one design over another.

Once again, the similarities between these devices are significant. They’re all about the same size and weight, all powered by non-rechargeable batteries, and all possess the following buttons:

But when you look closely, Google appears to have taken a simplified approach to the Chromecast with Google TV’s remote, which doesn’t possess dedicated buttons for:

Both the Roku and Amazon remotes have these buttons, and Roku, which has the most buttons of all three remotes, also throws in four shortcut buttons for specific streaming service apps like Netflix and Disney+, and an instant replay button which zaps you back 20 seconds while watching any video.

Google’s remote can still accomplish the same number of functions (except instant replay) by giving some buttons more than one function. For instance, the central OK button inside the D-pad becomes the play/pause button while watching a video. Likewise for the left and right D-pad buttons, which provide fast forward/rewind.

There’s no question that Google’s approach yields a smaller, simpler remote, but we’re still very partial to Roku’s single-purpose buttons, which make operating the Streaming Stick+ a real no-brainer for most folks.

On the surface, this category should belong to Roku. As the oldest streaming platform, the company has amassed an incredible array of streaming services (which are added to the device as downloadable “channels”) and its channel store contains everything from the biggest names like Netflix and Disney+ to the smallest, micro-targeted offerings from spiritual groups and hobbyists.

It’s also home to the Roku Channel, an excellent resource for free, ad-supported content as well as an easy way to bring in your subscription services into a single interface. Roku’s recent addition of more than 115 free live TV streaming channels makes this even more compelling.

If it were purely about the number of available content sources, Roku wins. But for most people, it’s an 80/20 (or maybe 99/1) rule, where 80% of the streaming content they want to watch comes from 20% of the available channels. Given this, if any big names are not present on a streaming platform, that’s noteworthy.

HBO Max, for instance, still isn’t available on Roku or Amazon Fire TV. NBCUniversal’s Peacock was only added to Roku recently after the two companies settled differences that had been ongoing since Peacock’s launch earlier in 2020, however, it’s still absent from the Fire TV catalog.

Google’s Android TV platform (which the Chromecast uses for content apps) seems to be mostly immune from these kinds of concerns, but in the past, it has been something of an afterthought for developers. For instance, it took years for Hulu to update its Android TV app to make it compatible with Hulu + Live TV.

We’re awarding this one to Roku, on the strength of the size of its channel catalog and its superb Roku Channel. But if the company ends up in more standoffs with content providers that result in the inability of Roku users to stream from big-name services, we’ll revise this section.

Support for audio and video formats

All three streaming devices will support 4K resolution at up to 60 fps. But their support for high dynamic range (HDR) formats and advanced audio formats can differ substantially.

The Roku Streaming Stick+ can support HDR10, and it lets streaming apps passthrough Dolby Atmos. But it can’t offer higher-quality HDR formats like HDR10+ or Dolby Vision, and it doesn’t support HLG. Passthrough support for Atmos is good in that if you have an Atmos-capable TV, soundbar, or A/V receiver, apps can send an audio bitstream to these devices, which will then use that to let you hear Dolby Atmos sound. The problem is that some apps, most notably Netflix, won’t allow Atmos passthrough.

The Fire TV Stick 4K appears to be the winner, with all four flavors of HDR onboard: HDR10, HDR10+, HLG, and Dolby Vision, plus the ability to fully decode Dolby Atmos. But, for reasons we have yet to discover, Netflix also denies the Fire TV Stick 4K access to Dolby Atmos soundtracks, forcing it instead to use Dolby 5.1.

It’s a similar story for Google’s Chromecast with Google TV: Excellent support for HDR formats (HDR10, HDR10+, Dolby Vision) and Dolby Atmos. However, in this case, Dolby Atmos is passthrough-only, just like the Roku.

Given that Dolby Atmos support is similar on all three devices, it comes down to video formats. Technically, the Fire TV Stick 4K should win because it has support for HLG in addition to the other HDR flavors, but we’re not sure that’s enough to declare victory. We’ll fence-sit a bit here and say…

Roku’s search has always been top-notch, and we have no doubt that will continue to the case. But these days, with millions of movies and shows at our fingertips, searching isn’t necessarily the best way to find something to watch.

That’s why both Google TV and Amazon’s new Fire TV interface look like promising improvements for our ability to discover new content. Both offer a curated view of all of your apps, channels, and subscriptions, and Google TV has even integrated YouTube TV (for those who subscribe to that service) to blur the lines between what’s on-demand and what’s live even further.

We’re looking forward to trying them both, but until we do, it looks like it’s once again a tie between Google and Amazon.

There’s a lot going on here, so let’s break it down:

We suspect that as long as you’re not a gamer, Roku’s collection of thoughtful extras make it the winner. But, there’s no denying that Google and Amazon’s integration of both their voice-based assistants and gaming services might make them the better choice for folks who are already invested in one of these ecosystems.

The Fire TV Stick 4K’s optional Ethernet adapter might seal the deal for those with poor Wi-Fi, but that’s probably a small minority these days.

Yeah, this one’s going to be decided by you, not us.

Were you hoping for an easy decision here? Perhaps some fatal flaw that would take at least one of these streaming gadgets off the table?

Unfortunately, that’s not the case this time around, but it’s for the best possible reason: Roku, Amazon, and Google have all created great 4K streaming media devices at a price that most of us will find very affordable.

But we’re not going to leave you stuck with your streaming device decision without a little advice. If advanced HDR formats like Dolby Vision and HDR10+ matter to you, whether because you simply want to make the most of your TV’s abilities, or you’re just a total video nerd, you can take the Roku Streaming Stick+ off your list, at least until Roku releases a new version that has this ability.

At that point, it’s going to be all about Google vs. Amazon. If that’s the case, and you don’t mind waiting a little longer, hold off on your decision until we can publish our in-depth review of the Chromecast with Google TV, and we can try out Amazon’s new Fire TV interface. These reviews will likely help your decision a lot.

But if gaming and advanced HDR don’t put a smile on your face, we think you can’t go wrong with Roku’s Streaming Stick+. It may be the oldest of the three devices, but it’s still a fantastic little streamer with one of the best interfaces we’ve ever used.

Though we didn’t include it in this comparison, it’s worth noting that the TiVo Stream 4K is also $50 and shares tons of attributes with the new Chromecast. It’s powered by Android TV, it has a very good remote control, and it has support for advanced HDR and Dolby Atmos.

If you’re a Sling TV user, it makes even more sense as a streaming device because TiVo has tightly integrated Sling’s live TV streaming channels into the Stream 4K’s main app — which means it’s the Sling equivalent of the YouTube TV integration into the new Chromecast.