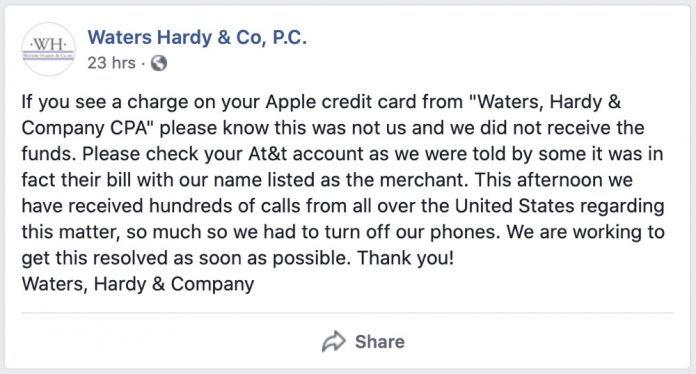 A transaction labeling error with the Apple Card has been causing confusion for some ‌Apple Card‌ owners, with AT&T charges listed as “Waters, Hardy & Co” instead of AT&T on ‌Apple Card‌ statements.

The problem appears to have started at some point yesterday, with tax preparation service Waters, Hardy & Co receiving hundreds of phone calls from confused customers. In a Facebook post, the company said that it had received so many calls from ‌Apple Card‌ owners that its phones had to be turned off.

MacRumors reader Kyle alerted us to the problem. He found an incorrect merchant charge for “Waters, Hardy & Co” listed in the Wallet app, which was actually his bill from AT&T. He contacted the company and received a voice recording with a message that said Apple had incorrectly listed Waters, Hardy & Co as the merchant for the AT&T charges.

MacRumors reader Kyle says that he contacted Apple Support about the problem and was told that the issue was known and was in the process of being corrected. Waters, Hardy & Co. also says that it is working to get the problem resolved as quickly as possible. Tag: Apple Card
This article, “Apple Card Mislabeling AT&T Charges as ‘Waters, Hardy & Co’ Leading to Customer Confusion” first appeared on MacRumors.com