Photoshop will soon allow you to swap out boring skies automatically using A.I. 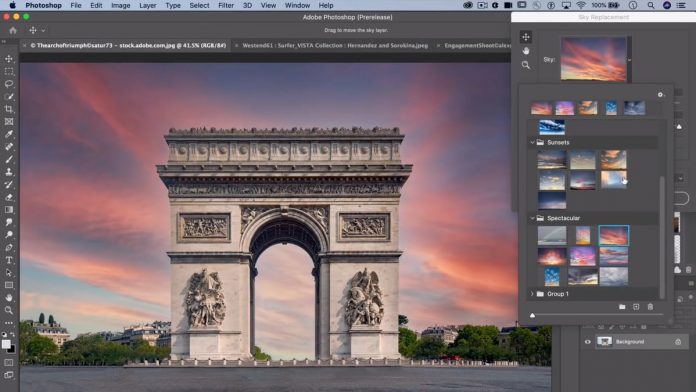 In a teaser video released on Monday, Photoshop shared a sneak-peek into Sky Replacement, an upcoming tool that automatically swaps out the sky for one from a preset or an original sky image. The tool, however, is one of the few times Photoshop hasn’t been first to a feature, as competing photo editor Luminar already has had a similar tool for some time now.

In the video demonstration, choosing the Sky Replacement tool from the edit menu opens up a window designed for the task. A new panel will list included sky presets to use and an add button at the bottom allows photographers to upload their own images of a sky to use instead — since if everyone starts using the same skies in their photos, the pattern of clouds could even start to feel familiar.

Adobe Sensei, Adobe’s A.I. system, reduces the time spent on the traditional method of swapping out a sky in two major ways. First, the A.I. automatically separates the sky from the rest of the image, including cutting out any objects protruding into the sky such as people and architecture.

But Sensei will also work to help prevent the swap from looking like a bad copy-paste job. Sensei uses the tones in the sky image to inform adjustments to the rest of the image. For example, adding a sunset sky will make the rest of the image look like it was actually taken at sunset by adding more warm tones.

Photo editors have some control over the edits, including sliders to adjust the brightness and temperature, as well as adjusting the size and placement of the sky in order to have precise control over how the sky aligns with the rest of the image. Additional sliders help shift and fade the edge of Sensei’s automatic masking.

Importantly, Adobe says the new tool will be non-destructive, with the changes preserved in layers so editors can go back and tweak them later. That will also allow photographers to apply changes outside of what Sensei determines, such as further tweaking the tone of the sky or making other adjustments that only apply to the sky or only to the remainder of the image.

The tool feels like an extension of Photoshop’s recent Select Subject tool — the masking, which Select Subject can already help with, is arguably the more tedious part of manually replacing the sky. Photoshop, however, isn’t the first to be able to swap out skies in a few clicks. Luminar gained Sky Replace this spring, after teasing the feature last fall.

As mentioned, Skylum Luminar already has this popular feature. It contains similar options, including recoloring the rest of the scene, but houses a few more sliders, including tools to fix haze and close gaps if the original A.I. didn’t fill in spots between trees and fences accurately. Another tool will defocus the sky, mimicking the look of a shallow depth of field. However, unlike Photoshop’s upcoming tool, Luminar doesn’t create new layers with the adjustments but still allows users to go back into the A.I. Sky Replace tools to make non-destructive changes.

Adobe did not indicate when the new Sky Replacement tool will launch, only that it is coming to a future version of Photoshop. Adobe Max, the company’s annual event, often launches updated software and is scheduled for next month as a free virtual event.