Home How to How to watch ULA launch its mighty Delta IV Heavy rocket on...
How to 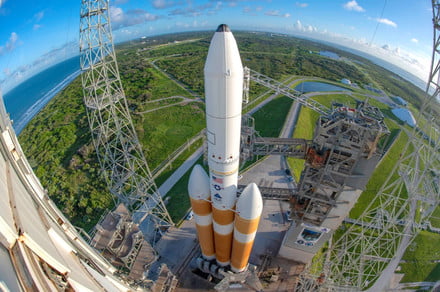 United Launch Alliance (ULA) will have another crack at launching its Delta IV Heavy rocket for the NROL44 mission late on Wednesday, September 30.

The space transportation company’s bid to deploy a spy satellite for the U.S. National Reconnaissance Office (NRO) was thwarted twice in August and also several times in recent days due to both technical issues and weather conditions.

When the MST roll began we discovered a hydraulic leak in the ground system required to move the tower which needs further evaluation. Subsequent weather will prevent the team from moving forward with tonight’s attempt. Launch is now scheduled for 11:54 pm EDT on Wed., Sept. 30.

The powerful Delta IV Heavy rocket features three booster cores for extra thrust to enable it to deploy the satellite into a higher orbit. It’s the largest rocket in ULA’s fleet and the second most powerful rocket in operation today after SpaceX’s Falcon Heavy. The most powerful rocket ever to have taken flight was the Saturn V — the launch vehicle for crewed missions to the moon five decades ago, while plans for other super-heavy rockets include NASA’s SLS system, SpaceX’s Starship, and Blue Origin’s New Glenn.

The upcoming launch will be ULA’s 141st mission and its 29th for the NRO. It’s also the 385th Delta launch since 1960, the 12th Delta IV Heavy launch, and the 8th Heavy for the NRO. The Delta family of rockets has proved its reliability over the years and currently enjoys a near-perfect success rate.

Colorado-based ULA is aiming to launch its Delta IV Heavy on Wednesday, September 30 at 11:54 p.m. ET.

You can watch the event via ULA’s YouTube channel.

If you’re a fan of rocket launches and space missions, check out this Digital Trends compilation showing the most important ones that took place over the summer months.