How to get the alien suit in GTA Online 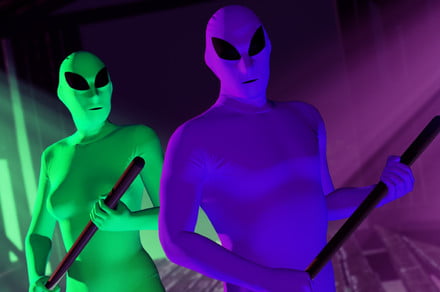 Grand Theft Auto Online is a chaotic playground filled with players constantly finding new ways to keep themselves entertained in the city of Los Santos. Street races, bank heists, and death-defying aerial stunt shows are all common occurrences in GTA Online, as one might expect from a game about characters living well outside the law. Of course, players aren’t always content to do what’s expected of them in the game’s Los Santos sandbox, and one of the most bizarre ways they’re breaking the mold is with GTA Online’s long-standing alien gang war.

Throughout 2020, players have taken to the streets of Los Santos garbed in purple and green alien costumes, taking on groups of opposing extraterrestrials or just beating other players down with baseball bats. While some players initially fought back against the space invaders by organizing alien-hunting groups, it’s clear by now that resistance is futile. With aliens now a persistent part of GTA Online’s landscape, here’s how to nab an alien suit of your own and get in on the fun.

Where to find the alien suit

Finding an alien suit in GTA Online is easy enough. Just head to any clothing store in the game (which you can find by following the T-shirt icon on your map) and go to the counter. Enter the shop menu, where you can search by category, and navigate to Outfits, then Arena War, where you’ll find two distinct items: the Green Martian Bodysuit and Purple Martian Bodysuit.

How to afford the alien suit

That’s the easy part. Actually affording your own alien bodysuit is another matter, as they each cost well over $300,000. There is a way to lower the price of the alien suits, and it’s by participating in Arena War missions. Arena War is a series of PvP vehicular combat encounters held in the Maze Bank Arena. Players can compete in destruction derbies there to win prizes, and playing this mode enough will eventually unlock a discount on the alien bodysuits.

If you’re just interested in joining GTA Online’s alien gang wars, this isn’t the way to go about it. Participating in Arena War is a far more costly endeavor than just purchasing the suits outright, and it takes a lot of time, but if you’ve already followed this path, just know that you’ll be getting a better deal when it comes time to don your alien suit.

Fortunately, there are plenty of other ways to make money in GTA Online. Playing at the casino, running time trials, pulling off heists, or just completing jobs will earn you enough money to purchase your alien bodysuit soon enough. With how often Rockstar Games just gives away free in-game cash, you may even end up earning the cost of a suit without lifting a finger.