Home How to Fortnite season 4 week 5 challenge guide: How to destroy Gorgers
How to 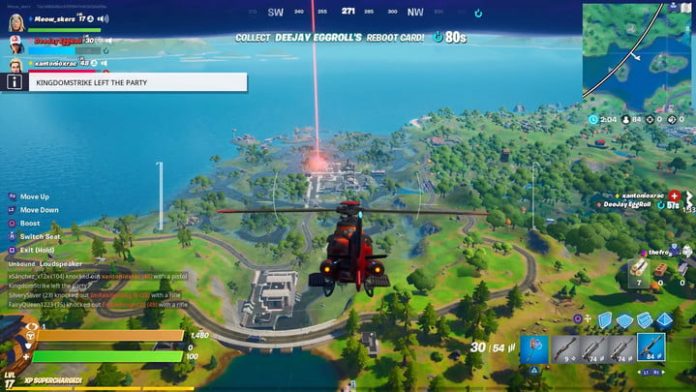 Now that Fortnite‘s season 4 week 5 challenges are live, you’ll be able to dive in to start earning XP — hopefully getting you closer to the max level of this season’s battle pass. One of the more difficult challenges for this week is one that requires you to destroy a Gorger, which are extraterrestrial drones that spawn at random locations around the map. Finding them is tricky and taking them down is even trickier, but luckily, we’ve got everything you’ll need to know about finding and destroying a Gorger, along with tips and tricks to make it easier for you. If you’re stuck and are having trouble locating a Gorger or are struggling with defeating them, this guide is for you.

Here’s how to destroy a Gorger in Fortnite.

We actually covered how to find a Gorger in the week 4 challenge guide for destroying Gatherers, but we’ll go over it again here. Gorgers are large alien drones that spawn in random locations in each match. What we recommend is to start the match by heading directly to a helicopter. We like to use the one to the north of Misty Meadows on an island. There’s a house by this helicopter that’s usually secluded, so you should have no trouble gathering gear to prepare for the fight ahead. Stock up on shields and ammo if possible, because you’ll need all the help you can get.

After you’ve geared up, jump in the chopper and fly up into the sky. Make sure you do this before the first circle hits the 2:30 mark. What you want to do is look around for a red beam that shoots up into the sky. For us, it spawned at around 2:08, but it does vary. It’s best to fly up in the sky and rotate the camera 360 degrees until you see the red beam. It’s possible you might miss it, and if you do, you can try again in another match.

Once you see the red beam, head toward it. The beam will disappear after a few seconds, so make a note of where it was coming from. You can add a waypoint to its location so you don’t lose it. When you arrive, you’ll find the Gorger floating around.

Defeating a Gorger is no joke and there’s really only one viable strategy to do so. You’ll want to use the same method as the one described in the week 4 challenge guide for dealing damage with a Gatherer’s remains. Gatherers are little mini versions of the Gorger that spawn around it and can quickly be destroyed. If you down one, you can run over to it and pick up its remains to use as a weapon. This weapon doesn’t deal high damage, but it’s likely more than most common firearms you’ll find by looting. The great thing about using the Gatherer as a weapon is that it has unlimited ammo, which gives you a huge advantage. Just make sure you pick up the remains before they explode — you’ve got a few seconds to so so.

Note that there are two minions that spawn from the Gorger — the Gatherers and other smaller drones. The Gatherers are bigger and resemble the Gorger, while the smaller drones are more circular. Make sure you’re going for the correct minion when trying to take down the Gorger. If you down the smaller minions, you’ll be able to pick up loot from its remains, but you can’t use them as a weapon in the same way you can with a Gatherer, so keep that in mind.

Essentially, you need to fire away at the Gorger’s weak points, indicated by glowing orange spots. One is at its “eye,” and others appear at the bottom and on the sides as you continue to deal damage. With the Gatherer weapon, you can get away with hitting the Gorger anywhere — not just at its weak points. But you’ll deal more damage if you hit the weak points, so do your best to do that.

In the video above, you can see the entire process — starting from the point of scouting out the area for the red beam. Once we arrived at the Gorger’s location, you can see us firing at it with regular weapons, and the result is that we barely do any damage. That’s why it’s key to down a Gatherer so you can use its remains as a weapon.

In terms of surviving against the Gorger, there are really only two things to watch out for. First, you’ll want to avoid the minions, which we detailed above. If they hit you, they don’t deal huge amounts of damage, but it’s best to try and take them out quickly to avoid the headache. The main thing you need to keep an eye on is the laser fired by the Gorger. If it connects, you’ll take serious damage, but fortunately, it can be evaded without much difficulty.

The Gorger will telegraph the laser shot, so as soon as the beam comes up, jump around either left or right and you’ll almost always avoid it. If you do get hit, destroy a Gatherer or smaller minion to collect a health pack and run behind a building to heal. Ideally, you should have a health kit on you before the fight, but you might not always be able to find one. We strongly recommend against healing right in front of the Gorger’s line of sight for obvious reasons. The Gorger can actually penetrate trees and other structures, but you won’t take damage if you’re hiding behind something that gets destroyed by the laser.

For us, it took a few minutes to take out the Gorger, particularly because we were having trouble finding a Gatherer’s remains. Once you do, you’ll notice things will go more smoothly. And as always, bring a friend (or three) to help take down the Gorger and to revive you if you go down. Once you defeat the Gorger, back away because his remains will explode and deal damage to you. Upon defeat, you’ll earn 50,000 XP for your troubles.

Facebook
Twitter
Pinterest
WhatsApp
Previous articleFortnite season 4 week 5: Drive from Slurpy Swamp to Catty Corner in under 4 minutes without getting out
Next articleKeep the big, beautiful OnePlus 8 Pro big and beautiful with a case

How to watch The Walking Dead: World Beyond online from anywhere

Unlike other major sports leagues such as the NBA, NHL, MLB and MLS which were forced to postpone their seasons
Read more