Home How to Fortnite season 4 week 4: Launch off Sentinel hands without touching the...
How to 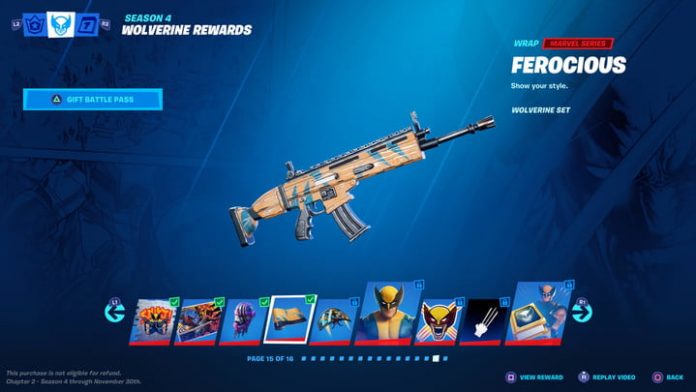 As part of Fortnite‘s season 4 week 4 Wolverine challenge, you might be stuck on bouncing off the hands of Sentinels without touching the ground. Luckily, it’s way easier to complete than it seems, since the hands are placed in such a way that you can set your controller down while you bounce between them. In this guide, we’ll show you everything you’ll need to know about Sentinel hands, from where to find them to how to bounce between them with ease.

Here’s how to launch off all Sentinel hands without touching the ground in Fortnite.

How to unlock the challenge

As with all of Wolverine’s challenges, you must first purchase this season’s battle pass to unlock the ability to complete them. There is no other way to gain access to them, unfortunately, so hopefully you’ve got some extra V-bucks lying around from a previous season. Otherwise, you can buy the battle pass for around $8. Once you’ve got it, head to the Battle Pass tab from the main menu and scroll over to the Wolverine Challenges.

Here, you’ll be able to see all of the challenges and rewards that are available up to this point. Currently, we are on week 4, meaning there are four challenges to complete so far since a new one appears each week. Once you complete the first six challenges (which will take six weeks), you’ll gain access to the classic blue and yellow Wolverine skin to use in-game. There are other rewards to earn along the way, as well. Keep in mind that you don’t actually need to complete all of Wolverine’s challenges in the order they appeared. As long as you complete them all before the season ends, you’ll still be able to earn the skin, along with the other rewards.

Now that you know how to start and gain access to Wolverine’s challenges, let’s get into actually completing the one for week 4.

Where to find Sentinels

Step one is to locate the Sentinel hands, which are found in the Sentinel Graveyard toward the center of the map. If you’ve been following along throughout this season, you’ll remember one of the previous challenges to dance atop the Sentinel heads in this area. The Sentinel hands are in the same location as that challenge, to the south of The Authority at the Sentinel graveyard. Use the image above for reference. Here, you’ll find the remains of several Sentinels, which are giant purple robots from the Marvel series that have evidently been destroyed in this location. What you need to do to complete this week’s challenge is land on one of the hands of the Sentinels, which will launch you up into the air, toward the other hands, and so on.

We chose to land on the hand of the westernmost Sentinel, but you can pick whichever one you’d like. Some are harder to reach than others, though, so just take a look at them and see which hands are easier to access. Once you land on the hand, you can basically set your controller down as your character bounces between them.

How to launch off all Sentinel hands without touching the ground

You can check out the video above for reference if you’re stuck. Try not to move your character as you’re bouncing between the hands because it could mess up the way you land, and you might have to start over again. You can see that after six bounces, you’ll gain credit for completing the challenge, and you’ll be awarded with a new Ferocious weapon wrap — featuring a Wolverine theme. If you mess up, simply go back to one of the hands and try again, but as long as you don’t move your character while you’re launching between the hands, you shouldn’t need to do that.