Home How to Fortnite season 4 week 2 challenge: Dance on Sentinel heads at the...
How to 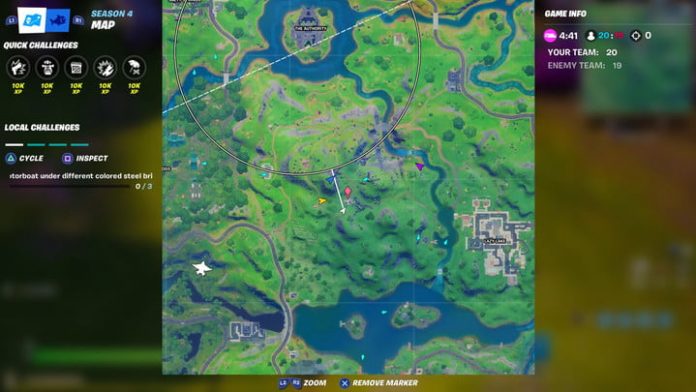 Week 2 of Fortnite‘s season 4 is ready to go — as are a new set of challenges for you to complete. One that might give you some trouble requires you to dance on the heads of Sentinels at the Sentinel Graveyard. As with most tricky challenges, this location is unmarked on the map, but not to worry — we’ve got you covered.

Where to find Sentinel Graveyard

Unfortunately, Sentinel Graveyard is not labeled on the map, but luckily, we can show you where it is. You can find this spot to the south of The Authority, sandwiched between Weeping Woods and Lazy Lake. The image above will show you its exact location. The reason it’s called Sentinel Graveyard is due to the downed Sentinels in this area, which are basically huge, purple robots. You’ll find their remains scattered around the area surrounding a house.

When you land here, make your way to the house in the center to stock up on wood and to grab a weapon to defend yourself with. Since this challenge just went live, the area is likely going to be quite busy, so be sure you’re aware of other nearby players. You’ll need some wood to build ramps up to the Sentinel’s heads because they’re elevated off the ground.

As with a lot of challenges, you’ll want to do this one in Team Rumble. That way, if you die, you can respawn, making it much easier for you to complete this one in a single game. And as always, if you’re struggling, communicate with your team and have them watch your back while you dance away.

Where to find Sentinel heads

To complete this challenge, you’ll need to dance atop the heads of three Sentinels, but there are more than three in the area. Once you’ve got enough wood (around 200 should be plenty), start building your way up to the heads of the Sentinels. You can pick whichever ones you’d like, but below, we’ll show you which ones we used.

The first Sentinel head we used is on the west side of this area, leaning up against a large hill. Build your ramp up to its head and then press down on the d-pad to select your dancing emote.

As for the next one, it’s located across the way on top of another large hill. This one requires a bit more wood to get to, but if you have around 200, you should have no trouble getting to it.

The final Sentinel head we used is to the north, down in a valley. You can actually glide over to it from the previous head. Land on top of its head and dance the night away (or until the storm gets you).

There’s also a Sentinel located to the south and to the east of the three we mentioned, but we found it easiest to dance atop the ones we mentioned. In total, there are around five Sentinels to choose from. So long as you don’t have other players shooting at you, this can be done in one quick game.