The Chromecast is arguably one of the most revolutionary products Google has ever released. It completely changed the way we move content around our screens and helped pave the way for the streaming revolution.

Google hasn’t really changed the Chromecast much since its inception. It changed the shape a couple of times and gave it a 4K version, but by and large, the experience didn’t fundamentally shift. In that time, a lot of Google’s competitors have started to catch up. Amazon, Roku, Apple, and other companies have built streaming devices of their own, directly competing with Google’s Chromecast, while far surpassing it in interface and features.

But now, Google is realizing it needs to compete in the streaming race. While the Chromecast is great for, well, casting, users are flocking to full-fledged TV experiences that help you find what to watch. After years of offering an OS that does just that but never really caught on, Google is finally re-entering the streaming wars in a big way with Chromecast with Google TV — a media player that delivers the best of Chromecast and the best of Android TV in a distinctly Google way.

Related: The best media streaming devices you can buy

What is the Chromecast with Google TV?

The Chromecast with Google TV is still a Chromecast. You can still send things like movies, YouTube videos, and music directly to your TV from your phone or computer, just by having the Chromecast dongle plugged in. But casting has shifted from something that required a standalone product to a feature of many of Google’s devices. Google already offered a bonafide content streaming experience in the form of Android TV, but with no dedicated hardware of its own, it barely existed in the market.

To solve this problem, Google has fundamentally changed what the Chromecast is. Instead of simply being a target for content to be cast to, Google has loaded up the Chromecast with Android TV, giving it both casting capabilities, as well as a full-fledged media streaming interface. And to make Android TV better and more accessible, Google developed a dedicated UX for it, which it calls Google TV.

Related: Best Android TV devices — what are your options?

Google TV gives you access to all your favorite platforms in one place. There’s Netflix, YouTube, Disney Plus, Sling TV, even Hulu, and Amazon Prime Video. Again, this is built on the Android TV platform, so if an app existed for Android TV before, it will be available on the Google TV interface. In a way, Android TV is like stock Android, and Google TV is Pixel UI. It’s a skin on top of a platform.

Because of this, you’re able to think of Google TV as an aggregator of all streamable content. There’s a “For you” section that displays movies, TV shows, and even YouTube videos that Google thinks you’ll like, and Google TV will display where you can watch that content. The Movies and Shows tabs will break these sub-categories down even further, and you can launch individual apps through the Apps tab if you want to.

The apps tab is a big deal because at the end of the day, they’re Android apps. Sure, these are apps that have been optimized for Android TV, but the Play Store on Android TV is quite built out. Google TV might be a new interface, but with Android TV as the backbone, you’ll have access to all the apps that were already built for the platform. Plus, if you’re savvy enough, you could theoretically sideload whatever Android apps you like. You’ve got some wiggle room to do this as the device itself has 8GB of internal storage to fill with apps and games. 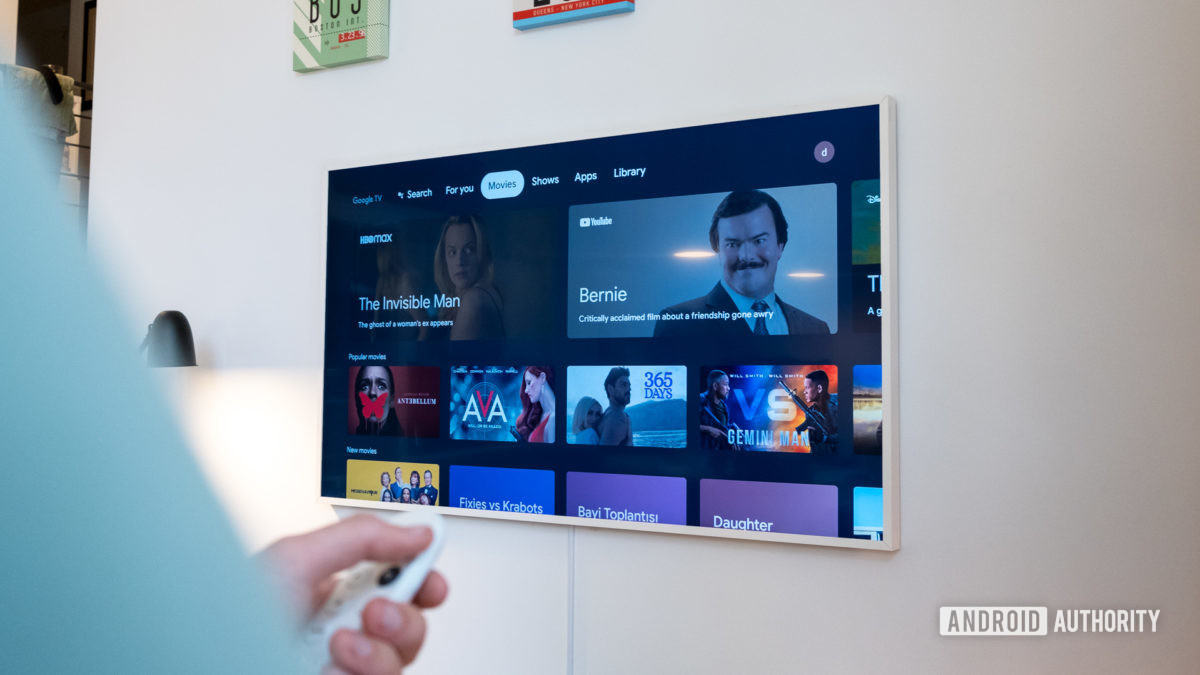 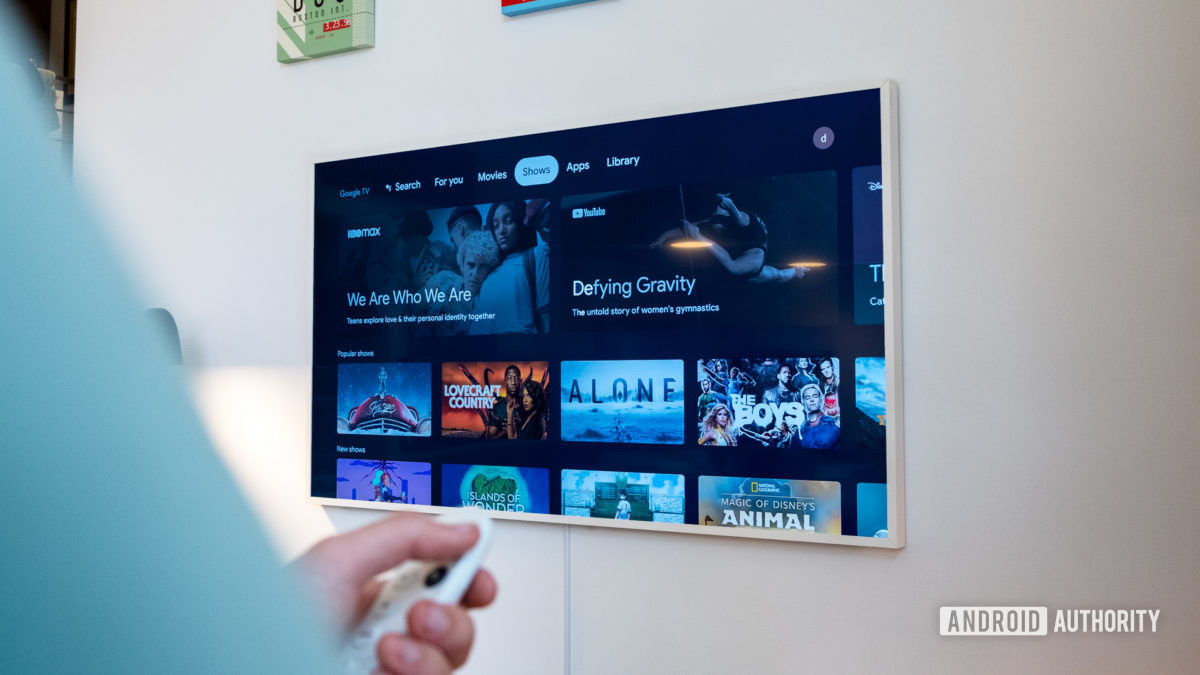 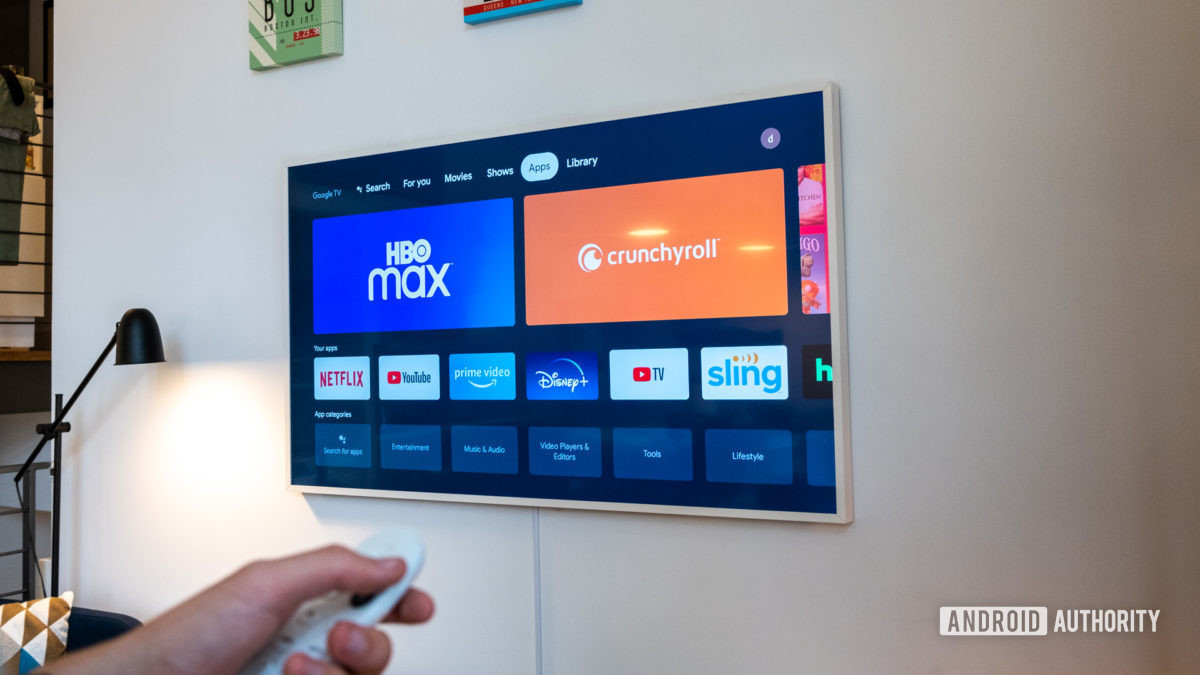 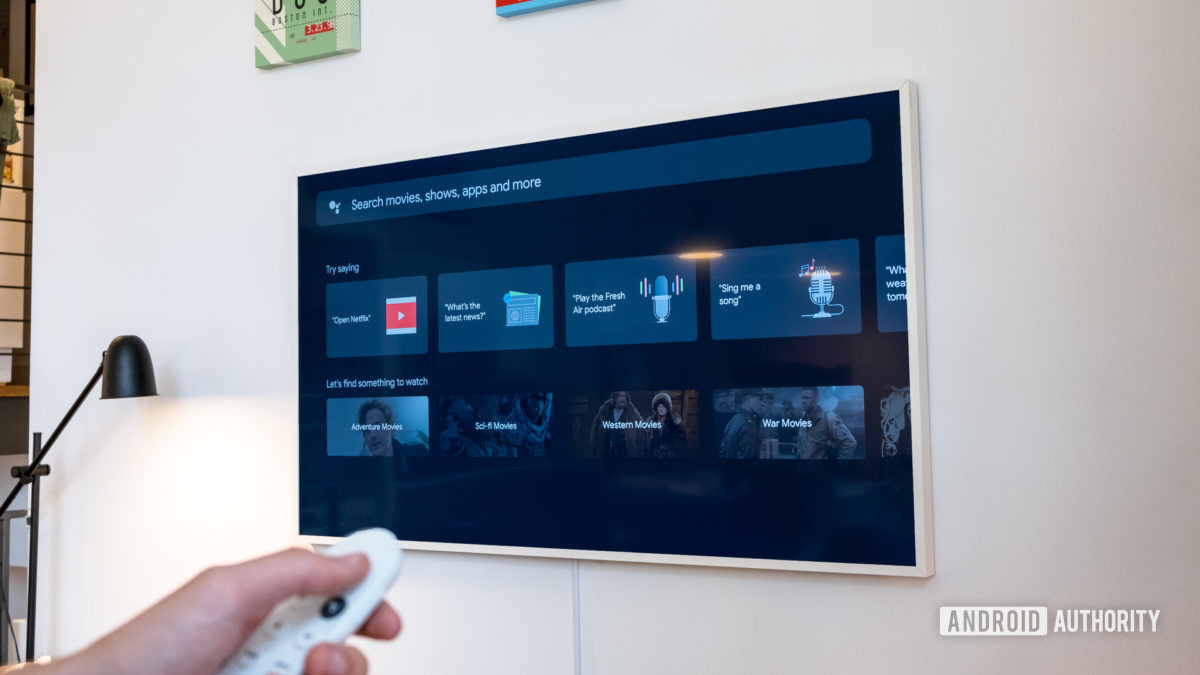 Google TV is almost like its own streaming service since it breaks things up into sub-sections like “Comedies,” “Oscar-winning movies,” or “Movies about aliens.” The interface feels really similar to something like Netflix, but the fact that it shows you content from all the most popular streaming services is great. It’s about time we had a good content aggregator.

If you have YouTube TV, there is also a ‘Live’ tab, which shows you what’s playing on YouTube TV now. You can jump in to get a channel guide or pick something from the list.

Google TV is the interface that sits atop Android TV

Overall, I am really digging the new Google TV interface. You can find pretty much any show, movie, or YouTube video super simply using Google Assistant for voice search, and being able to control your smart home with the Google Assistant is just icing on the cake. I’ve used multiple different streaming aggregators before, and this seems like one of the best. I’m a fan.

Google TV will also be an app on mobile. Google is changing the Google Play Movies and TV app into the Google TV app via a software update. You can use this app to pick things to start playing directly on your TV or watch them on your smartphone.

New hardware and a remote 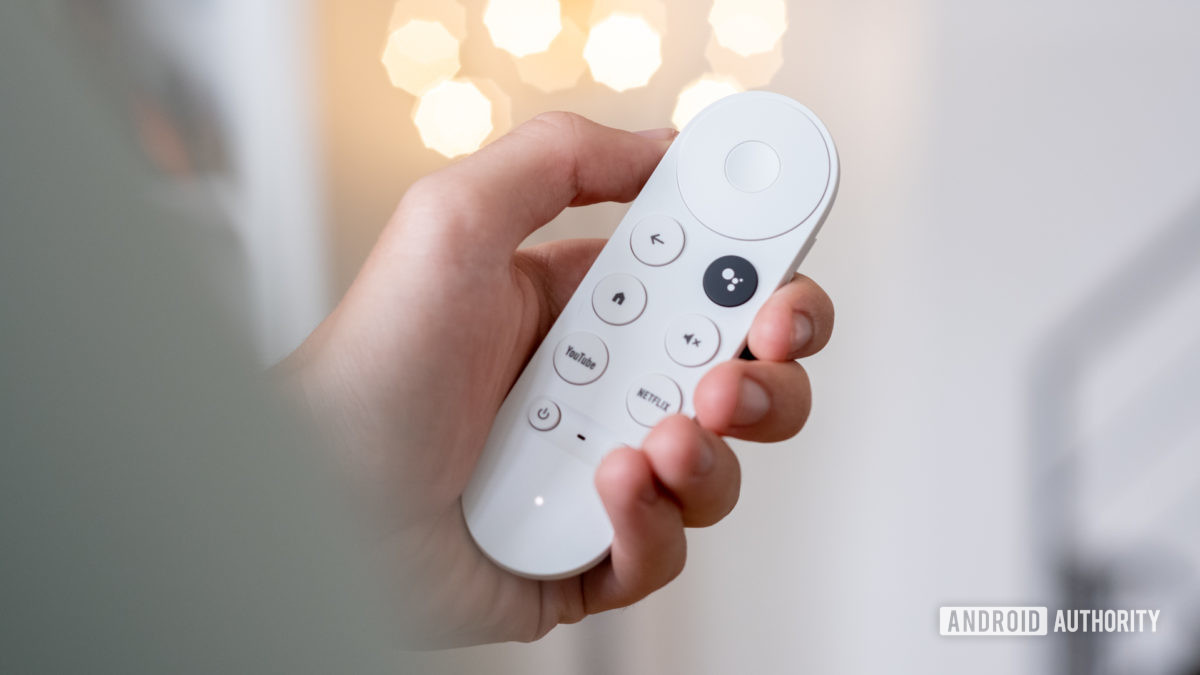 The new Chromecast with Google TV looks quite a bit different than other Chromecasts. It’s slimmer and longer, and now uses a USB-C port for power instead of the outdated micro-USB it used to use. It also comes in three distinct colors — Snow, Sunrise, and Sky.

Alongside the new dongle, Google has finally added the aforementioned remote to the Chromecast experience. The remote is fairly simple, but it can be used to control your entire TV experience. There’s a power button, an input button, and volume rockers so you can effectively replace the remote that comes with your TV. You’ve also got a home button, mute button, Google Assistant button, and dedicated buttons for YouTube and Netflix. The Netflix button can’t be remapped, but since there are so many YouTube services now, you can remap the YouTube button to launch whichever YouTube service you choose. There’s also a small microphone for when you want to talk to the Google Assistant.

The remote is powered by two batteries, which funnily enough, come in the same color as the remote itself. I would have liked to see a chargeable remote since batteries have become expensive and cumbersome, but this is all fairly common for streaming devices. I’m not a huge fan of hardware having dedicated buttons for streaming services. I think it looks tacky. YouTube makes sense since it’s Google’s own product, but Netflix seems strange since there are so many streaming options now.  Still, it is arguably the most popular of all the streaming platforms, and a partnership is a partnership. You also can’t remap these buttons, which is a bit of a bummer.

I think adding a remote to the Chromecast experience was a great call. Plenty of people I’ve talked to love the Amazon Fire TV Stick primarily because of the remote you get with it. Especially for Google TV, which is used as a content streaming aggregator, having a remote is crucial.

Google has fundamentally changed what the Chromecast is

The new Chromecast can display content at up to 4K resolution and supports HDR10, HDR10+, and Dolby Vision. It also supports various audio formats like Dolby Digital, Dolby Digital Plus, and Dolby Atmos.

Unfortunately, the Chromecast with Google TV won’t support Google Stadia at launch. Google says it is looking to add support in the coming months, however.

Google TV is powered by the Google Assistant, so Google has the ability to integrate it into all of its other smart home services. You can check out your Nest Cams, play music on smart speakers, or dim the lights in your house. Pretty much anything Google Assistant can do, the Chromecast with Google TV can do. You can ask the Assistant what to watch, ask it about the weather, or tell it to play some music, all from your TV. That’s powerful.

This turns your Chromecast into a sort of central hub for all your Google Assistant-powered devices. Just like its other devices, Google is trying to make the Google Assistant as accessible as possible throughout your life. If you’re bought into Google’s device ecosystem, you can have the Google Assistant in your phone, headphones, speakers, car, Wi-Fi routers, and now, any TV with an HDMI port too. Having the Google Assistant everywhere means you’ll always have control of your smart home products, as well as the world’s information. That’s Google’s ultimate goal. 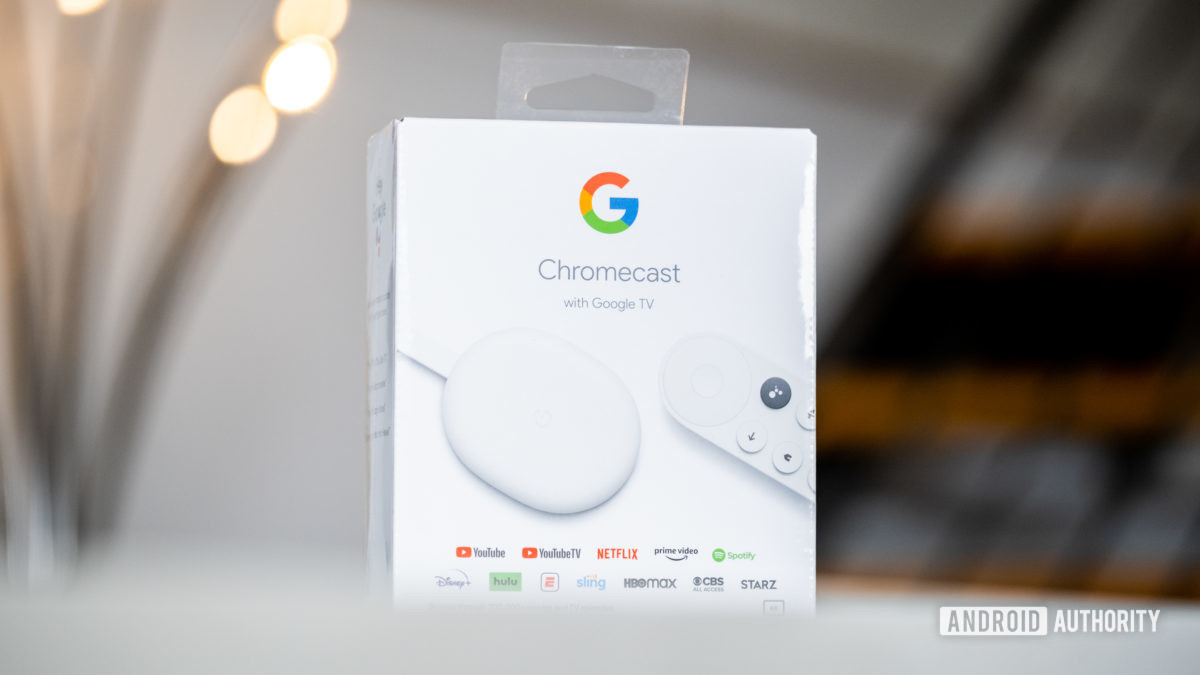 The Chromecast with Google TV is easily one of the best Android TV devices on the market. Currently, there are only a few viable options, and our favorite, the Nvidia Shield TV costs $150. If you don’t need the gaming and power users features that come with it and just want a great Android TV and Chromecast experience, this seems like the device to get.

If you want to get your hands on a Chromecast with Google TV, you can order it today for $49.99 in the United States. It’s also available for pre-order in Australia, Canada, France, Germany, Ireland, Italy, Spain and the UK.

If you’ve got more questions about the Chromecast with Google TV the check out our full rundown of everything you need to know about Google’s new streamer.

Those are our early impressions of the Chromecast with Google TV. We’ll be testing the device further for a full review soon, but for now, be sure to share your thoughts in the comments and vote in the poll above.