The writer of The Meg just launched a giant, virtual sea monster aquarium 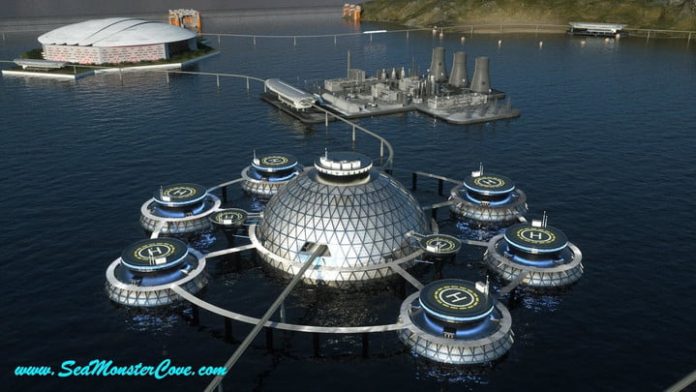 Steve Alten has spared no expense. “I’ve invested a lot of money into this project, probably a lot more than I could afford,” said the 61-year-old bestselling author of the Meg books, a series of novels about a giant prehistoric shark that was turned into a 2018 movie starring Jason Statham. “I’m way out on a limb on this one, but that’s where the fruit grows. There’s no reward without risk.”

Alten is showing off a hotel suite in what he has named the Black Demon Inn, one of two hotels in Sea Monster Cove. It’s a nice, spacious room. There’s a couch, three armchairs, a king-sized bed, an en-suite bathroom, and a large table laid out with a luxurious breakfast spread. Oh, and a pair of enormous floor-to-ceiling windows that offer one of the most spectacular — certainly most unique — views you’re going to find in any hotel anywhere in the world. Bubbles rise up from below. The suite, Alten explained, backs onto Snowflake’s tank, an enormous aquarium of sorts. Outside the windows, large LED lights illuminate the water, allowing the guest to peer into the tank and see what’s going on.

“I can also put the lights out if you prefer,” Alten told Digital Trends.

He presses a button and the room is suddenly engulfed into velvety darkness. The only light now comes from the huge panoramic windows, which fill the suite with blue light like the creepy TV set from the movie Poltergeist.

But where — and what — is Snowflake? A moment later, we get an answer as a 63-foot albino mako shark appears outside the window and snarfs down an unsuspecting fish in a single, razor-toothed bite. You don’t see this kind of thing at the Hilton!

As you might have guessed, Sea Monster Cove, aka SeaMonsterCove.com, isn’t real. At least, it’s not real in the sense that it’s someplace you can actually go visit in person. Instead, it is a virtual vacation spot: The perfect destination for COVID-19 times of limited travel and a sunken economy. But it may also be the start of an intriguing new form of entertainment — especially for those who love a good monster movie.

“We’re definitely breaking into brand-new territory here,” Alten said. “I don’t think this has ever been done before.”

The Sea Monster Cove of Alten’s imagination is a spectacular, five-star aquarium-themed resort located on Maug, a remote island in the Western Pacific. Why place a virtual island resort here? “Eight years ago, a French marine biologist, Dr. Maxime Rostand, discovered superheated mineral water is rising up through Maug’s lagoon,” Alten said. “Through a series of events (which will be told in Alten’s original episodic web TV series, Where Sea Monsters Roam), Rostand discovers the source of the hot mineral water to be a primordial aquifer located two miles beneath the seafloor, its inhabitants dating back 380 million years.”

This type of “faction” (a hazy but well-researched mix of fact and fiction) is woven throughout the Sea Monster Cove website. Imagine if, instead of pursuing space exploration, Jeff Bezos and Elon Musk had designed and built the greatest aquarium theme park the world has ever seen. Now imagine if that futuristic habitat held the most terrifying prehistoric sharks and sea monsters that ever lived.

For a monthly subscription fee of $9.95, subscribers can enjoy a plethora of 360-degree virtual recreations of Sea Monster Cove’s different locations (new creatures from other prehistoric eras will be added each month), Alten’s web TV series, and a video game in which you explore the primordial aquifer and hunt down its cavalcade of monstrous marine dwellers. The 360-degree scenes (initially these are controlled via web browser, although additional VR support may be added in the future) are freshened up a few times every week, providing more reasons to keep coming back. Heck, there’s even the chance to do a little cage-diving in the tank. Subscribers also gain access to a private library featuring color-enhanced versions of Alten’s entire 20-book catalog, various scripts, educational resources about real prehistoric sea creatures, and more.

The real hook, however, is an original story by Alten, which spans the various multimedia aspects of the project. The web TV series (episode one will debut in September) is where much of the narrative unfolds, but the plot is reflected in everything from the game to the 360-degree experience to create a cohesive narrative.

From salesman to Sharkman

This VR monster aquarium project isn’t exactly the follow-up project you’d expect from an author, but Alten has a track record for these kinds of bold, sideways leaps. In some ways, he’s a perpetual outsider — a man pretty far away from the classic model of a bestselling author. Alten didn’t become a writer until he was in his mid-30s, desperately trying to support a family of five on the commissions of a door-to-door water treatment salesman. In August 1995, he saw an issue of Time magazine with an article about the Mariana Trench, the deepest oceanic canyon on Earth.

Having watched Jaws as a teen, he wondered if the biggest shark that ever lived, Megalodon, could conceivably inhabit the most unexplored region of the planet. With no prior writing experience, he set out to pen a novel, working on it every night from 10 p.m. until 3 a.m. The story was rejected by some 70 literary agents before one person showed any interest. Against all odds, Meg: A Novel of Deep Terror resulted in a bidding war and a two-book deal worth seven figures, prior to landing on the New York Times bestseller list.

“I woke up, and before I had a chance to start dwelling on my problems, a kernel of an idea took root in my head.”

In the years since, Alten’s fortunes continued to wax and wane. It took more than two decades for the movie to finally make its way to theaters, with names like Guillermo Del Toro, Eli Roth, and Jan de Bont attached, only to drift away. When it finally hit theaters, The Meg (complete with a definite article) grossed $530.2 million against a production budget of somewhere between $130 and $178 million. A sequel is in development, alongside an adaptation of another Alten novel. Unfortunately, the burgeoning trade war between the U.S. and China, combined with a global pandemic, pushed back production dates on both movies, leading to more challenging financial times for Alten and his family this past winter.

Sea Monster Cove came from him deciding to do something completely different. “Even with my track record, almost every new novel I commit to is still written on spec,” he said. “Living paycheck to paycheck for a quarter of a century can really wear on you.”

He said the storyline that runs through Sea Monster Cove and its web TV series came to him at 4 in the morning in December 2019, during an especially challenging period in his life, both financially and health-wise (Alten was diagnosed with Parkinson’s disease 15 years ago).

“I woke up, and before I had a chance to start dwelling on my problems, a kernel of an idea took root in my head,” he said. “The opening beats of a really great story played out in my mind’s eye, and I loved it so much I knew I had to write it down lest I fall back asleep and forget it. So I dragged myself out of bed and upstairs to my office, and five hours later it was down on paper.”

In the hands of the Megheads

Alten has a sizable fanbase, whom he lovingly calls his “Megheads.” When word got out about his plan for Sea Monster Cove, he was contacted by a number of talented movie industry professionals who wanted to lend their talents. “For a while, it seemed like we were adding another amazing person every week, from a video game developer to producers, actors, and directors,” he said. “We [even] have a prehistoric shark expert on our staff whose job it is to make sure our animals look, move, and behave like the real thing.”

Plenty of people have been snippy about the literary value of Alten’s work over the years, and many film critics predicted The Meg movie would be a box office disaster, but Alten knew they were wrong. Now he hopes to buck the system again.

Sea Monster Cove is certainly an intriguing concept: The promise of a giant, sprawling story that combines video, computer game, and virtual experience into one ambitious package. (At the time Digital Trends was given a tour, the video game and web TV series were still works in progress.)

Of course, there are still plenty of question marks. For one, in a time of more subscription packages than ever, will people be willing to pay 10 bucks a month for a service built around giant sharks and sea monsters? Can a monster movie premise that, with The Meg, sustained a 1-hour-52-minute running length extend to hundreds of hours of material over many, many months? That remains to be seen.

So too are questions about whether this could inspire other storytellers to create multimedia concepts such as Sea Monster Cove to tell their own tales. The idea of, say, James Cameron giving fans a deep dive into Pandora by way of a similar service for Avatar fans is definitely a tantalizing one.

But, for now, it’s Steve Alten and his band of collaborators who are setting sail on this voyage. Forget about a single Shark Week; this is Shark Year!