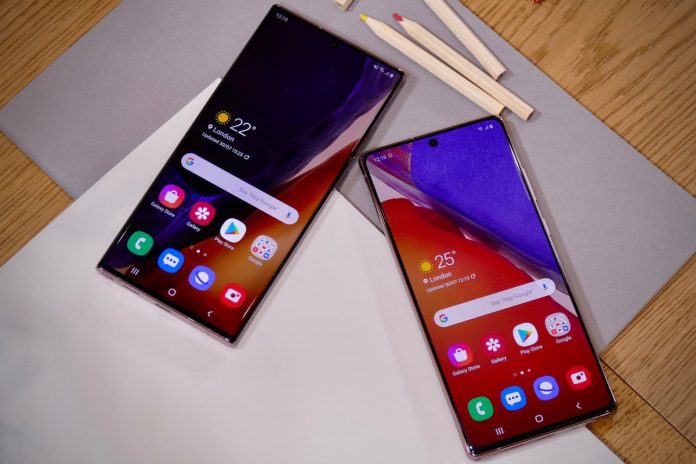 After months of rumors, the Samsung Galaxy Note 20 is finally here. The phone, announced at Galaxy Unpacked on August 5, is poised to be one of the best of the year, thanks to its powerful specifications, stunning design, and more.

But Samsung actually launched two Galaxy Note 20 models — a standard Galaxy Note 20 and a Galaxy Note 20 Ultra. As the name suggests, the Note 20 Ultra is the more expensive device, and it comes with a number of advanced features and faster components. Here’s everything you need to know about how the two models differ.

The Samsung Galaxy Note 20 series doesn’t necessarily represent a major design shift, but there are a few differences compared to previous-generation Note devices. Both new devices offer an edge-to-edge display with a hole-punch camera cutout in the center of the top of the display. On the back of both phones, there’s a rectangular camera bump, which protrudes quite a bit from the back of the phone. It’s more prominent on the Note 20 Ultra, but it’s still pronounced on both.

Around the edges, both phones have a volume rocker, a power button, and a USB-C port. There’s no Bixby button to be seen on either device, and they both have a port for the S Pen on the bottom of the phone.

Both devices are largely built from glass, so it’s worth doing your best to ensure you don’t drop them. Thankfully, however, they both have an IP68 rating, so while they’re not necessarily built to withstand swimming, they should survive an accidental dunk in the bath or pool.

Both of these phones look good, and both have great displays, but the display on the Galaxy Note 20 Ultra is better — so it’s the winner here.

That’s likely to make it a little better at handling some multitasking. Still, both phones are among the most powerful Android devices on the market — so don’t assume that just because the Note 20 has a little less RAM that it’s unable to handle certain tasks.

Apart from size, the camera is perhaps one of the main differences between these two phones. Let’s compare these cameras sensor by sensor.

The main sensor on the standard Note 20 comes in at 12 megapixels, while the one on the Note 20 Ultra sits in at 108 megapixels. Both offer optical image stabilization and an f/1.8 aperture, however the 108-megapixel resolution on the larger device enables features like Samsung’s Space Zoom, which supports up to 50x zoom on this device.

We have yet to fully test the cameras on these two phones, but at least on paper, the Galaxy Note 20 Ultra has a more feature-rich camera array, so it’s the winner here.

The Galaxy Note 20 and Note 20 Ultra come with Samsung’s One UI, and the latest version is built on Android 10. One UI offers a very Samsung-y design, with colorful logos and a ton of customization options. Some argue that it’s a little harder to use than more stock Android approaches, and there are likely to be some apps that come with the device that you may not need.

Samsung doesn’t have the best track record when it comes to Android updates, but considering this is a flagship phone, it is likely to get updates for at least a few years. There’s no guarantee that they’ll be that timely, and if you want quick updates, it’s worth looking into a Pixel device instead.

The Samsung Galaxy Note series has long offered some features that other phones just don’t. Perhaps the most notable of these is the S Pen, which slides into the bottom of the phone when you’re not using it, and can seriously come in handy for things like note-taking. Samsung has made some serious improvements here, and latency is down to 9ms. A quick menu also shows up when you take the S Pen out of the phone, allowing you to quickly access features that you might want to use with the S Pen.

Both phones also offer compatibility with Samsung DeX, allowing you to use your phone in desktop mode, by plugging it into a monitor. New for this year, you can also use it in wireless mode with a compatible smart TV.

As we said at the beginning, it’s hard to deny that the Galaxy Note 20 Ultra is a much better device. With a higher-resolution display and a better camera, if you want the best experience, the more expensive phone is the way to go.If you’re a Samsung fan that doesn’t want to spend all that cash, you’re still getting a flagship phone with the standard Galaxy Note 20 — and if you don’t really care about the highest resolution display or those extra camera features, you probably won’t miss them.