Home How to Fortnite season 3 week 7 challenges: Where to collect stone at Rapid’s...
How to 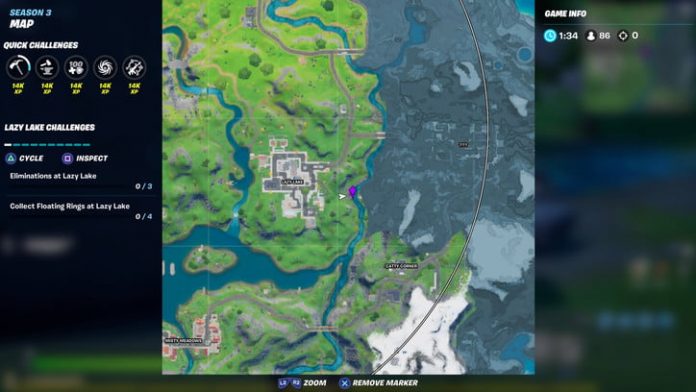 Fortnite‘s season 3 week 7 challenge for collecting stone in an area called Rapid’s Rest is sort of tricky because this location isn’t depicted on the map. You’ve probably scanned the entire map with a fine-tooth comb trying to find it, with no luck. In this guide, we’ll show you where to find Rapid’s Rest, how to complete the challenge, and what you get for finishing it.

Where to find Rapid’s Rest

The hardest part about this challenge is simply finding the Rapid’s Rest location. Don’t you just hate when the game asks you to go to locations that aren’t labeled on the map? Not to worry, though — we’ll show you exactly where it is. To find it, head to the river to the east of Lazy Lake. Normally, landing right at Lazy Lake isn’t the best idea since it can be sort of busy there, but if you head to the river just east of the large structure, you should be safe. Use the image above for reference.

You’ll want to look for an area with large boulders that appear on the bank of the river. Across the way is a small building with some common loot inside. From our experience, we were able to gather all the stone we needed with no interruption from other players, but to be safe, make sure you scout the area a little beforehand.

How to complete the challenge

Once you’re there, all you need to do is gather 300 stone from the rocks and boulders in this area. For us, it took around five to six boulders to complete the challenge. Remember, you must gather stone only from this area for it to count. There’s plenty of stone for you to be able to gather 300 in one go, and it should only take a few minutes.

The other thing you might want to do if you aren’t comfortable is land somewhere else with better loot before going to Rapid’s Rest. It’s not necessary since this is a low-traffic area, but if someone else is also trying to complete the challenge at the same time, you might get caught off guard, especially if all you have is your pickaxe. There are some low-tier weapons nearby, though, so you should be okay. Either way, smash those rocks and you’ll be good to go. Hopefully, by the time you’re finished gathering stone, you’ll be able to make your way back to the fight without the circle closing in on you.

As with most weekly challenges, you’ll get 35,000 XP for completing this one. It’s not a ton, but considering how simple the challenge is to complete, you shouldn’t ignore it. And with that, you’ll be ready to move on to some of the other challenges!