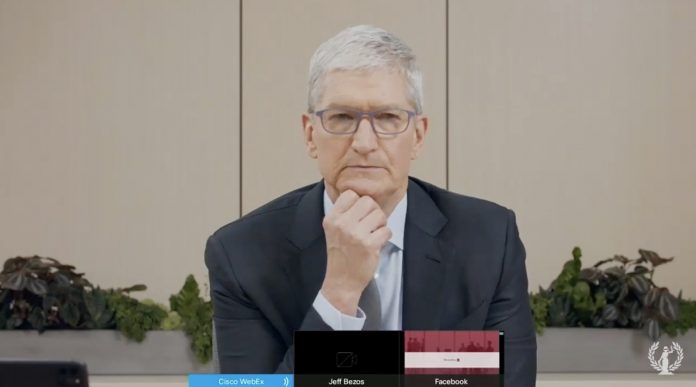 Apple CEO Tim Cook is today testifying in an antitrust hearing with the U.S. House Judiciary Antitrust Subcommittee, where he was questioned about Apple’s App Store policies.

Cook was hit with complaints from developers that the committee has spoken to. Apple was accused of making its ‌App Store‌ rules unavailable to developers, arbitrarily enforcing those rules, changing them at will, enforcing rules that benefit Apple, and discriminating between smaller and larger app developers.

In response, Cook claimed that Apple treats all developers the same, with open and transparent rules. “We care deeply about privacy and quality. We look at every app, but the rules apply evenly to everyone.” Cook said that some developers are not favored over others and that Apple examines all apps, small or large.

Cook was questioned about reduced commission rates for apps like Amazon Prime, which Cook said are available to “anyone meeting the conditions.” The Congressman questioning Cook went on to ask whether Apple uses data collected from the ‌App Store‌ to decide whether it would be profitable for Apple to develop a competing app, a question that Cook skirted.

Cook also said that Apple does not retaliate or bully app developers who do not agree to Apple’s ‌App Store‌ rules. “It’s strongly against company culture,” said Cook.

The antitrust hearing is ongoing, and can be watched live over on YouTube. The antitrust subcommittee is also questioning Facebook CEO Mark Zuckerberg, Google/Alphabet CEO Sundar Pichai, and Amazon CEO Jeff Bezos. Most of the questions so far have been for Pichai and Zuckerberg, but we’ll share additional details on anything else notable Cook has to say.Tags: App Store, Tim Cook, antitrust
This article, “Apple CEO Tim Cook Likens Competition for Attracting Developers to a ‘Street Fight for Market Share’ in Smartphone Business” first appeared on MacRumors.com