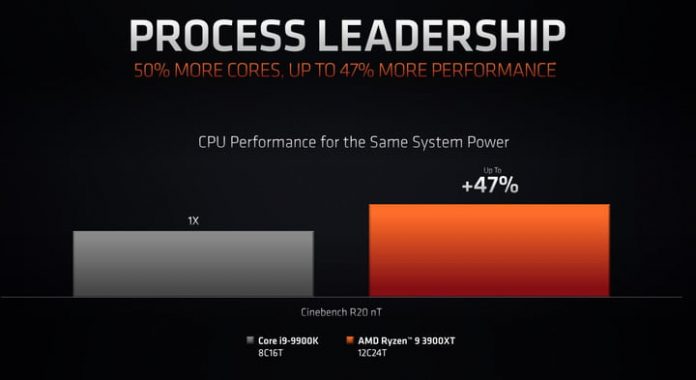 Afterr announcing its new Ryzen 3000XT desktop processors, AMD has made some ambitious performance claims about its chips. Specifically, the company has shown how the 3000XT outperforms competing processors from Intel, including the top-of-the-line Core i9-9900K.

Based on AMD’s optimized 7nm node and utilizing the Zen 2 processor architecture, the new Ryzen 3000XT series starts at just $249 with the Ryzen 5 3600XT. The family includes upgraded configurations like the $399 Ryzen 7 3800XT and the premium $499 Ryzen 9 3900XT. Unlike the standard non-XT Ryzen 3000 processors, the XT chips gain up to a 200 MHz boost in clock speeds thanks to refinements to the 7nm node to squeeze out more performance, AMD claims.

So, how do these improvements translate to real-world performance? Compared to Intel’s popular gaming Core i9-9900K desktop processor, AMD claims that the Ryzen 9 3900XT comes with 50% more cores, which translates to a 47% performance improvement when tested using the Cinebench R20 benchmarking utility. AMD’s testing results show that its XT processor outperformed Intel’s Core i9-9900K by as much as 25% on Adobe Premiere CC.

Even though the margins may seem significant when comparing AMD’s and Intel’s silicon, the difference in performance between AMD’s X and XT series was more modest.

While the new XT series excels in content creation tasks against its rivals, gaming performance was more consistent between the three competing processors. Both the Ryzen 9 3900X and 3900XT were able to display similar frame rates on popular titles, including APEX Legends, Shadow of the Tomb Raider, Hitman 2016, GTA V, Far Cry 5, Devil May Cry 5, DOTA, Fortnite, and more. Intel’s Core i9-9900K also kept up with AMD’s processors, however, the Core i9 managed stronger frame rate performance on a few titles, like Counterstrike: Global Offensive and Rocket League, while trailing in others, like Devil May Cry 5 and Fortnite. AMD’s gaming benchmarks were taken at FHD resolution.

The benchmarked results were largely similar with other members of the XT family. Like AMD’s Ryzen 9 3900XT, performance of the Ryzen 7 3800XT and Ryzen 7 3800X were similar in creative tasks, with the Ryzen parts outperforming the Intel Core i7-9700K. The Ryzen 5 3600XT and Ryzen 5 3600X also performed similarly, and AMD’s silicon led in benchmarks on content creation tasks against the Intel Core i5-9600K.

For enthusiasts, upgrading to the XT series should be easy if you’re already within AMD’s ecosystem. The new XT processors utilize the company’s AM4 socket and will be drop-in ready with any 500-series chipsets, including the X570 and the B550. If you’re looking for a new PC, the XT series will be available in a number of custom gaming desktops from partners like Maingear.

AMD is also bundling a free copy of Assassin’s Creed Valhalla if you purchase an eligible desktop processor between July 7 and October 3 — the game will launch in time for the 2020 holiday shopping season. Enthusiast gamers will likely want to wait until AMD launches its Ryzen 4000 desktop processors later this year.

AMD also announced an update to its StoreMI software, which is designed to speed up your storage drives while enhancing data integrity. The new 2.0 release of StoreMI brings support to any HDD and SSD combo and prioritizes frequently accessed data to the SSD, helping apps and games load faster. AMD claims that StoreMI can help gains with a combo drive load up to 1.13 times faster when compared to a system with just an HDD.

Similarly, apps can launch six times faster, while your entire PC can start up 1.31 times faster. StoreMI really comes into play when you have a system with a low-capacity SSD and a larger HDD as part of your budget, so it may not be of significance to gamers who max out on SSDs. StoreMI 2.0 will be available on the X570 starting July 7 and arrive to the X470, B450, B550, X399, and TRX40 later this year.

Facebook
Twitter
Pinterest
WhatsApp
Previous articleNew Moto G 5G Plus does phones in 2020 right, delivering specs and value
Next articleLogitech made a Mac-specific MX Master 3. Is it the ultimate mouse for Mac?

How to watch Death to 2020 anywhere online

Between the pandemic and subsequent lockdowns as well as the recent US presidential election, 2020 has been a year like
Read more