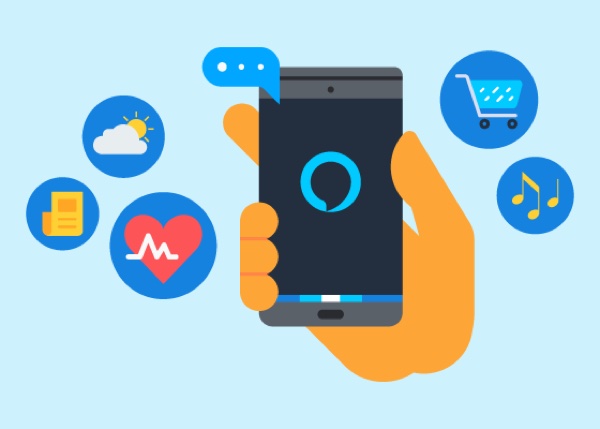 Amazon’s Alexa assistant will soon be able to open Android and iOS apps using voice commands, thanks to a new feature called Alexa for Apps that Amazon is launching for app developers as of today.

With Alexa for Apps, iPhone and Android users can make requests using the Alexa app, Alexa built-in phones, or Alexa accessories like Echo Buds and interact directly with mobile apps similar to Siri or Google Assistant.

On iPhones and Android phones, Alexa would serve as an alternative to the voice assistants built into the smartphones by default, and Amazon envisions the feature being used for voice searches and activating app functionality.

Alexa for Apps can be implemented into any app that can be opened with deep links, and Amazon says that the feature is being added to experiences for TikTok, Yellow Pages, Uber, Sonic, Zynga, Volley, and more.

According to Amazon, Alexa for Apps works right away in mobile apps with content that can be opened through deep links, and it can be utilized by adding Alexa for Apps to a custom skill.

You don't have to wait until Prime Day to score some savings with a cheap 4K TV deal. Today only,
Read more

Aside from a new finish, the "Special Edition" will likely not be any different from the OnePlus Nord variants already
Read more

In the off chance that you didn’t know it, Amazon is holding its Prime Day festivities, giving consumers a chance to save big on products. But, not to be outdone, our partners at StackCommerce are holding their own promotion.Starting today (October 10) and running through October 14, you can save an extra 20% on things site-wide in the AG Deals Store. All you have to do is enter promo code OCTSALE20 at checkout and you’ll get the added discount.Look around there’s plenty of great things to be had in a wide variety of categories. We’re talking products, software, services, training, and more.Take for instance this HD Mono Telescope.This portable, lightweight monocular telescope delivers 50×60 magnification while maintaining picture-perfect image quality.With fully coated optics and BAK4 prisms glass, your view won’t be compromised. Look at the face of the person about 1,000 meters, the text or number of the viewing building 2,000 to 3,000 meters.With a swing-up eyepiece, this monocular is also suitable for people who wear glasses. It’s good for sporting events, concerts, bird watching, camping, fishing, and traveling.Right now, the HD Mono Telescope is available for 14 percent off its regular price, only $46.99 from the AG Deals store. Toss that coupon code on (OCTSALE20) and you’ll get it down to $37.59.Best SellersEarn Credits!For every $25 you spend in the AG Deals Store you get $1 credit added to your account. And, if you refer the deal via social media or an email that results in a purchase, you’ll earn $10 credit in your account.First Time Buying?If this is your first time buying, you are also eligible for 10% discount! Just be sure to subscribe for email updates.Free StuffNot looking to spend any money today? No worries. You can still visit the AndroidGuys section for freebies and pick something anyhow.
Read more