Home News iOS 14 lets you perform actions by tapping the back of an...
News 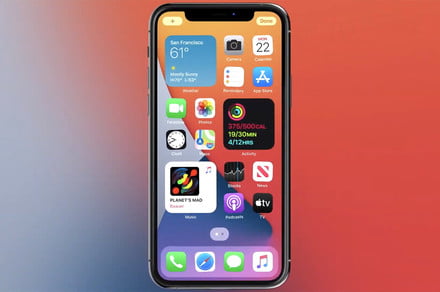 At the WWDC keynote, Apple couldn’t run through every feature it’s bringing for iPhones with the iOS 14 update. Buried underneath the pile of headlining announcements, one of the more intriguing additions it skipped is a new gesture that allows you to perform actions by simply tapping the back of your iPhone.

iOS 14 offers an accessibility option (via MacRumors) that lets you trigger actions such as pulling down the Control Centre or summoning Siri when you tap the back of an iPhone twice or thrice. There are nearly two dozen actions you can set up including activating the Reachability mode, taking a screenshot, bringing up Spotlight search, and more. Plus, you can configure different gestures to the two-tap and three-tap gestures.

More importantly, these gestures support any custom shortcuts you may have built on your iPhone as well. Therefore, as demonstrated in the tweet attached below, you can take advantage of these accessibility features to instantly talk to third-party apps like the Google Assistant.

Double tap the back of the iPhone to launch Google Assistant? Yes please. #iOS14 pic.twitter.com/FeKOlD0WL5

Based on feedback shared by early iOS 14 users online, the gestures are fairly accurate and even work through thick, leather cases. For now, it seems they’re limited to the iPhone X or newer models.

It’s unclear, however, which sensors Apple is taking advantage of to power this feature. Incidentally, Google’s latest update for its mobile operating system, Android 11 has a similar, hidden gesture that’s said to be gathering data from the phone’s gyroscope and accelerometer sensors to detect the taps.

We’ve reached out to Apple for more information on this and we’ll update the story when we hear back.

Unlike Android, however, you can use these gestures right away on your iPhone running iOS 14. You can access them by heading over to Settings > Accessibility > Touch > Back Tap.

Other than that, the iOS 14 update adds several features iPhone owners have been requesting for ages such as homescreen widgets, a drawer to tuck all your least frequently accessed apps, and a Siri page that doesn’t take up your phone’s entire screen space. It also revamps certain elements to keep up the times like more transparency for the permissions an app requests on their App Store listing.

Everything that’s old eventually becomes new again. As it turns out, we’re currently in a phase where old school gaming and graphics are in vogue. Despite all of the advancements in storytelling, AI, and visuals, we can’t get enough of that retro stuff. Choppy 8-bit graphics, chiptune music, and side-scrolling fighters are back — as if they ever left.The last few years have given way to a host of classic game consoles being offered in new manners. Nintendo has had great success with it twice now and Sony and Sega have also done well with their respective units, too.If you’re ready to get in on the classic games of the 80s and 90s, you’re in luck. The AG Deals Store has the Retro TV Game Console on sale for just $35.95, a discount of some 64% from its normal price.Normally the RetroMini runs about $100 but we’re here to help you save a few bucks. If you visit the AndroidGuys Deals Store, you’ll find we’ve got a $20 discount on the portable gaming device.Take yourself back to an era that was dominated by the likes of Pokemon, Mario, Donkey Kong, Zelda, and Power Rangers. Yeah, we know they’re all pretty popular as we approach 2021, but you know what we’re getting at, right?Not only will you get the Retro TV Game Console and two controllers, but you’ll also take home access to some 620+ games, too. That’s more than enough to let you play a new game every day for more than a year and a half!FeaturesBuilt-in 620 classic gamesErgonomic design for comfortable handlingDual control TV handheld video classic game consoleSupports multi game & you can have a great funEasy to use & to operate at affordable prices1x TV Video Games Console2x Hardwired Joysticks1x Audio/ Video Cable For TVWhere to BuyAvailable in the AndroidGuys Deals Store, you can save 64% off the normal cost ($99) if you act fast. Pick your Retro TV Game Consoles up for only $35.95 right now.Save even more!In addition to the savings above, when you buy through AndroidGuys Deals, for every $25 spent, you get $1 credit added to your account. What’s more, should you refer the deal via social media or an email that results in a purchase, you’ll earn $10 credit in your account.If this is your first time buying, then you are also eligible for a further 10% discount when you subscribe for email updates.How about a freebie?Not looking to spend any money today? That’s alright, we understand. Why not visit the AndroidGuys section for freebies and take something anyhow? Go ahead, grab two!
Read more

Casual readers may not know much about the Pamu brand, but it has been making headphones for years, although it stays mostly in the earbud market. Its biggest claim to fame, to me, is unique design language.Take the Pamu Scroll, for example. Most truly wireless earbuds come with a simple clamshell type case that you plop your earbuds in when they need to charge. The Scroll sort of unwrap, much like an old school scroll. An interesting choice in terms of design, to be sure.Does Pamu do anything fun or odd with its recently introduced Explore over-ear headphones? Let’s dive into a review.Build/UnboxingI tend to lump box contents in with the build quality. Off the bat it’s pretty impressive with a nice hard shell carry case for these headphones. I always like when I get a decent case with my headphones. This one may not be super stylish, but it’ll get the job done. You’ll also find an auxiliary cable and USB-C cable in the box.On to the actual headphones, they have a decent heft to them. They are not overly heavy but there is a good amount of weight.My first quibble with the Explore is that the entire thing is made out of plastic. While technically not an issue, I would like to see a some metal in there –especially for the $199 price tag. With that said, they do have the fairly standard creaks and sounds you get from plastic. I would imagine that the sound will become worse over time.The headband and ear cups have a real soft and nice padding to them. On the ear cups you’ll find the touch controls, “rocket lights”, while the bottom is where you locate the power switch, charge port, and 3.5mm.On most headphones the ear cups rock up and down a bit to accommodate for different size heads. These, for whatever reason do not. They have a very angular design to them, which on my head make them press harder at the bottom of my ear than the top.This creates two problems for me. One, they’re not super comfortable; I can feel the pressure difference and it’s distracting. And two, I wear glasses. When I listen to these with my glasses on it degrades the sound quality considerably.Speaking of distractions, when I do have my glasses on the “rocket lights” flash constantly and create a glare on my lenses when they do.I hate sounding so negative, but there is one more thing that I had trouble with: touch controls. They are insanely sensitive. If you have to adjust these at all, I guarantee you will activate the touch controls when you do. Even if you try extra hard to make sure you don’t touch the outside of the ear cup at all.One positive I can take from this is battery life. Pamu claims 27 hours on the Explore. During my testing, I was consistently getting about 30 hours between 65-70% volume. I didn’t test the fast charge capabilities, but considering the battery life, I wouldn’t doubt the 10 minutes of charging provides five hours of playtime.Sound qualityThis is usually my favorite part of testing headphones and on paper the Pamu Explore doesn’t disappoint. As far as codecs go it has pretty much everything you’re looking for in a good pair of headphones, aptX, aptX HD, SBS, and AAC.Before I get too far, I’d like to remind you that if you wear glasses you might want to pass on these. Thin wire frames may be okay, but plastic frames impact the sound experience, breaking “the seal” around your ear and losing a lot of the finer detail in music.That said, while listening to the Pamu Explore with my contacts in, I would put the sound quality at decent. But, if I’m factoring in the $199 price tag, I would put the sound quality at almost bad. It pains me to say all of this because I really wanted to like these.The bass extension is actually really nice. It’s tight, and not all over the place and it does hit you right in the ear hole. On bass-heavy songs the bass just sucker punches the mid range right in the gut.To round out the soundstage, the highs just feel a little recessed to me and lack the clarity I was hoping for. Overall, I think the Pamu Explore suffer from a lack of separation in the soundstage. Everything is right next to each other and the bass just bullies everyone else around.ThoughtsTaking everything into consideration, from packaging to sound quality, there’s a lot left to be desired with the Pamu Explore. Pamu gets some things very right, (nice hard shell case, USB-C, battery, and even bass response), but the things it gets wrong, it gets very wrong. To recap, this includes the overall sound quality, over-sensitive touch controls, the rocket lights, general design of the headphones. I simply can’t recommend these. I want to, I just can’t.AvailabilityYou can learn more about the Pamu Explore at the Padmate website where you can also purchase them.
Read more

Let's hope we can still find the app in a sea of colorful icons.What you need to knowA user on
Read more

How to set up a HomePod mini

Apple's new HomePod mini is a great personal smart speaker, but setting it up takes the right steps. Here's everything you need to do to get it up and running.
Read more