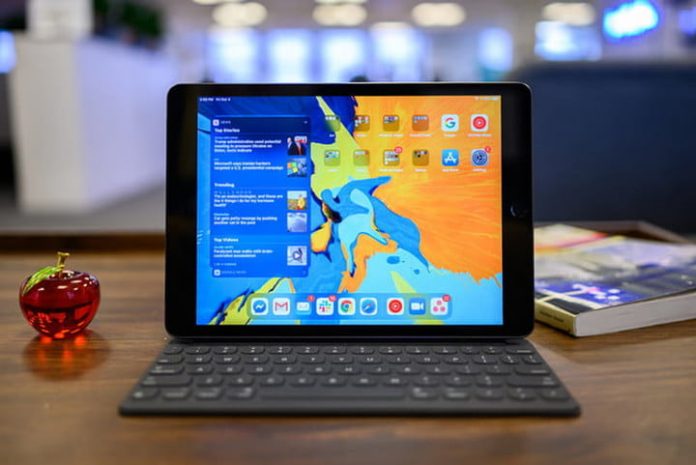 Not sure what to give dear ol’ dad on Father’s Day? How about a tablet? A tablet’s screen is bigger than a phone’s so he’ll enjoy watching his favorite sports matches, movies, and shows a lot more. The best ones are also equipped with incredibly powerful processors so he can use it as his primary work device. Two of the best tablets right now are on sale at Best Buy for up to $80 off. Order the Apple iPad 10.2 and Samsung Galaxy Tab S5e today and you can be sure they will arrive before the big day.

The standard iPad’s bezels are still obscenely large (slimming them down would have made it look a tad more contemporary), but this tablet now boasts a bigger 10.2-inch screen compared to the previous model’s 9.7-inch display. In comparison, Samsung’s Galaxy Tab S6’s trimmed bezels look fetchingly modern, and so do those of the iPad Pro. None of this means that the iPad feels cheap, though. It has a nice substantial weight to it, plus it sports a 100% recycled aluminum enclosure, which is good for the environment. Instead of Face ID, which remains exclusive to the iPad Pro and the latest iPhones, you get Touch ID, although that’s not exactly a deal-breaker for most users. What sets this apart from the older iPad 9.7 is support for the Smart Connector so you can use it with Apple’s Smart Keyboard (sold separately).

As mentioned earlier, this device offers a slight increase in screen size. The LCD panel’s pixel density is the same at 264 pixels per inch, although it looks sharp and colorful and is very bright. And thankfully the headphone jack has not been removed, unlike the iPad Pro. You don’t have to go hunting for a 3.5mm-to-Lightning jack once your Bluetooth headphones lose power.

Strangely, the iPad 10.2 didn’t get a processor upgrade, unlike the rest of the iPad lineup, which now boasts the A12 Bionic chipset. However, this tablet’s A10 Fusion processor still packs plenty of power. Multitasking with several apps open won’t be an issue, and navigating the new iPadOS is buttery smooth. The previous iPads ran with just a slightly altered version of the iOS, but the iPadOS is an entirely different beast. You have the ability to use multiple apps in the Slide Over menu, a revamped home screen layout that includes the Today View widgets, desktop-grade Safari, and multi-window apps. You can now even use Split View on the same app, such as for having two Google Docs open side by side.

The first-gen Apple Pencil is compatible with this iPad, and it remains an excellent and responsive tool. There’s still no way of storing it, though, unlike the second-gen Apple Pencil, which magnetically attaches to the iPad Pro, and it’s still in danger of snapping in half every time you charge it through the Lightning port. Finally, the battery life was pretty good. You’ll be able to use the iPad for a maximum of three days with intermittent use, or a full workday if you’re going to use it as your primary device.

Despite its shortcomings, the iPad 10.2 is the best tablet that you can buy on a limited budget. It is powerful, has a fantastic operating system, and serves up solid battery life. You can get it with 32GB of memory at Best Buy for just $250 instead of $330, and 128GB of storage for $330, down from $430.

The Samsung Galaxy Tab S5e is a stunningly designed Android tablet with a gorgeous screen, light and slim build, and an attractive and easy-to-use interface. Simply put, this tablet is going to be hard to put down once you start using it – and that’s not even the best part! Although it looks like a fine piece of digital jewelry, it doesn’t cost nearly as much as the iPad Pro. Apple’s flagship tablet will set you back nearly $1,000, while the Galaxy Tab S5e is infinitely more affordable at just $350 at Best Buy.

This tablet is so slim and light (an astonishing 5.5mm profile and weighing just 399 grams) that if it were any thinner and lighter it would seem like a piece of paper. Despite being extremely portable, though, you will never question its build quality, thanks to its sturdy aluminum unibody. It’s clean, simple, and stylish, and the only slight bumps you’ll see are the rear camera and the power and volume buttons on the right edge. The power button doubles as a fingerprint sensor and while it’s fast and precise, it’s much too small, and we found ourselves having to look for it instead of finding it with just our fingers.

Samsung is renowned for its stunning screens, and the Galaxy Tab S5e is no exception. The 10.5 AMOLED panel is remarkable. Contrasts are rich, colors are vivid, and since it’s so lightweight, it’s great as a Kindle alternative. Audio quality is an entirely different story though. Despite boasting four speakers that are fine-tuned by AKG and support Dolby Atmos, it’s just not good enough. Blame it on this tablet’s thinness.

The Galaxy Tab S5e’s Qualcomm Snapdragon 670 processor is just a standard midrange smartphone chipset. That’s why we were extremely surprised at how well it performed. We never encountered any glitching or stuttering when browsing the internet, watching movies, or reading. Battery life is also terrific, capable of lasting up to five days with normal usage. It can even go on standby mode and consume absolutely no power at all when idle.

Samsung’s tablet version of its One UI software over the Android Pie 9.0 proved to be uncluttered, logical, and neatly laid out. Apps are uniform in size, navigation is fluid, but transitions are a bit slow.

The Samsung Galaxy Tab S5e’s gorgeous screen isn’t the only reason to buy it. The slick software and performance are a delight, and the heavy-duty battery guarantees you won’t need to go hunting for the charger for days at a time. Get one with 64GB of memory for $350 instead of $400 at Best Buy today.

Facebook
Twitter
Pinterest
WhatsApp
Previous articleABC Mouse is the best way for kids to learn from home, and it’s 50% off
Next articleWhen copyrights make finding video soundtracks hard, this A.I. musician can help

We sometimes hate to admit it, but we're not always productive as we should be. Sometimes, even if we claim
Read more
News