Home News iFixit Details Which Parts Can Be Swapped Between the iPhone 8 and...
News 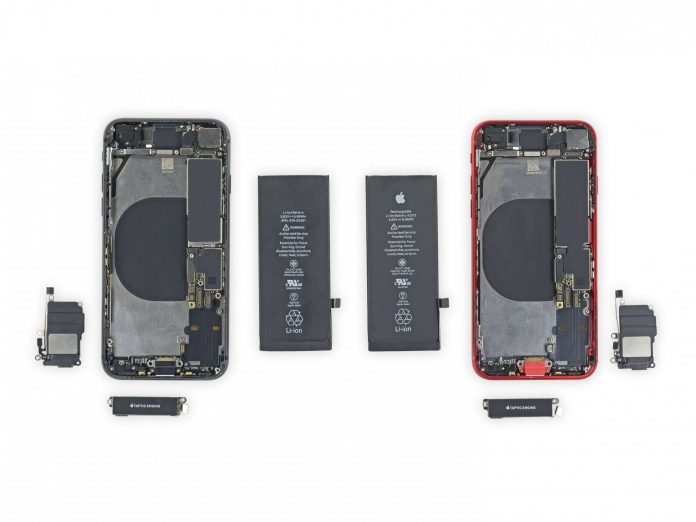 iFixit today shared a new report detailing which parts from the new iPhone SE can be replaced with those from the ‌iPhone‌ 8. This comes just days after a teardown video shared on Thursday by a Chinese YouTuber also highlighted many of the similarities between the two devices.

‌iPhone‌ 8 (left) and the new ‌iPhone‌ SE (right) via iFixit
The report mentions that the 2020 ‌iPhone‌ SE’s cameras, SIM tray, Taptic Engine, and the display assembly are all swappable with ‌iPhone‌ 8 parts. However, it is worth noting that True Tone functionality will be lost with any ‌iPhone‌ screen swap without access to a screen programmer.

The report also mentions that although some parts are very similar between the two devices, they aren’t interchangeable. The home button is not interchangeable, so iFixit recommends substituting an aftermarket version of the home button or going directly to Apple in the event of a repair. The batteries on the ‌iPhone‌ 8 and ‌iPhone‌ SE look identical, but the report notes that the ‌iPhone‌ SE’s battery logic board connector differs from that in the ‌iPhone‌ 8 and the two won’t fit together.

iFixit was overall impressed with how the new ‌iPhone‌ SE uses several parts that many repair shops already have. iFixit’s full teardown of the 2020 ‌iPhone‌ SE is currently in progress and is set to debut on Monday.Related Roundup: iPhone SE 2020Tag: iFixitBuyer’s Guide: iPhone SE (Buy Now)
This article, “iFixit Details Which Parts Can Be Swapped Between the iPhone 8 and iPhone SE” first appeared on MacRumors.com

Facebook
Twitter
Pinterest
WhatsApp
Previous articleGet in on the Bose name with these great headphones
Next articleAC Podcast 471: Juan Carlos Bagnell is more than just Some Gadget Guy