Home News Everything you need to know about weapons and SP in Final Fantasy...
News A hero is only as good as his gear.

Throughout any Final Fantasy game, your heroes will find lots of weapons to help them along the way. In Final Fantasy 7 Remake, weapons are handled a little differently than in the original. Implementing the SP system, you can level up your gear and customize each piece to suit your play style. Even better, each weapon you pick up has the potential to serve you throughout the game, so if you want to rock Cloud’s Buster Sword until the end, you can do that!

While each of your four characters starts with a weapon, there are five other weapons for each of them scattered throughout Midgar, giving you a total of 24 weapons in the game. Some are impossible to miss, while others will require a fair bit of effort to acquire. Each has a unique ability and each can be leveled up using your total SP. While every weapon has its uses, you are likely to find some that just don’t mesh well with your style of play. Cloud, the ex-SOLDIER turned mercenary, relies primarily on swords. He starts with the iconic Buster Sword and quickly gains his second blade. Tifa’s weapons are all specialized gloves since she’s a melee fighter who relies on her fists. Although Tifa is primarily used in close combat, some of her gloves can hold a lot of materia, giving her even more room for customization. 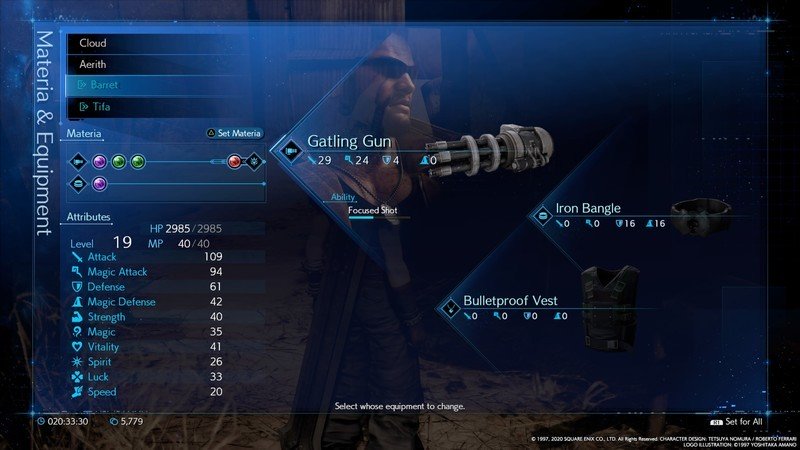 Not one to let something as minor as losing half his arm hold him back, all of Barret’s weapons are attached where his forearm used to be. Ranging from guns to specialized close combat weapons, Barret’s weapons give the most variance in utility. Aerith is a magic user connected to the very lifeforce of the planet. She uses staffs and rods to cast magic and keep a bit of space between herself and enemies. Her weapons are made for enhancing her magic.

What are weapon abilities? Every weapon in Final Fantasy 7 Remake has a weapon ability. This is a special attack that can be used in battle from the abilities menu. The more a character uses their weapon in battle, the more they increase their proficiency and when their proficiency reaches 100%, they permanently learn that ability. This means you may want to spend time using each weapon, so you can use every ability, no matter which weapon you have equipped. What is SP and how does it work?

Regardless of which weapons you choose to use, every weapon can be enhanced with the entire pool of SP your character has earned. This is good news because it means each of your weapons remains useful throughout the entire game. Most of your SP will be earned just by battling and leveling up. You can also buy an additional 10 SP for each character from the Moogle Emporium for five Moogle Medals each. When you have enough SP, you can enhance your weapons by following these easy steps:

Press the Options button to open the main menu. Press X to select the character whose weapons you wish to upgrade.

Press X to select the weapon you wish to upgrade. This will open the Weapon Core menu. Depending on how far along you are, you will be presented with a Core and potentially several Sub-Cores. Using L2 and R2, select the Core or Sub-Core you wish to enhance.

Using either the left joystick or the left and right buttons on the directional pad, move to the skill you wish to unlock. 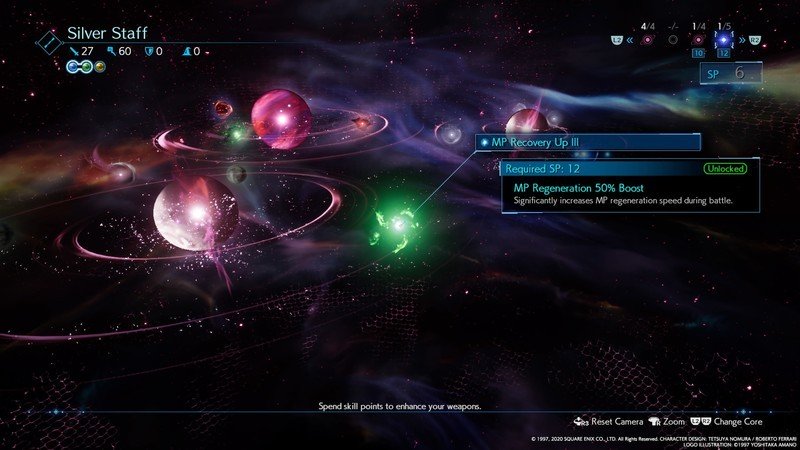 Press X to unlock the skill.
Continue until you have spent your SP.
Repeat the process on each of your weapons.

Each weapon has different skills in their Cores and Sub-Cores, giving them the potential to be used in very different ways. Some will enhance a character’s magic, while others focus more on physical attacks. Some are very well balanced, while others are specialized. Depending on your style of play, you will likely favor some weapons, but the SP system allows all of your weapons to be fully upgraded, putting them on relatively equal footing.