Prosthetics that don’t require practice: Inside the latest breakthrough in bionics 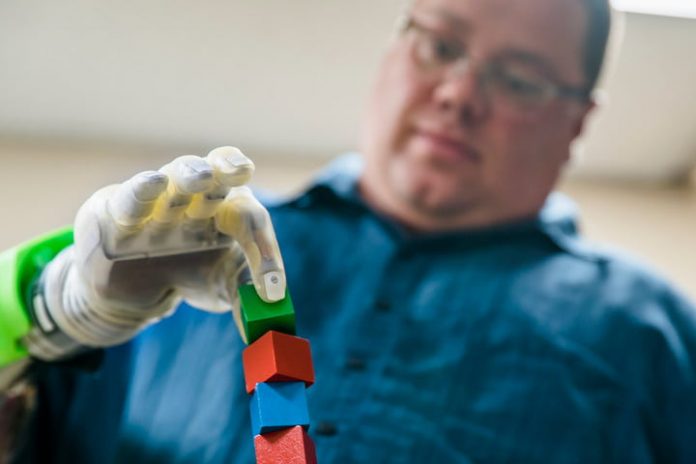 Paul Cederna dreams of a hand for every occasion.

“I can imagine somebody that has this entire suite of hands,” he said. “They’re a farmer, and they’re working on their tractor and welding and harvesting the corn — and they’ve got this heavy-duty hand that is incredibly durable, which can open and close and lift heavy, heavy things. But the farmer also happens to be a pianist. When they go inside, they put on another super lightweight hand where the fingers spread and move really fast. All this hand needs to do is to push piano keys to play the piano.”

A repeating dream of swappable hands might usually take some decoding. Not in Cederna’s case, however. For almost two decades, as professor of plastic surgery at the University of Michigan Medical School, Cederna has been working to advance prosthetics-based motor control for people with amputations. He’s not building robot hands, but rather working on the underlying medical processes that will allow people with amputations to control them using nothing more than the nerve endings in their arms.

Eighteen years ago, Cederna operated on a man with some horrific injuries. The patient, a commercial painter, had been climbing a ladder doing some work. It had rained. Electricity from a high voltage line jumped across to the aluminum ladder, causing severe burns to 50 percent of the man’s body, and burning his arm off at the level of his elbow.

Even to Cederna, who specializes in burn reconstruction, the injuries were terrible. But just as terrible, he told Digital Trends, was how little he was able to do for the patient at the time. The man, a physically active and energetic individual, was forced to rely on the most rudimentary of prosthetic setups to substitute for his missing limb.  “At that moment, we couldn’t do better than cables and rubber bands to control a prosthesis for someone like him,” Cederna said. “My motivating factor to get involved in this [field of research] in the first place were my interactions with him.”

Giving the nerves a megaphone

Jump forward to 2020, and Cederna may have fulfilled his objective. And the patient in question is reaping the benefits. Working with Cindy Chestek, associate professor of biomedical engineering in the University of Michigan’s engineering department, Cederna has devised a procedure that allows amputees to experience unparalleled real-time, finger-level control of a robotic hand. No learning required.

The medical procedure involves making small incisions over the major nerves in the patient’s residual limb. The surgeon then divides the nerve, a collection of white-gray fibers, at an appropriately healthy spot. Next, a tiny piece of muscle is removed from the leg and used to wrap around each nerve bundle. This creates a “regenerative peripheral nerve interface” or RPNI. Not only does it help prevent the growth of nerve masses that can lead to phantom limb pain, but it also gives the nerves a kind of megaphone, allowing their electrical signal to be amplified.

In two demonstrations involving patients, Cederna implanted electrodes in the muscle grafts. The electrodes are used to record nerve signals carrying instructions from the brain at a resolution that’s between 10x and 100x what they would normally be. “These are the same kind of electrodes that you might see in a cardiac pacemaker,” Chestek told Digital Trends. “They’re very small and designed to be in the body for a long time.”

Using machine learning algorithms, the researchers were able to decode this nerve information so that it can be output as a series of instructions for controlling prosthetic hands. The patients in the study were able to control the bionic hands no differently than they would an ordinary biological limb. One of those patients just so happens to be the same man that Cederna first operated on back in the early 2000s.

“He is back to life,” Cederna said. “He is mountain-climbing, hunting, fishing, he runs his own business incredibly successfully. It has really been a game-changer for him.”

An impressive range of motions

In this study, the researchers used several different hands such as a DEKA prosthetic hand that Chestek described as a “marvel of engineering in many ways. It’s very fast, and that enables the person [using it to exert] really precise control over the position and velocity of their fingers.” Wearing the DEKA prosthesis, one of the patients in the study was able to reach out and grasp a zipper, then slide it up and down.

Other demonstrations carried out using prosthetic hands included picking up blocks using a pincer grip, moving their thumb (a notoriously tricky digit for prosthetic hands) in a continuous motion, lifting spherical objects, and playing a variation of the game “Rock, Paper, Scissors.”

The work of Cederna, Chestek, and the other researchers hits another landmark, too. For the first time, Cederna said, they now have the capability to pick up detailed nerve information that goes beyond the physical abilities of today’s prosthetics.

“There’s been no reason for [prosthetic limb manufacturers] to make them any better because we actually haven’t been able to control the ones we have now,” Cederna said. “Until now. With this strategy of RPNIs, we are able to not only control those prosthetics, and take advantage of all their functionality, but [discover] additional things we can do that the prosthetics now are not yet capable of doing.”

As a demonstration of this, the researchers working on the project created a virtual hand which could be operated by patients using the same interface that they operate the physical hands. Next to the prosthetic devices used in the study, its movement is almost impossibly smooth.

“We can give [the users] much better control if they’re controlling an animated hand,” Chestek said. “[In some of our demonstrations], they can switch very rapidly between five to nine types of grasping movement. My students have worked really hard to match that with the hands that they have [to work with]. But it’s still far less than what we can do in animation.”

The complexity of the human hand makes building a robot facsimile almost mind-bogglingly difficult. But Chestek has a lifeline to throw. “We want a hand that’s fast and we want a hand that’s strong,” she said. “Those don’t need to necessarily happen at the same time.”

This is where Cederna’s vision of the switchable suite of hands comes into play. Using this approach, it could one day be possible for an amputee to be able to swap out hands depending on what they’re doing. Different hands may carry different compromises, but this would make it possible to perform any task required. Until, that is, someone can build the perfect all-purpose bionic hand. For now, that remains a dream. But thanks to the pioneering work being carried out at the University of Michigan, it’s a dream that’s closer than ever to becoming a reality.

A paper describing the team’s work was recently published in the journal Science Translational Medicine.